You are here: Home / Autoimmunity / Why Seaweed is Amazing!

Creative chefs have long known that seaweed is a tasty vegetable that can liven up a meal. But, it just so happens to be one of the most nutrient-dense plant foods as well! Seaweed is teeming with essential minerals, carotenoids, and even long-chain omega-3 fatty acids, making it a powerful addition to our diets. In fact, the benefits of seaweed are even greater than most of us realize. Let’s take a closer look at this amazing food!

Most of us are familiar with the nori that wraps sushi rolls, but list of edible seaweeds definitely 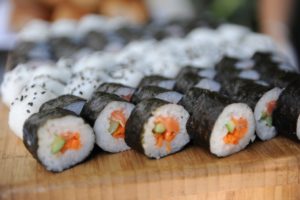 doesn’t end there. Other types of seaweed fit for human consumption include:

I have dried versions of all of the above in my pantry at all times!

Plenty of vegetables have impressive nutritional résumés, but seaweeds really take the cake (er, the salad)! Although each variety of seaweed has a different overall profile of vitamins and minerals, in general, you can expect these foods to be rich in:

On top of all that, seaweeds have some special components that aren’t found in any land-based vegetables, and which may be responsible for some of their unique health benefits:

Numerous studies have shown that some components in seaweed help fight inflammation! The fucoxanthin in seaweed is the biggie here: it can inhibit nitric oxide synthase (iNOS) and cyclooxygenase 2 (COX-2) protein expressions, and also suppress the production of a variety of inflammatory cytokines (like IL-1β, TNF-α, and IL-6). That might sound like a lot of complicated science, but basically, it just means that the carotenoid in seaweed can tank pro-inflammatory mediators and help reduce excessive inflammation in the body. (Of course, that has a risk-lowering effect for the numerous conditions that stem from chronic inflammation, too!)

Among seaweed’s many perks is the potential to cardiovascular health! The antioxidant and anti-inflammatory properties of fucoxanthin can help thwart multiple processes involved in the progression of heart disease, while also modulating immune function. And, research has shown that a many seaweeds have hypolipidemic (lipid-lowering) activity, helping reduce levels of triglycerides and LDL cholesterol. And, the DHA found in algae and algal oil can not only reduce triglycerides and LDL cholesterol, but also raise HDL cholesterol—which, collectively, paint a more favorable picture for combating heart disease!

Seaweed for Cancer Prevention and Treatment

In Traditional Chinese Medicine and Japanese folk medicine, seaweeds have long been used to treat tumors, and Western science is beginning to discover why! Multiple studies have shown that seaweed can increase apoptosis (programmed death) of tumor cells, prevent the growth of new blood vessels that supply tumors, inhibit tumor cell adhesion, and prevent metastasis. Whew! That’s a pretty impressive lineup, huh? And, even small amounts of seaweed seem to have a big effect. In one study of postmenopausal women, consuming just 5 grams of brown seaweed each day resulted in a 50% drop in a type of receptor that’s over-expressed in cancer (urokinase-type plasminogen activator receptor, or uPAR, which is involved in multiple signaling pathways, cell adhesion, inflammation, immune function activation, tissue repair, and a number of other functions). The key players behind seaweed’s anti-cancer effects may be its fucoxanthin content, its polyphenolic compounds, its sulfated polysaccharides (fucoidan and laminarin), its ability to increase the colon’s protective mucus bilayer, and its ability to bind dietary toxins and carcinogens by increasing stool bulk.

The Gut Health Cookbook puts theory into practice with 150+ delicious recipes that each center on at least one of 60 gut health superfood ingredients.

For a limited time, get the Gut Health Collection for $39.99

In fact, the traditional use of seaweed in some parts of Asia (like Japan) may help explain why those areas have much lower rates of certain cancers (especially breast cancer) than most Westernized nations!

Another incredible feature of seaweed is its antiviral potential. The sulfated polysaccharides in seaweed can block the interaction between many viruses and host cells—including important pathogens like HIV, herpes simplex, dengue virus, respiratory syncytial virus, and human cytomegalovirus. And, seaweed appears to contain other antiviral components that are enhanced by light (especially UVA) and not only protect our cells, but can directly inactivate the virus particles themselves. How cool is that?

What About Heavy Metal Toxicity?

As with any food that comes from the ocean, there’s some concern about seaweed accumulating heavy metals from polluted waters. Fortunately, a number of researchers and seaweed manufacturers have begun testing seaweed samples to ensure safety, and to identify any high-risk seaweed species!

The good news is, only one type of seaweed has consistently shown up as dangerous: hijiki, which frequently tests high for arsenic. Other types of seaweed (especially ones harvested or imported into the US) generally contain levels of heavy metals so low that even an extremely high seaweed intake would still be fine.

But, just to be safe, it’s smart to buy seaweeds from companies that perform regular testing on their products to ensure low levels of any dangerous contaminants.

Algae, such as chlorella and spirulina (typically found in supplements but also in prepackaged green juices), differ from their seaweed cousins in many ways. In partiular, they are single-celled organisms as opposed to the multi-cellular seaweeds.

There is evidence that chlorella, which is a freshwater green algae, contains lipopolysaccharide in its cell membrane.  Lipopolysaccharide, also called endotoxin, is the same toxic protein in the cell walls of Gram-negative bacteria like Escherichia coli. It has also been shown to increase inflammation and stimulate Th1 cells.

Spirulina is commonly referred to as a blue-green algae, but it’s actually a Gram-negative, non-toxic species of cyanobacteria.  It  grows in saltwater lakes in Mexico and Africa.  Spirulina also contains lipopolysaccharide in its cell membrane; and studies show that it activates the innate immune system (causing inflammation) and stimulates Th1 cells. Other studies show that it may suppress Th2 cells as well.

While seaweed is amazing, the same can’t necessarily be said of algae due to immune stimulating properties.

What About the Mucilage?

As I wrote about in a previous post, seaweeds (and certain other foods like flaxseed and chia seeds) are high in a type of soluble fiber called mucilage. This fiber has legitimate health-boosting effects (especially for gut health), but can also stimulate the immune system (both Th1 and Th2, depending on the source of the mucilage)—making it potentially problematic for certain people with autoimmune conditions. And, because mucilage can be hydrolyzed into simple sugars like xylose, glucose, rhamnose, and galactose, pathogenic bacteria (like Clostridium difficile and Escherichia coli) can potentially thrive.

For people who already have over-stimulated immune systems, the best bet is to avoid the highest-mucilage seaweeds (especially kombu and agar agar) and stick to varieties lower in mucilage, such as dulse, and avoid isolated mucialage fibers (found in some supplements). There are so many amazing benefits to seaweeds that they’re really not worth cutting out of our diets completely unless they’re clearly aggravating an existing health problem!

That All Sounds Great… But How Do We Eat The Stuff?!

So, how can we incorporate more of this amazing food into our diets? Here are some ideas!

Also, some components of seaweed (particularly fucoxanthin) require dietary fat to be best absorbed, so consuming seaweed in a meal with a fat-rich food (like avocado, olive oil, or sesame oil if you tolerate it) will enhance the nutritional perks!

All in all, seaweed is truly a powerhouse in terms of nutrition and health-promoting compounds. Enjoy this gift from the sea in whichever ways your taste buds prefer!

Armstrong PB, et al. Immunohistochemical demonstration of a lipopolysaccharide in the cell wall of a eukaryote, the green alga, Chlorella. Biol Bull. 2002 Oct;203(2):203-4.