Check it out!
Home » Blog » The Health Benefits of Alliums (Onion Family)
FacebookTweetPinLinkedIn 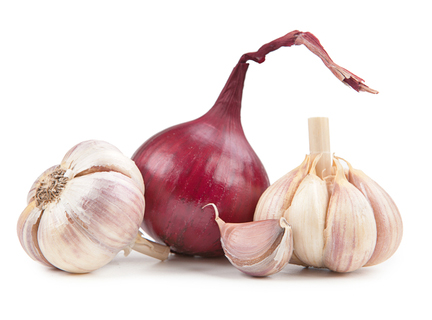 The onion family, also known as alliums, includes hundreds of different species belonging to the genus Allium, although the ones we’re most likely to see on a dinner plate are onions, garlic, leeks, chives, scallions, and shallots. The word “allium” is believed to derive from the Greek ἀλέω (or aleo), which means “avoid,” and refers to the potent odor of these vegetables! (Indeed, alliums contain an enzyme called alliinase that produces volatile sulfur compounds when their plant tissue gets damaged, leading to their characteristic aroma and taste. These compounds also help keep the plants safe from pests!)

Alliums in general have been cultivated since prehistoric times for use as food, medicine, and religious practices, and each individual vegetable also has its own unique history.

For instance, garlic has been used for over 7000 years, originating in Central Asia but quickly becoming popular in the Mediterranean region as well, where it has been used both as food and as traditional medicine. Modern scientific interest in garlic’s medicinal benefits was inspired by Louis Pasteur, who recorded the antibacterial properties of this food in 1858. Garlic was even used as an antiseptic to prevent gangrene in World Wars I and II due to these potent antimicrobial effects!

Meanwhile, onions are the most widely cultivated member of the allium group, and are grown around the world because of their diversity and unique flavor. Historically, onions have been a part of the human diet since the Bronze Age (archaeologists have found traces of them in settlements dating back to 5000 BC!), and ever since then, they’ve played an important role in various cultures. For instance, Ancient Greeks used to eat pounds of onions in preparation for Olympic competitions, and Ancient Egyptians considered onions to symbolize eternity, due to their concentric rings and spherical shape (onions were even buried alongside Pharaohs in their tombs; King Ramses IV was even entombed with onions in his eye sockets!). And, the reason onions make us cry when we cut them? A chemical called syn-Propanethial S-oxide (C3H6OS) gets formed enzymatically from the combination of amino acid sulfoxides and lachrymatory-factor synthase found in onion, in turn irritating the lachrymal glands in the eyes and producing tears and stinging!

Leeks, which are a bundle of leaf sheaths rather than a tight bulb like onions, have a mild, oniony taste and can be eaten raw or cooked. Humans have been cultivating leeks since at least the Ancient Egyptian times, but there is some evidence that they were grown in Mesopotamia as well. Chives are the only allium variety that are true herbs, and are native to both the Old World and New World, with cultivation dating back 5000 years. Scallions (also called green onions) have hollow green leaves and lack a fully developed bulb, and have been used in Asian cultures for at least 2000 years as both a vegetable and medicinal herb. And, shallots are technically a type of onion (after having previously been classified as a different species!); they’re native to the Middle East, where they served a food staple in Ancient Egypt and were considered sacred by the Persians. 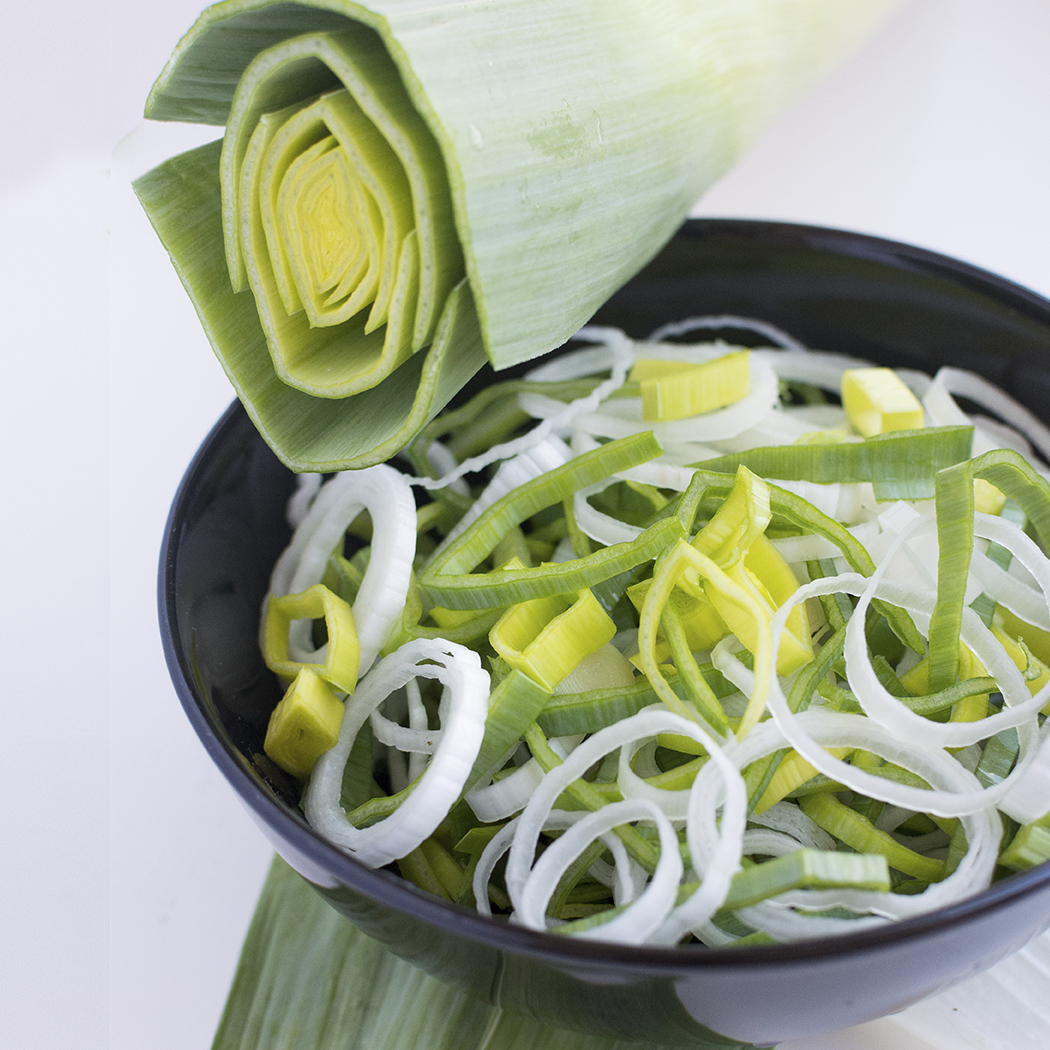 Nutritionally, alliums don’t provide much in the way of macronutrients (at least not in the quantities we typically consume them!), but they do deliver important micronutrients and phytonutrients, as well as fiber. For example,

What’s more, alliums boast a number of important phytonutrients—most notably the organosulfur compounds (such as cepaenes and thiosulfinates) that characterize their taste, but also kaempferol, quercetin, fructans, ferulic acid, caffeic acid, anthocyanins (in red- or purple-colored alliums), flavonols (in yellow-fleshed and brown-skinned onions), chlorophyll (in leeks, chives, and scallions), saponins, and myricetin and apigenin (especially in garlic). It turns out that all of the varieties of onions (shallots, white, yellow, and red especially) differ among each other both in taste and in polyphenol content! Shallots have the highest amount of polyphenols, with six times more than vidalia; yellow onions have the highest flavonoid content; and red onions have the highest level of anthocyanins (which contributes to their red pigmentation). See also The Amazing World of Plant Phytochemicals: Why a diet rich in veggies is so important! and Polyphenols: Magic Bullet or Health Hype? 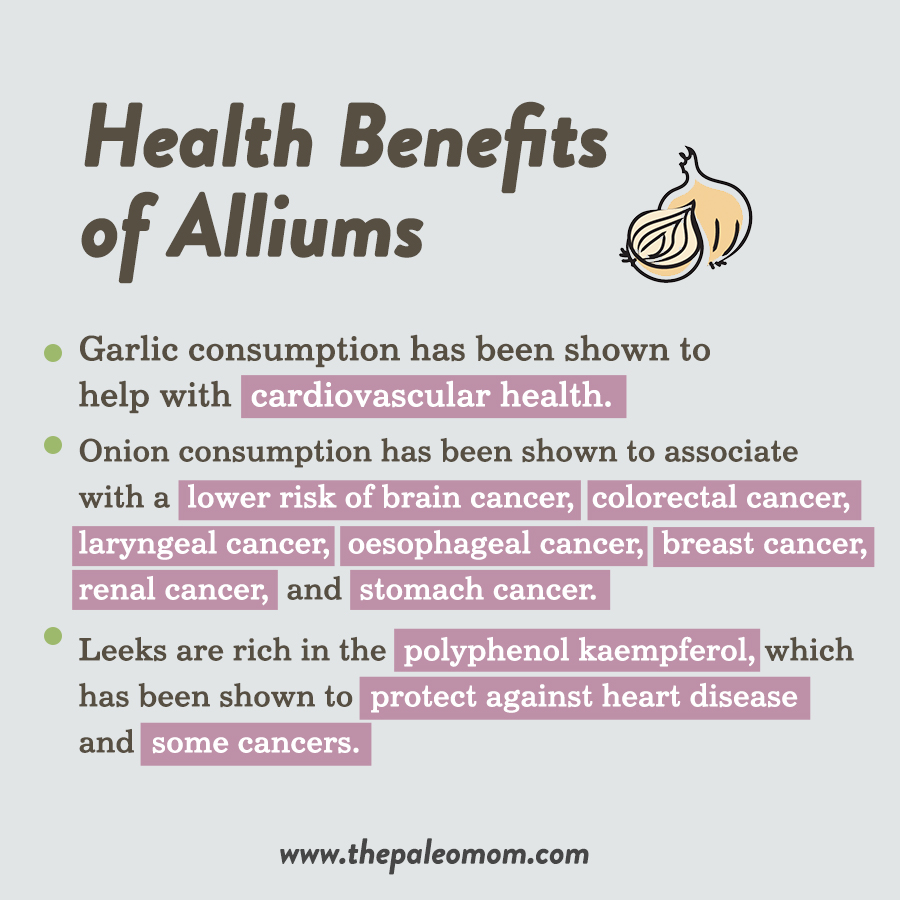 Members of the allium family are known for being incredibly health promoting!

For example, garlic consumption has been shown to help with cardiovascular health (specifically, lowering total cholesterol and LDL cholesterol, by inhibiting the enzymes involved in cholesterol and fatty acid synthesis), and some epidemiological work has shown garlic consumption to be associated with reduced risk of GI cancers and prostate cancer (with additional research showing that garlic can inhibit phase 1 enzymes but induce phase 2 enzymes). It also appears to help reduce platelet clumping and clot formation, possibly due to mechanisms related to inhibiting calcium mobilization. One study showed that red blood cells isolated from garlic-supplemented rats with high cholesterol had improved fluidity.

Onion consumption has been shown to associate with lower risk of brain cancer, colorectal cancer, laryngeal cancer, oesophageal cancer, breast cancer, renal cancer, and stomach cancer, as well as reduced symptoms of osteoporosis and inhibition of platelet-mediated thrombosis. One study found that men consuming 10 grams of onions per day were 70% less likely to develop prostate cancer than men consuming under 2 grams of onions daily.

Research has demonstrated that the polyphenols and organosulfur compounds in alliums are the main chemical groups responsible for these benefits, along with the fiber inulin. The quercetin, anthocyanins, and alk(en)yl cysteine sulphoxides found in onions have been shown to have anti-cancer, anti- thrombotic, anti-asthmatic, and antibiotic activities. The chlorophyll in green-pigmented alliums (particularly scallions, leeks, and chives) may help reduce cancer risk by binding to potential carcinogens (including food-derived heterocyclic amines) and preventing them from getting absorbed. Meanwhile, leeks are rich in the polyphenol kaempferol, which has been shown to protect against heart disease and some cancers.

There is also evidence that organosulfur compounds in alliums, which include dithiolethiones, diallyl sulfide, and sulforaphane, can help protect against stomach and colorectal cancers (due to inhibiting carcinogenesis in various parts of the digestive tract, including the forestomach, esophagus, and colon); they can also reduce symptoms associated with diabetes, inhibit platelet aggregation, and prevent the inflammatory processes associated with asthma. Organosulfur compounds exert their effects by modulating important enzymes (the cytochrome P450 family and glutathione S-transferases) that help detoxify carcinogens and prevent DNA adducts from forming. One specific organosulfur compound, diallyl sulfide, also has potent antimicrobial properties and can help fight the stomach ulcer bacteria, H. pylori. And, some research has shown that organosulfur compounds can stimulate the body’s synthesis of the important antioxidant glutathione.

Alliums Are Great for Gut Health 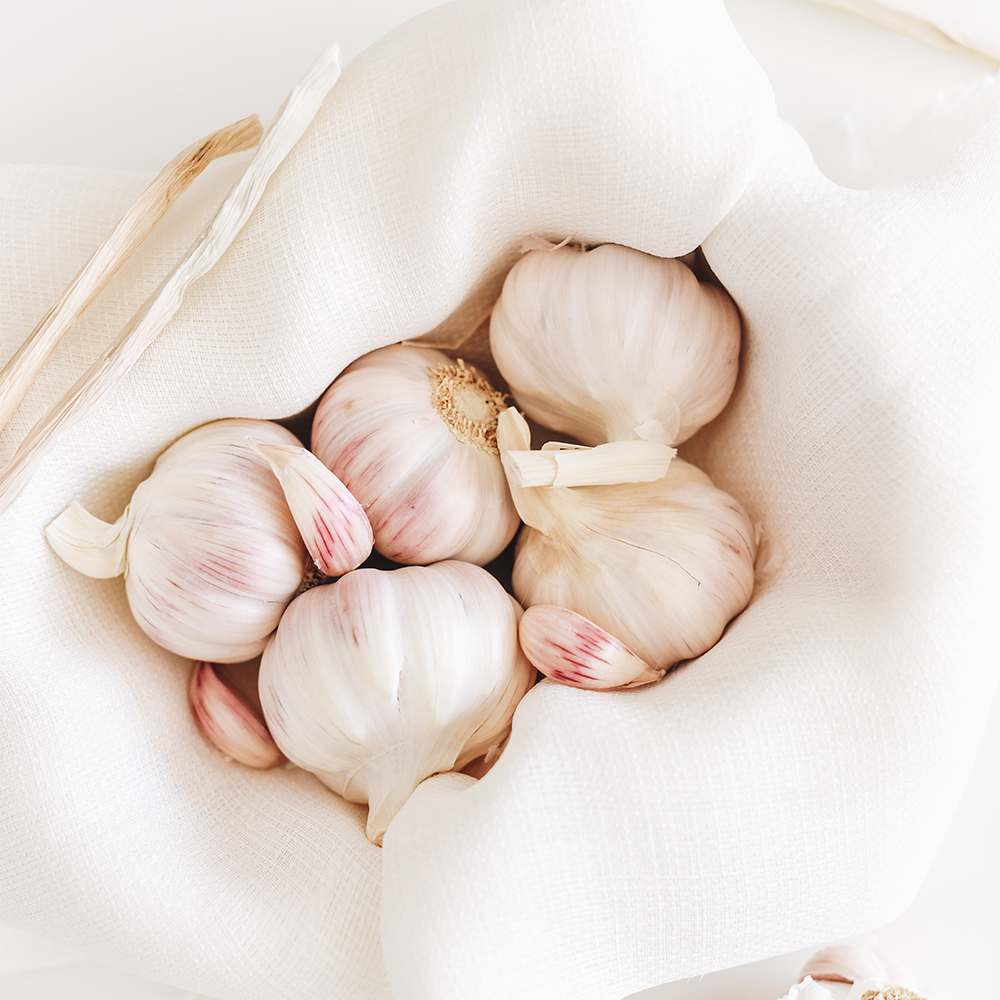 Given the high prebiotic content and antibacterial components of alliums (especially their carbohydrates and organosulfur compounds), it’s no surprise they can have a significant effect on the gut microbiota! (See also What Is the Gut Microbiome? And Why Should We Care About It?)

For example, onion bulbs contain significant fructans (up to 40% of their dry weight!), which promote the growth of beneficial microbes and can be fermented into SCFAs. Garlic is well-known for producing allicin, which gets created by the interaction of alliin and alliinase when garlic is chopped or crushed. In mice with alcoholic fatty liver disease, allicin from garlic (5 and 20 mg per kg of bodyweight per day, for four weeks) has been shown to reduce intestinal permeability and suppress levels of Ruminococcaceae members, as well as reduce the ratio of Firmicutes to Bacteroidetes; allium at 20 mg per kg of bodyweight daily also reduces plasma endotoxin levels. Additional research has shown that allicin may exert a protective effect against heart disease by modulating the gut microbiota—more specifically, by altering bacteria composition in ways that reduce the production of TMAO from dietary carnitine. In addition, allicin from garlic also possesses antimicrobial activity against a range of Gram-positive and Gram-negative bacteria, including E. coli, Candida albicans, and even the parasite Giardia. 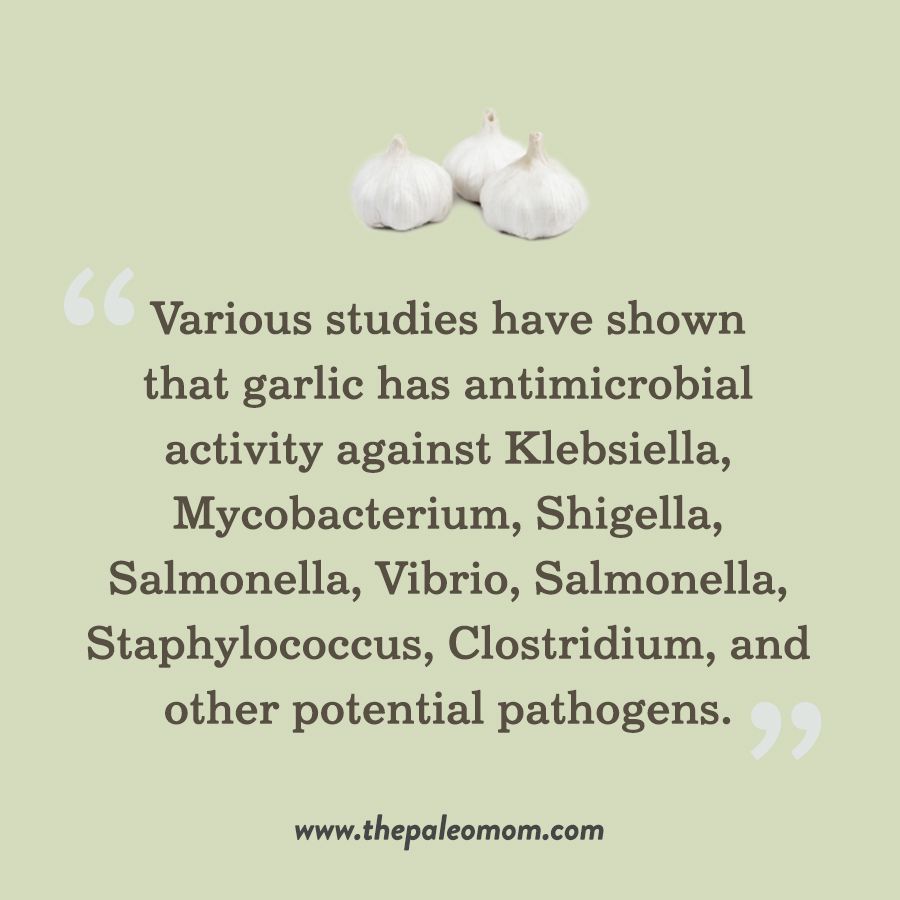 However, allicin isn’t the only reason garlic is good for the gut! One study tested allicin-free garlic in mice fed normal or high-fat diets, at concentrations of 1% or 5% of feed, for a total of 11 weeks. The allicin-free garlic helped counteract increases in the Firmicutes/Bacteroidetes ratio caused by the high-fat diet and aging, while specifically enhancing the abundance of Lachnospiraceae, Akkermansia, and Lactobacillus. This suggests that garlic, independent of allicin, can help protect against some gut microbiota disturbances related to diet and age. In a different mouse study, garlic consumption for 12 weeks (in conjunction with either a normal diet or a high-fat diet) increased the relative abundance of Lachnospiraceae and decreased the relative abundance of Prevotella, while also ameliorating the reduced ratio of intestinal villus height/crypt depth induced by the high-fat diet, reducing plasma insulin and HOMA-IR in the high-fat group, suggesting a benefit for insulin sensitivity. In addition to all this, various studies have shown that garlic has antimicrobial activity against Klebsiella, Mycobacterium, Shigella, Salmonella, Vibrio, Salmonella, Staphylococcus, Clostridium, and other potential pathogens. Specifically, the polyphenol extracts from garlic, as separate from allicin, can inhibit the microbes Staphylococcus aureus and Salmonella enteriditis.

Onions are rich sources of flavonols, particularly quercetin glycosides, which in turn serve as substrate for gut bacteria (especially Flavonifractor plautii and Eubacterium ramulus). In rats, adding onion to a high cholesterol/high cholic acid diet significantly changes the composition of bile acids in the feces indicative of increased reabsorption of bile acids in the intestine and decreased bile acid deconjugation, likely due to fermentation of onion components leading to altered gut bacteria composition and subsequently increased bile acid retention. In broiler chicks, onion supplementation (1.5, 2, or 2.5 g/kg of feed) significantly reduced levels of E. coli while significantly enhancing the abundance of Lactobacillus and Streptococcus.

Onion Family for the Win!

So there we have it! Not only do alliums offer a unique and irreplaceable flavor for our food; they’re also fantastic for supporting whole-body health.

Here’s a handy-dandy list of alliums, for your convenience!