Why Root Veggies Are Great for the Gut Microbiome 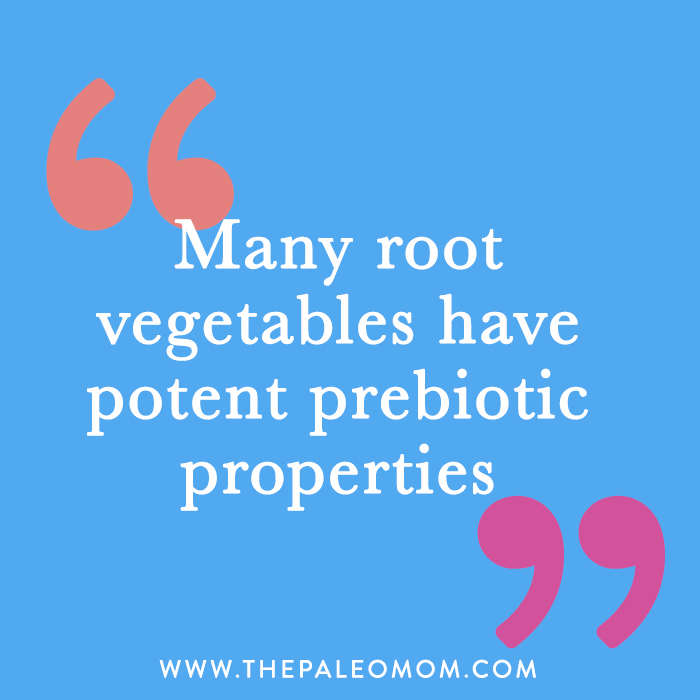 When it comes to nutrient-dense carbs, root veggies are hard to beat: foods like sweet potatoes, carrots, and cassava are not only delicious, they’re also great sources of vitamins, minerals, phytochemicals, and fiber. (Be sure to check out my posts The Case for More Carbs: Insulin’s Non-Metabolic Roles in the Human Body, How Many Carbs Should We Eat?, 5 Weird Root Vegetables Everyone Needs to Try and Potatoes: Friend or Foe?)

Luckily for us root lovers, these vegetables come with another major benefit as well: they’re a total boon for our gut microbiota! Many root vegetables have potent prebiotic properties (try saying that five times fast!), feeding the beneficial bacteria in our colon and supporting a healthy composition of gut microbes (see What Is the Gut Microbiome? And Why Should We Care About It? for a deeper dive into what the microbiome is and why it’s so important!). Let’s take a look at the unique ways root vegetables help sustain a healthy community of gut critters.

Root vegetables contain a variety of carbohydrates that feed two important groups of probiotic bacteria: Bifidobacterium and Lactobacillus. Bifidobacteria carry out a huge number of roles, including producing vitamins, preventing pathogens from colonizing the gut mucosa (including E. coli), protecting against yeast overgrowths, improving the gut barrier function, and reducing endotoxin transport. Likewise, lactobacilli (including the most widely used probiotic, Lactobacillus acidophilus) help inhibit the growth of pathogens such as H. pylori (through a process called “competitive exclusion”), and some species have anti-cancer and anti-diabetic effects. Basically, these bacteria are essential probiotic residents of a healthy gut, so it’s crazy important to make choices that support their growth! 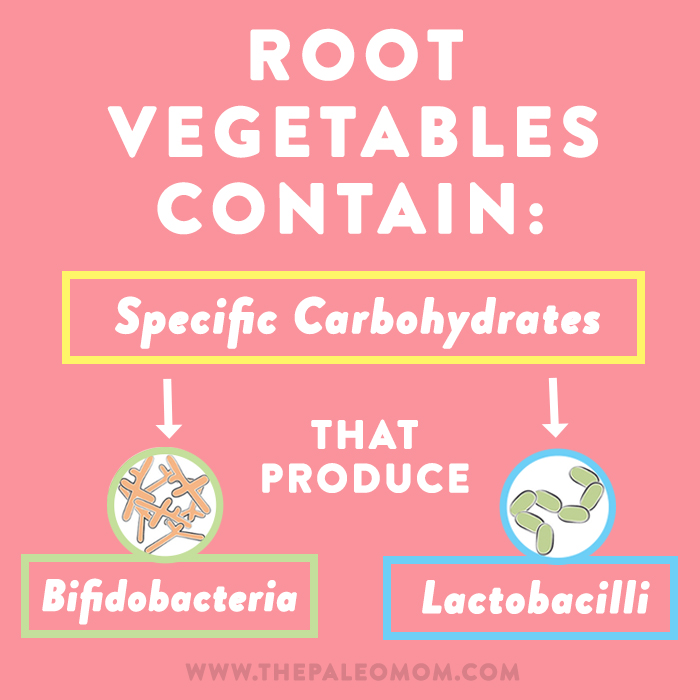 And, root veggies are well-proven promoters of these incredible microbes! In one study using an in-vitro fermentation system along with human fecal slurry, two different sweet potato varieties significantly increased levels of Bifidobacterium over the course of 24 hours. Cassava (a starchy root that’s also the source of tapioca) has likewise been shown to stimulate bifidobacteria and lactobacilli growth. In a study of oligosaccharides liberated from cassava pulp, levels of Lactobacillus gasseri (which has significant anti-inflammatory activity) and Bifidobacterium breve (which can potentially improve fat metabolism and skin health) increased dramatically, while also boosting populations of Lactobacillus reuteri (which produces vitamin B12 and folate), Lactobacillus acidophilus (which helps restore the microbiota after antibiotic treatment), and Bifidobacterium adolescentis (which reduces the mineral-binding effects of phytic acid) to varying degrees. In rats, feeding crackers comprised of cassava fiber and wheat flour (in ratios of 60:40 or 50:50) resulted in an increased Lactobacillus count, and in mice, xylooligosaccharides derived from cassava dregs (another byproduct of cassava starch processing) was likewise shown to promote the growth of Bifidobacterium and Lactobacillus species. In another study, inulin extracted from burdock root (a vegetable common in northern Asian cuisines, and which makes a great addition to stir fries, braises, and soups!) significantly boosted counts of lactobacilli and bifidobacteria in vitro.

In several other studies, Jerusalem artichokes (no relation to actual artichokes!) was able to enhance levels of several Lactobacillus and Bifidobacterium species across a variety of animals, due to its high concentration of fructooligosaccharides (or FOS), a subtype of inulin that isn’t digested in the small intestine and serves as a potent prebiotic for colonic microbes. Another root veggie rich in FOS is yacon (a slightly sweet tuber native to the Andes), and animal studies have also shown that a diet rich in yacon or yacon flour enhances the growth of bifidobacteria and lactobacilli. One rat study found that within one week of eating a diet containing 10% yacon root, the intestinal environment was significantly altered due to the abundant fermentation of yacon, leading to a significant increase in Lactobacillus acidophilus, Bifidobacterium pseudolongum, and Bifidobacterium animalis. (Some yacon crops contain up to 70% fructooligosaccharides on a dry-matter basis, so it’s no surprise this root veggie is an effective prebiotic!) 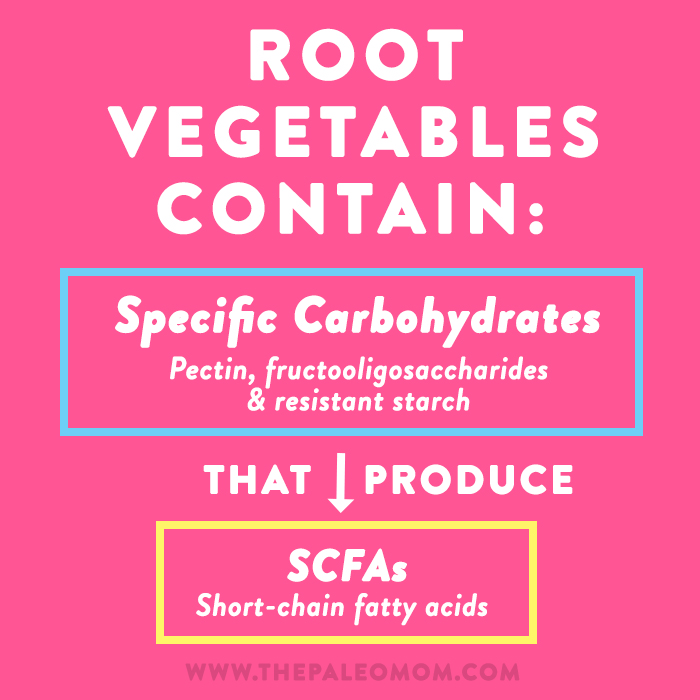 Short-chain fatty acids, or SCFAs (including butyric acid, acetic acid, and propionic acid) are produced from fiber fermentation by specific bacteria groups in the gut. Along with serving as the main food source for intestinal epithelial cells, SCFAs offer an enormous list of benefits for our health, including reducing the risk of inflammatory diseases, protecting against obesity and diabetes, and reducing the risk of heart disease. And, it just so happens that the carbohydrates that get fermented into SCFAs are found abundantly in most root vegetables, such as pectin (high in carrots), fructooligosaccharides (abundant in Jerusalem artichokes, burdock root, chicory root, and yacon), and resistant starch in the form of RS3 (high in cassava and cooked and cooled potatoes) (for more on resistant starch, including why RS3 may be superior to other resistant starch subclasses, see Resistant Starch: It’s Not All Sunshine and Roses!)

In rodents, diets supplemented with yacon or yacon flour have been shown to increase levels of SCFAs. Rats fed a diet containing 6% fructooligosaccharides and inulin from yacon (compared to a yacon-free control diet) experienced a beneficial modulation of the gut microbiome, including a significant increase in butyrate levels. Another rat study found that a week-long diet containing 10% yacon root led to SCFA production that was 70% greater than when fructooligosaccharides alone were used, suggesting non-FOS components of yacon were being fermented into SCFAs, too!

And, when it comes to SCFAs, potatoes deserve a special mention! Potatoes that have been cooked and cooled to create retrograded resistant starch have been shown to significantly boost SCFA production, as has raw potato starch. And, ongoing consumption of resistant starch from potatoes appears to reshape the microbiota over time to generate even more SCFAs. In a study of rats, for example, resistant potato starch had a butyrogenic effect that increased over time, with butyrate production increasing six-fold after six months of consumption compared to half a month of consumption. (That suggests a slow adaptive process occurring within the GI tract, and makes a strong case for consistently including resistant starch in our diets for maximum SCFA-producing benefit!). See also Potatoes: Friend or Foe of Paleo?

Intriguingly, different sources of resistant starch can have significantly different impacts on SCFA production, and it turns out that RS3-containing root veggies may have some benefits over RS3-containing grains! This is because even within resistant starch subclasses, subtle variations in structure can influence the response of the microbiota. For example, depending on the food source they come from, the double-helix shape formed in retrograded resistant starch (RS3) results in crystalline entities with different shapes that support the growth of different bacteria. What scientists call the “A-type polymorphic form” (generated from cereal grains) forms double-helix shapes with a more compact, dry structure, while the “B-type polymorphic form” (generated from tubers with a high amylose content) forms a more open helix shape with higher water content. In studies, B-type forms result in higher butyrate production than A-type forms, suggesting that foods like cassava and cooked and cooled potatoes are better for increasing butyrate levels than grains are! 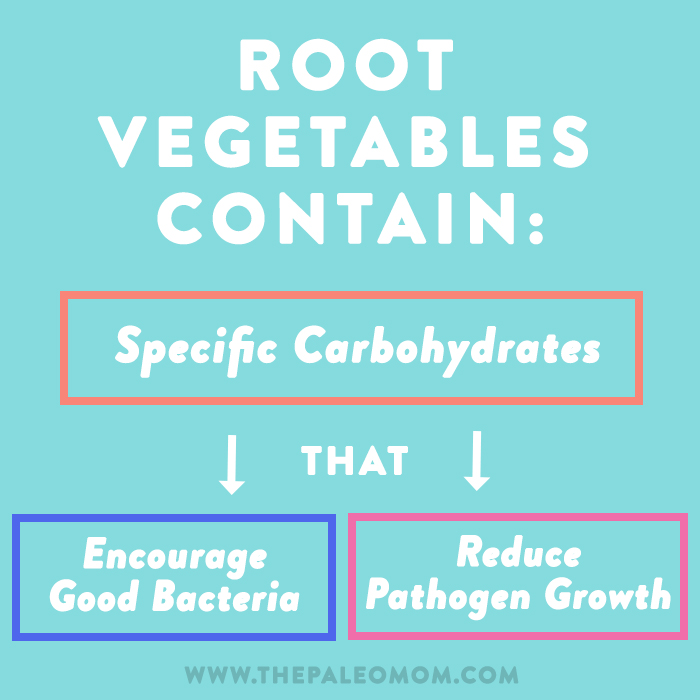 As a result of altering the intestinal environment, root veggies can help prevent pathogens from colonizing and infecting the gut! In rats, grain products supplemented with cassava fiber resulted in lower levels of Escherichia coli in the animals’ feces (while also promoting a greater abundance of probiotic bacteria), suggesting an ability to selectively suppress the growth of some pathogens while allowing the “good guys” to flourish. In mice, components of cassava root were likewise shown to decrease the number of Escherichia coli present.

And, some root veggies contain compounds other than fiber that suppress pathogen growth. Yacon, for instance, contains natural antimicrobial substances, as evidenced by the fact that yacon crops require almost no pesticides to cultivate! Some of these substances have antibacterial activity against not only plant pathogens, but also ones known to infect humans, including Bacillus subtilis and Staphylococcus aureus. One mouse experiment even showed that yacon flour could prevent intestinal infection from Salmonella enterica serovar Typhimurium (S. Typhimurium), due to its ability to enhance non-specific immunity and improve the immunological intestinal barrier. Even carrots contain compounds that reduce pathogen growth. In one experiment, extracts from peeled and shredded carrots were able to inhibit an array of harmful bacteria including Listeria monocytogenes, Staphylococcus aureus, Pseudonomas fluorescens, Candida lambica, and Escherichia coli.

Root Veggies for the Win!

So there we have it: in case we needed more reasons to add these delicious, versatile, and nutrient-packed veggies into our diet, we can do it for our gut!