Without grains, where do we find carbohydrates on the Paleo diet? While some people erroneously believe following a Paleo template to be equivalent to following a low-carb diet, carbs are not only abundant in all sorts of veggies and in fruits, but they’re also nothing to fear (see How Many Carbs Should You Eat? and Carbs Vs. Protein Vs. Fat: Insight from Hunter-Gatherers).

Root vegetables are a fantastic source of starchy carbohydrates, while containing far more vitamins, minerals and phytochemicals than those starchy carbs eschewed by us Paleo folks (like corn, rice or wheat). These carbs can be a fantastic source of glucose after a workout, are beneficial in helping us sleep, and can help regulate a number of hormones, not to mention being a perfect side dish to any protein. But if you’re bored by potatoes, sweet potatoes and winter squash, try switching it up! These five “weird” root vegetables are a fabulous way to vary your diet and get in the full complement of micronutrients along with a serving of carbs! 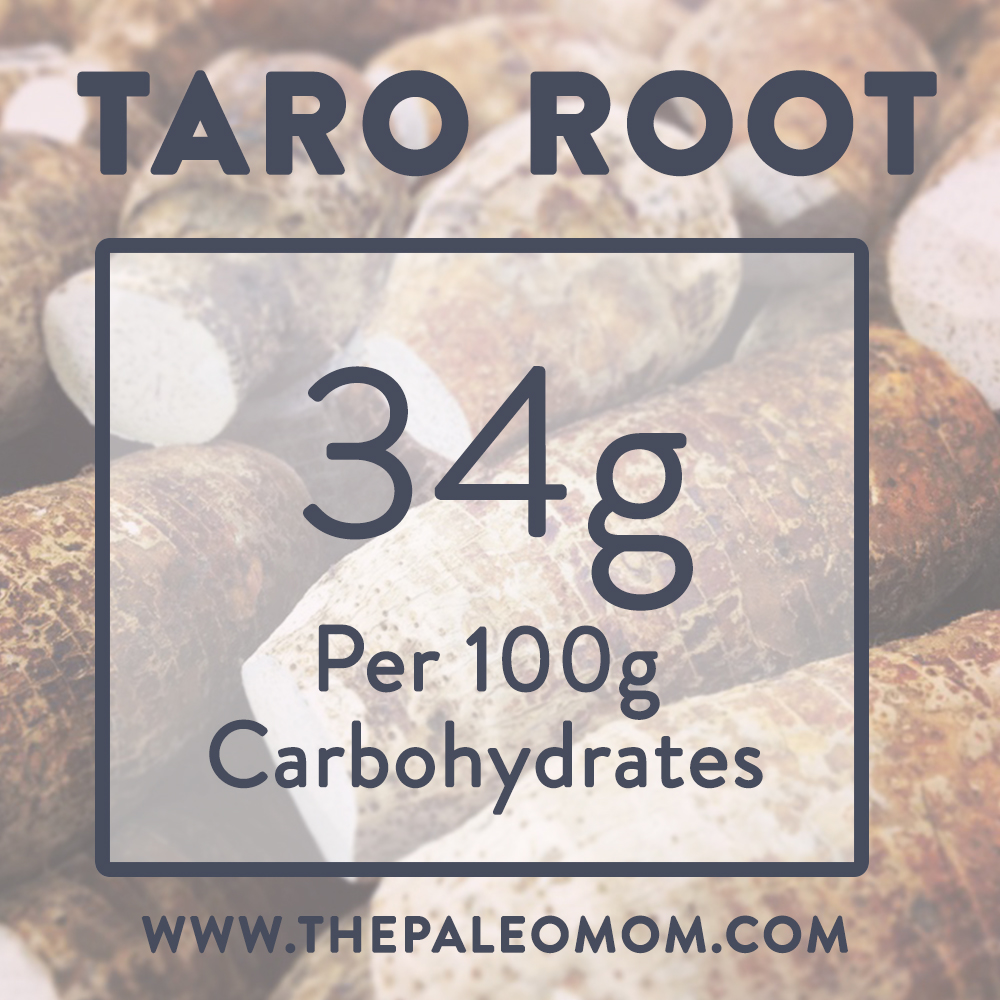 Taro generally refers to the corm of a large, leafy plant (“corms” refer to a modified, underground stem – kind of like a tuber, but the purpose isn’t just storage of starch). Though it is not commonly used in the United States, taro is a staple food in African, Oceanic, and South Indian cultures, where it is believed to be one of the very earliest cultivated plants ever (isn’t that cool?!).

From a nutritional perspective, taro root is almost entirely carbohydrate (34.6g/100g), but it is also a pretty decent source of dietary fiber (5.1g/100g). It’s a great source of vitamins E and B6 as well as the dietary mineral manganese. Taro is actually a source of every other essential vitamin and mineral, but it is found in smaller or trace amounts.

From a cooking perspective, taro is very unique! The key to dealing with this tuber is to steam it, which allows you to remove the hairy (not as bad as it sounds, LOL!) skin and cuts down on the sliminess (again, totally worth it!).

I think it’s great alone, as in my Savory Roasted Taro, where the flavor is somewhat reminiscent of a potato, with maybe a little more sweetness. It can also be used to create a unique, creamy texture in other dishes, like my Kale and Okra Soup. I’ve even experimented with using taro as a source of starch in baking! If you want to get that experimental, check out my Nut-Free Paleo Biscuits. 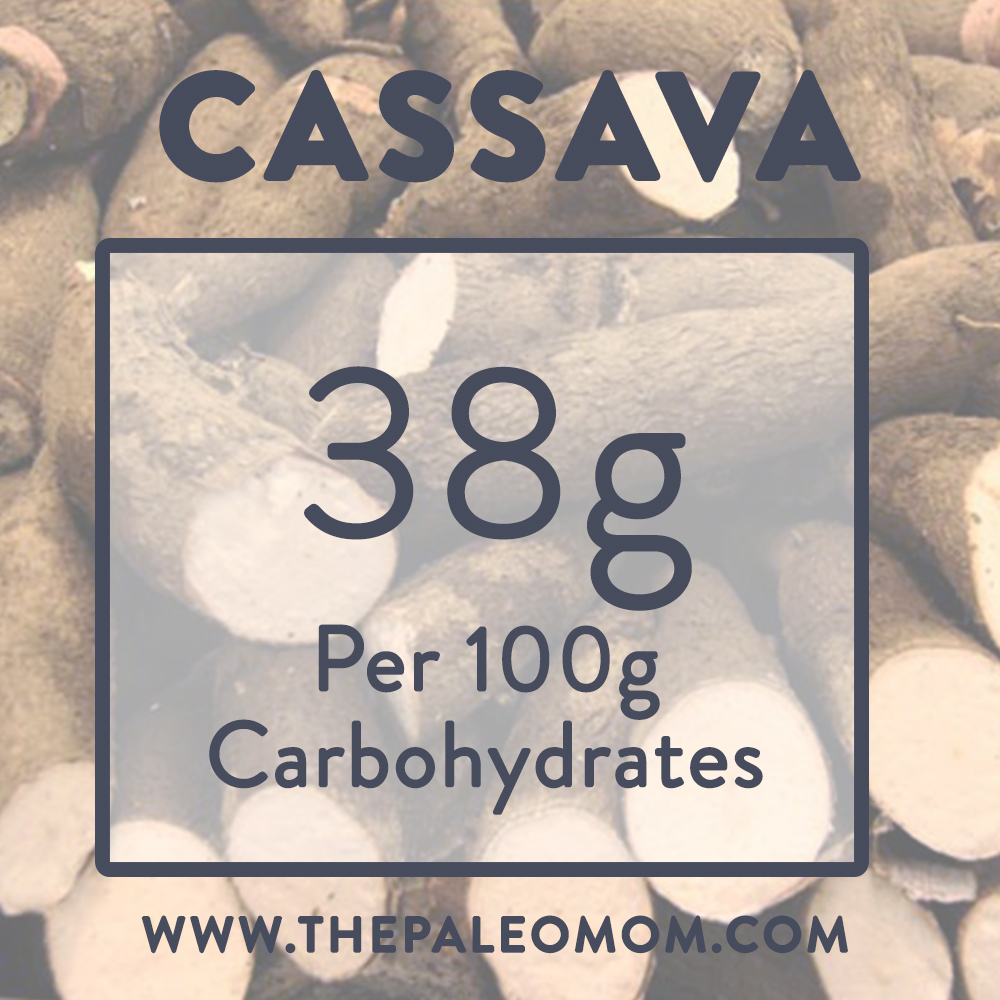 Cassava is also known as yucca, yuca, manioc, tapioca and Brazilian arrowroot. Cassava is a tuberous, starchy root native to South America, but since it’s one of the most drought-resistant crops in the world (it’s capable of growing in even depleted and marginal soils), it’s a staple of diets all over the world!

Cassava certainly tastes very starchy, and contains about 38g/100g, meaning it’s about the same in terms of carbohydrates as taro and about twice as carbohydrate heavy as a white potato. However, it’s fairly low on the Glycemic Index, and I find I tolerate this delightfully starchy tuber very well!

I love to prepare cassava as Cassava Oven Fries, because it’s a fairly simple and enormously tasty alternative to french fries for someone like me who can’t tolerate nightshades (see Potatoes: Friend or Foe of Paleo? and What Are Nightshades?). However, cassava might be my favorite root veggie because it’s so incredibly versatile!

Cassava Flour is another fabulous way to get in a lot of carbohydrates, and since it allows me to do grain-free baking that tastes like the real thing, I’m a huge fan! I always use Otto’s Cassava Flour (it’s made from the whole root rather than being an isolated starch), and some of my favorite recipes using this flour include my Caramel-Bacon Double Chocolate Brownies, Dinner Rolls and Paleo Flour Tortillas (AIP-Friendly!).

It’s important to note that cassava must be prepared using traditional cooking methods to remove a potentially harmful antinutrient. It contains cyanogenic glycosides, an antinutrient that releases cyanide into the body if the food is not properly prepared (other common sources of cyanogenic glycosides are almonds, bamboo, cashews and stone fruits like peaches and apricots, so don’t worry about it sounding too weird).  The sweet cassava that is available as an imported vegetable in Western countries has only about a tenth of the cyanogenic glycosides of the bitter cassava grown in South America and Africa, which makes it pretty low on the cyanide scale to start with. The boiling process in most recipes removes this antinutrient, and cassava flour is free of cyanide as well! 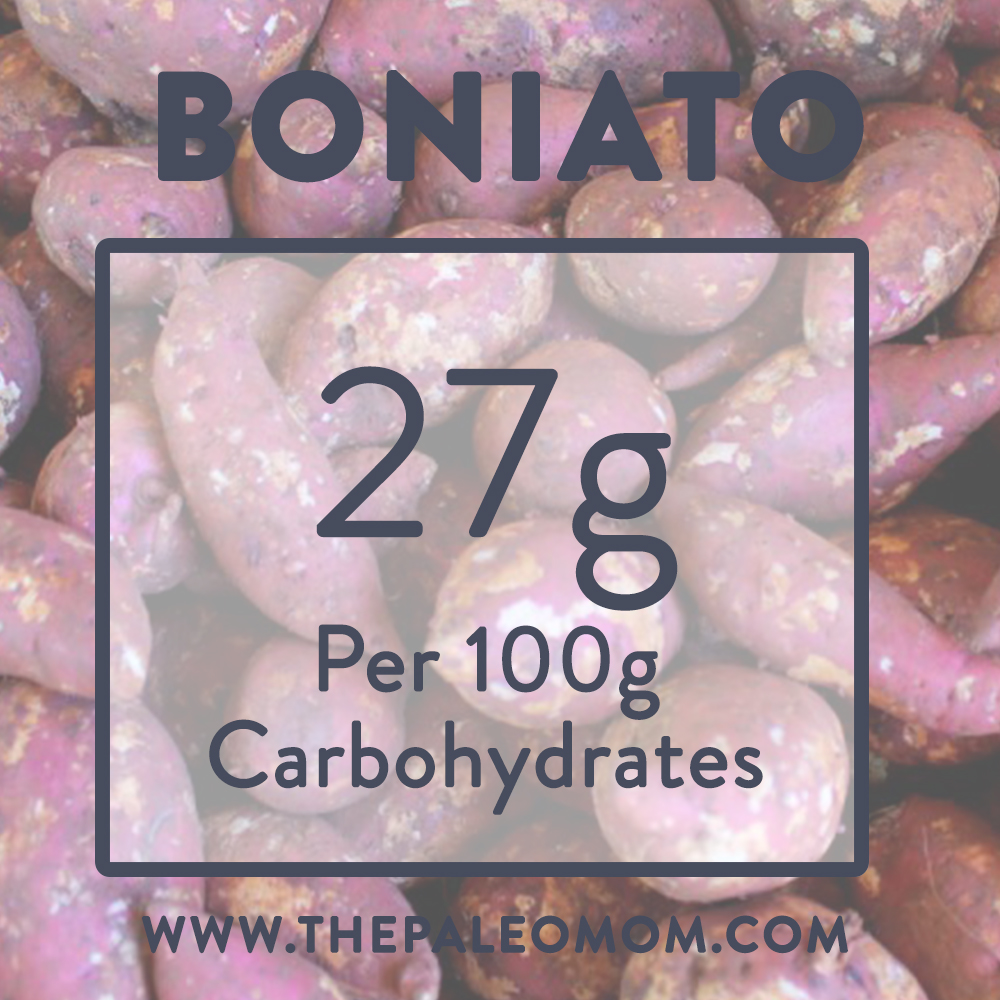 If you’re lucky enough to track down a boniato, I recommend you try my friend Russ Crandal’s recipe for Mashed Boniato. It’s simple, decadent and totally creamy and delicious! In my latest book, The Healing Kitchen, my co-author Alaena Haber and I use white sweet potatoes to replicate the texture of white potatoes in many recipes. Boniato would work perfectly well in these recipes!  I’ve also used them to make Paleo French Fries and they work really well!

In terms of carbohydrates, boniato has about 27g/100g. Information on the micronutrients in boniato is somewhat scarce, but in general sweet potatoes tend to contain plenty of vitamins and minerals like Vitamin A, Vitamin C, Manganese, Copper, and even Vitamin B6! Plus, as with all “weird” root vegetables, you’re getting lots of fiber and phytochemicals—because you’re eating plants! Woot! 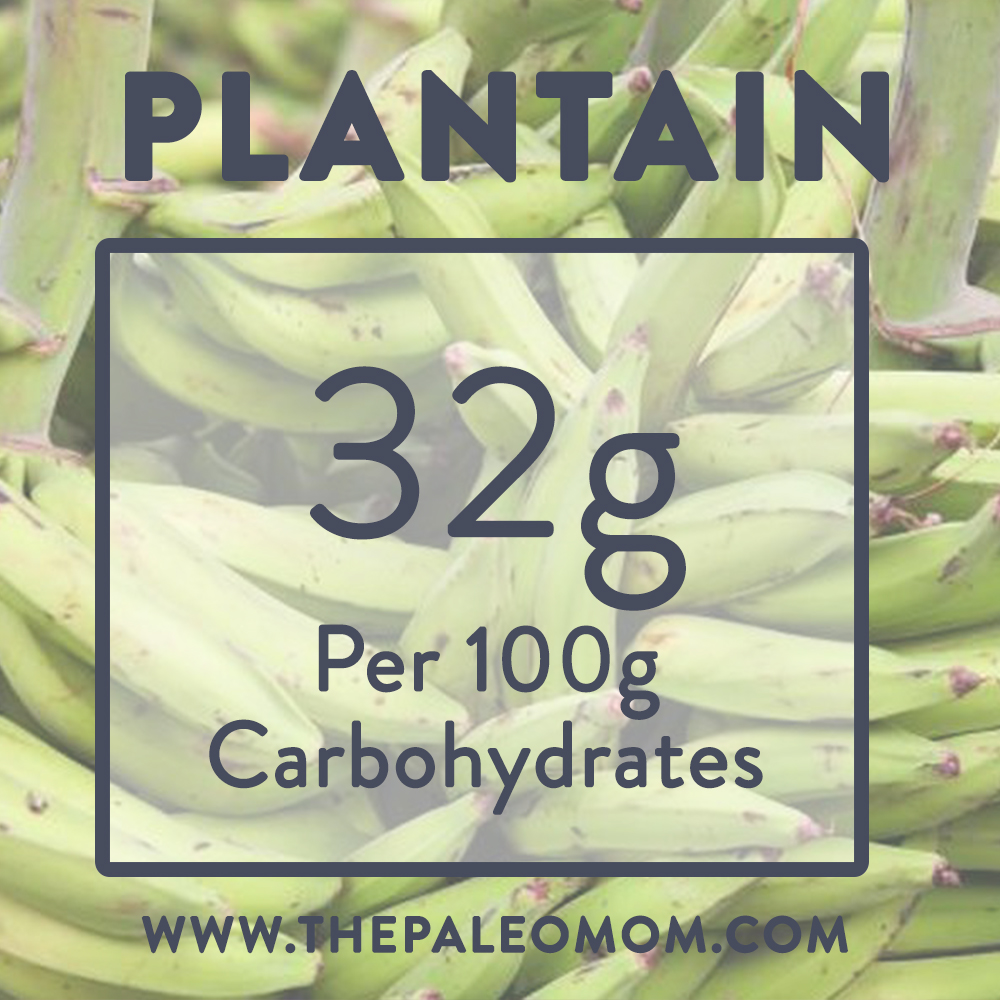 Along with Cassava, Plantain is probably the starchy vegetable I eat most. And yes, you’re totally right: plantains aren’t actually root vegetables, but fruit! They most closely resemble, and grow in much the same manner as, their cousin the banana!  I’m including them in this list because, in terms of culinary delights, they behave like a root veggie thanks to their starch content!

They share the same genus, Musa, and are a hybrid that was created in part to have a starchy, banana-like variety that was less sweet than an actual banana. In comparison, the plantain is almost always eaten cooked, and they are usually large, more angular, and, as I mentioned, contain much more starch in comparison to sugar (especially when used green, which is my preference!). Interestingly, some native cultivars of plantain do not have a different name for plantains and bananas!

I’ve done tons of cooking with plantains, and have used them in just about every recipe imaginable! The way I probably make them most frequently is Epic Duck Fat Tostones, which are a great starchy side for any meal. Puerto Rican-Inspired Green Plantain Mash (Mofongo) is also a great and versatile side dish similar to mashed potatoes! I’ve also used plantains in baking, like in my Paleo Pancakes, Paleo Waffles and Plantain Crackers (Nut-free, Egg-free) and even desserts like Spinach Brownies.  Finally, for a one-pot meal that packs in the plantains, I love my Puerto Rican Plantain Lasagna (Pastelon) and my Nightshade-Free Plantain Curry Lasagna

As plantains ripen, the starch is converted to sugar within the plant. This is reflected in the color of the skin: green plantains are starchier, while black or brown plantains are very ripe and very sweet. These sugars will cause the plant to cook differently, so, for example, someone trying to make tostones would be unsuccessful if they used a nearly-black and ripe plantain, as the plantains would burn upon frying. In general, starch is much more durable, because it’s really just long chains of sugars!  All that means is that it’s important to pay attention to what ripeness level a particular plantain recipe calls for.

The great thing about plantains is that they are also a good source of nutrition! 100g of plantain contains about 32 g carbs and is an excellent source of vitamins C and B6 as well as the minerals magnesium and potassium. For more information on preparing plantains, check out this video! 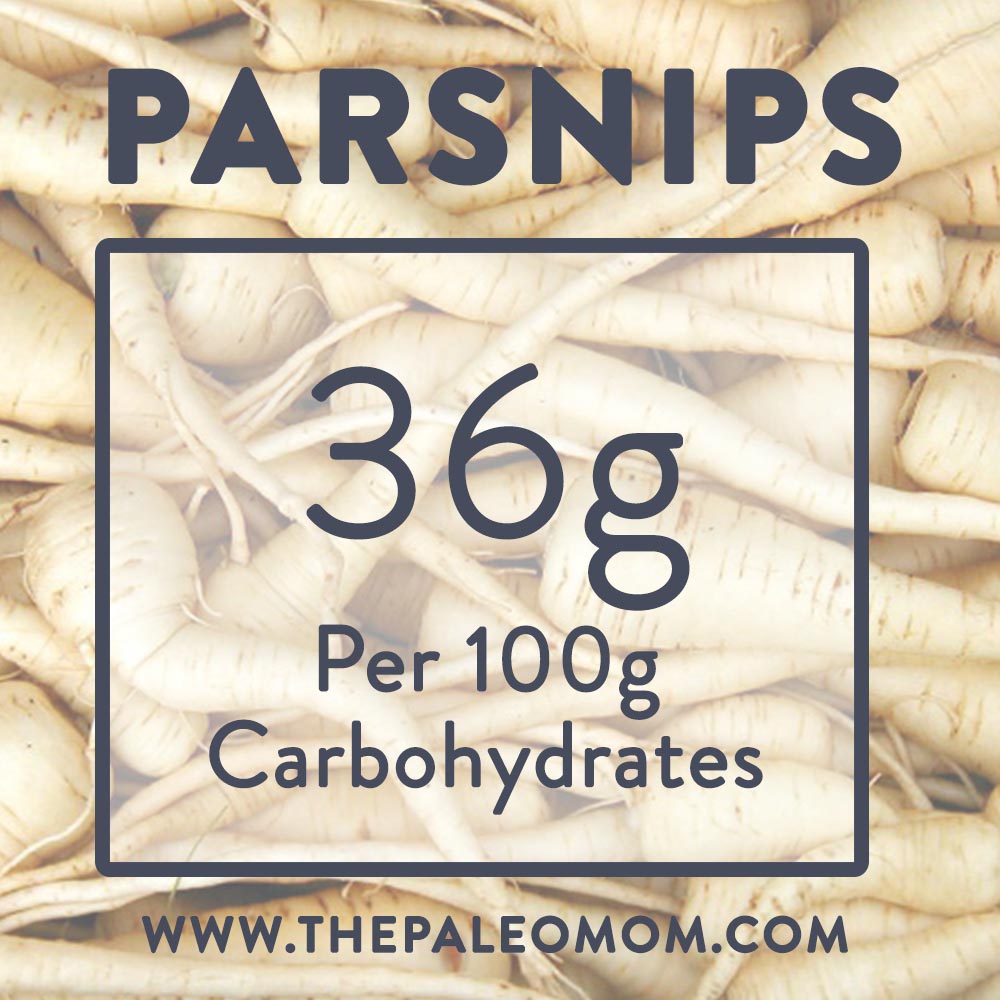 You may not have noticed parsnips hiding near the carrots at your local grocery store, but if you’ve never tried these cream-colored root veggies, you’re missing out! Parsnips are very seasonal, which makes them a fantastic addition to your holiday meals!

Parsnip is native to Eurasia, where it has been used as a vegetable since antiquity and first cultivated by the Romans. Parsnips are an unusual vegetable in that they become sweeter after the first frost; in fact, these root vegetables resemble carrots in almost every way except for color and flavor (they’re sweeter and starchier in general). Most commonly, parsnips are cooked before eating, but they can also be consumed raw.

I like including parsnips as a great alternative starchy carb! Some of my favorite recipes that use parsnips include my Beef and Mushroom Parsnip Risotto (AIP-friendly), AIP-friendly Paleo French Fries, and Carrot-Parsnip Muffins.

In addition to being delicious, parsnips are a great source of nutrition! They have good amounts of vitamins C, E, K1, B5, and B9; as well as the minerals manganese and phosphorus. Otherwise, 100g of parsnip provides small to trace amounts of all of the other essential vitamins and minerals. 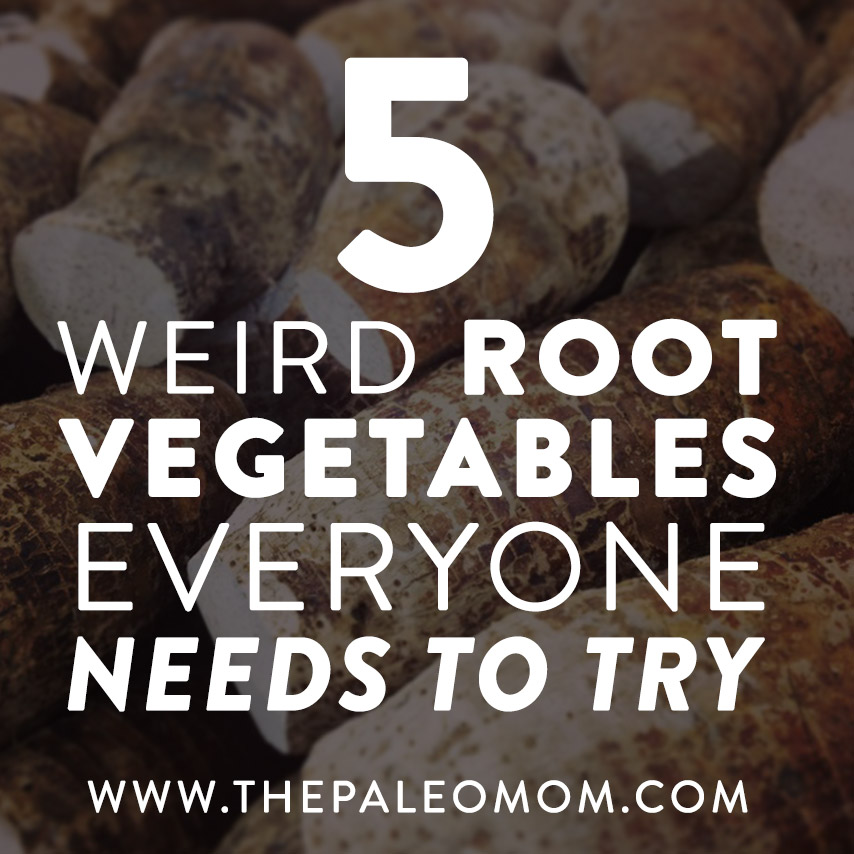 When looking for parsnips, your best bet for flavor and nutrition is to get them in season (late fall into winter).

Once you give alternative starchy carbs a shot, you’ll see there’s a whole world of recipes to try!  Try looking for these fun roots at your local grocery store, natural foods stores and ethnic grocery stores!