While many foods are clearly health-promoting or clearly harmful (when we look at the full scope of the scientific evidence), some are more ambiguous in terms of their effects on human health. Whether foods such as high-quality dairy (see The Great Dairy Debate and Goat Milk: The Benefits of A2 Dairy), legumes (see 3 Myths About Legumes — Busted! and The Green Bean Controversy and Pea-Gate), and natural sweeteners (see Natural Sugars and their Place in Paleo) are damaging, neutral, or beneficial is far from case-closed and depends largely on individual tolerance and the overall context of our health. 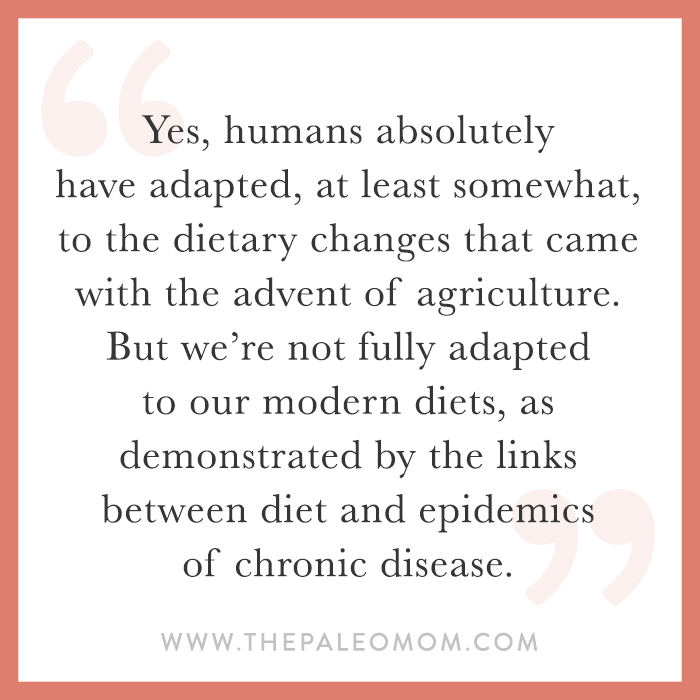 Yes, humans absolutely have adapted, at least somewhat, to the dietary changes that came with the advent of agriculture. But we’re not fully adapted to our modern diets, as demonstrated by the links between diet and epidemics of chronic disease.

Which factors affect how our bodies react to specific foods? Major inputs to our health in general, including the nutrient density of our diet (see The Importance of Nutrient Density), sleep quantity and quality (see Sleep and Disease Risk: Scarier than Zombies! and Sleep Requirements and Debt: How do you know how much sleep you need?), stress (see How Stress Undermines Health), and physical activity (see The Benefits of Gentle Movement and The Importance of Exercise)—can affect how our bodies react to compounds in foods. A lot more is unknown than known in terms of specific mechanisms, but it’s safe to generalize that our bodies are more tolerant of suboptimal foods when we’re well rested, our stress levels are low, we live an active lifestyle, we have healthy gut microbiota (see What Is the Gut Microbiome? And Why Should We Care About It?), and we aren’t deficient in any nutrients. Because these inputs can fluctuate even when we’re trying to keep everything dialed in—stress levels may go up with an approaching deadline, or gut microbiota may be impacted by a course of antibiotics, for example—it can sometimes feel like identifying which foods work (or don’t work) for us is a moving target. Layered underneath this variability are the more stable effects of genetics.

Genetic variation certainly accounts for some differences between individuals when it comes to which foods our bodies can tolerate. An oft-cited rationale for the Paleo diet is that the mere 10,000-ish years that have elapsed since the agricultural revolution is an insufficient amount of time for genetic adaptation to consuming grains, legumes, and dairy as dietary staples compared to the 4 million years of human evolution that preceded this massive dietary shift from foods that were hunted and gathered to foods that could be grown and harvested. However, this rationale doesn’t hold up under scientific scrutiny. 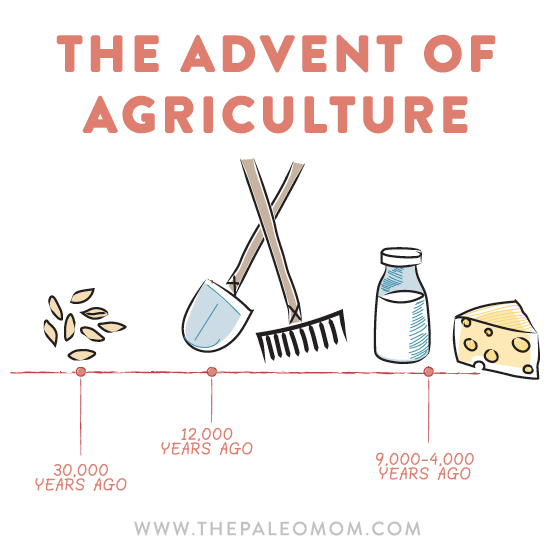 While the human body has not adapted enough for us to thrive on the modern Western diet (if it had, we wouldn’t be seeing chronic illness rising to epidemic proportions with such clear correlations and mechanistic links to various dietary factors), some genetic adaptations are apparent. A recent study sequenced the genomes of 230 ancient humans living in West Eurasia between 6500 BC, when farming first arrived in that area of the world, and 300 BC, analyzing for evidence of genetic adaptation driven by natural selection to the new environments, pathogens, diets, and social organizations that farming wrought. The researchers found twelve areas of the genome where substantial genetic adaptations were apparent. While the function of some of these genes remains unknown, some relate to physical characteristics like height, skin pigmentation, and eye color. More relevant to this discussion, others relate to diet, metabolism, and immune function.

The most evident genetic adaptation is lactase persistence, spurred by the advent of animal husbandry, which allowed non-human milk to become an accessible food. Before this adaptation, humans produced only the enzyme lactase, which digests the milk sugar lactose, until weaning age. However, starting around 4,000 years ago, a substantial proportion of Europeans continued to produce lactase into adulthood. Now, approximately 95 percent of people of northern European descent have lactase persistence, but only 10 percent of those of Asian or African descent continue to produce lactase into adulthood. Because this genetic adaptation has been driven by dairy consumption, variations in lactase persistence in different cultures is attributable both to how big a role dairy played in the traditional diets of these cultures and to how long ago dairy cows or goats were domesticated in these regions. Lactase persistence is an excellent example of genetic adaptation to new foods over a very short time, evolutionarily speaking.

Other genetic adaptations to the dietary shift that came with agriculture are also apparent, although the implications are not as well understood. Two adaptations relate to fatty acid metabolism, one affecting plasma lipid and fatty acid concentration and the other causing decreased serum triglyceride levels (see The Paleo Diet for Cardiovascular Disease). Another adaptation relates to circulating vitamin D levels, likely relating to a variation in dietary or environmental sources of vitamin D (see Vitamin D). 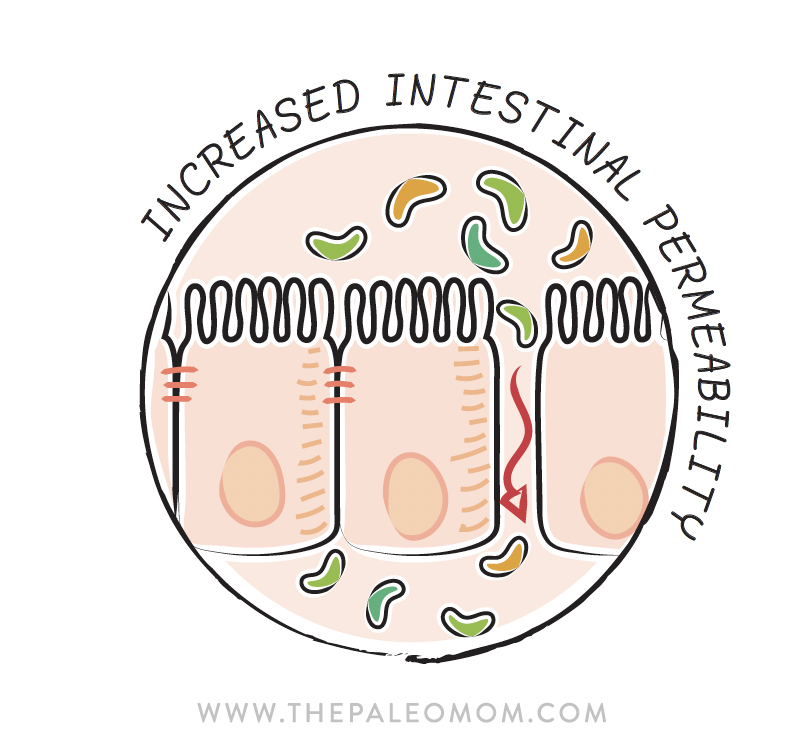 Another relevant adaptation to agriculture is evident in the gene encoding the major histocompatibility complex, the HLA gene. As discussed in How Gluten (and other Prolamins) Damage the Gut, even non-celiacs with either the HLA-DQ2 or the HLA-DQ8 gene variant secrete excess zonulin in response to gluten consumption, unraveling the tight junctions between enterocytes and causing increased intestinal permeability (see also What Is A Leaky Gut? (And How Can It Cause So Many Health Issues?)). Well, these gene variants, associated with increased risk for ulcerative colitis, celiac disease, and irritable bowel syndrome, are believed to have hitchhiked onto an adaptation to protect against ergothioneine deficiency in agricultural diets. Ergothioneine is a naturally occurring antioxidant amino acid that our bodies can’t produce, so we must get it from our diets, the highest food sources being edible fungi and organ meat (yet another reason Why Everyone Should Be Eating Organ Meat). The full role of ergothioneine in human health remains unknown.

Aside: Some common gene variants of HLA are believed to come from Neanderthals breeding with Homo sapiens around 30,000 years ago. These Neanderthal variants are believed to have given modern humans an immune advantage in fighting off infections. Cool, right?

Other Factors Impacting Our Responses to Various Foods 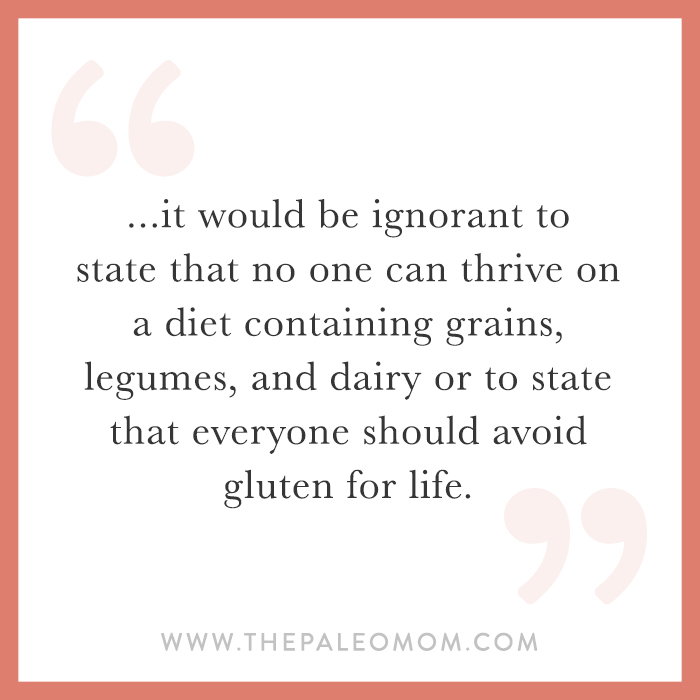 Yes, we have adapted, at least somewhat, to the dramatic dietary shift caused by the advent of agriculture. And in the face of this evidence, it would be ignorant to state that no one can thrive on a diet containing grains, legumes, and dairy or to state that everyone should avoid gluten for life. Of course, no gluten-containing or wheat-based food is a nutritional powerhouse (see Gluten-Free Diets Can Be Healthy for Kids), but we see a spectrum in terms of the effects of consuming the inflammatory prolamins and agglutinins present in wheat (see also How Gluten (and other Prolamins) Damage the Gut and Are all lectins bad? (and what are lectins, anyway?)). Individual sensitivity ranges from the severe and life-threatening damage caused in celiac disease sufferers, to the more subtle effects on intestinal permeability seen in non-celiacs with HLA-DQ2 or HLA-DQ8 gene variants, to examples of Blue Zone cultures in which homemade traditionally prepared whole-wheat bread is a dietary staple (see also Genes to Know About: Celiac Genes and Gluten Cross-Reactivity: How your body can still think you’re eating gluten even after giving it up.). This wide range of responses is partly attributable to genetics, but other aspects of our modern diet and lifestyles are also culprits. In fact, whether we are genetically adapted to eating wheat or dairy may be moot in the context of nutrient deficiency, poor gut health, high stress, and insufficient sleep—yeah, how most of us Westerners live our day-to-day lives.

Nutrient deficiency is definitely a contributor to how our bodies respond to specific foods. Not only are nutrient deficiencies themselves strongly linked to chronic diseases because the immune system requires so many nutrients to function well (see The Importance of Nutrient Density and 3 Ways to Up Your Nutrient Game), but they are specifically linked to sensitivities and intolerances to various foods. Salicylate sensitivity, for example, may be purely a consequence of omega-3 fatty acid and zinc deficiency (see What is Salicylate Sensitivity/Intolerance?). Zinc deficiency exaggerates the increase in activity of tissue transglutaminase in response to gluten consumption, thereby modulating the immune response to gluten as well as the likelihood of forming antibodies against tissue transglutaminase (see Why Grains Are Bad, Part 1, Lectins and the Gut).

Gut health is also a determinant of how the body responds to foods. This is, of course, most apparent when things go wrong. For example, histamine intolerance (see Histamine Intolerance), arises when there is a greater proportion of gut bacteria that convert the amino acid histadine into histamine and/or when the gut enterocytes do not produce sufficient deamine oxidase (DAO) to detoxify histamine (which may be due to poor enterocyte health, genetic mutations, or consumption of foods or drugs such as alcohol or antibiotics that interfere with DAO activity). When the gut barrier is leaky, the immune system is exposed to a greater amount of intact or only partially digested food proteins, increasing the likelihood of developing an allergic reaction (where IgE antibodies are formed against a food protein) or intolerance (where IgG, IgA, IgM, or IgD antibodies are formed against a food protein). And when our gut microbial community is out of balance, we can experience a variety of symptoms from eating specific foods, as in the painful bloating and other gastrointestinal symptoms that can occur in people with small intestinal bacterial overgrowth (SIBO; see Modifying Paleo for Small Intestinal Bacterial Overgrowth (SIBO)) after they consume foods rich in fermentable fibers and starches.

Both high stress and inadequate sleep increase insulin resistance (see 3 Ways to Regulate Insulin that Have Nothing to Do With Food), so the body is less able to handle spikes in blood glucose after eating a carbohydrate-rich meal or snack. Both high stress and inadequate sleep have direct detrimental effects on gut health and immune health, potentially magnifying immune reactions to foods or compounding issues like SIBO.

The Paleo framework is not about making unequivocal rules about which foods shall be included in or excluded from your diet. Instead, the Paleo framework respects our wide-ranging individual differences and remains flexible to further refinement as new scientific studies increase our understanding of the relationship between human health, diet, lifestyle, and our environment. Thus it is essential not just to provide you with a detailed education on the various health-promoting versus health-undermining compounds in different foods, but also to give you the tools to identify which foods work for you.  My best resource for an in-depth discussion on how foods impact our health is Paleo Principles.