You are here: Home / Autoimmunity / Gluten-Free Diets Can Be Healthy for Kids 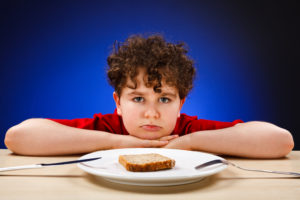 When actress Gwyneth Paltrow recently admitted that her family does not eat grains, the media got all riled up that she was depriving her children’s brains of vital energy and nutrition (see here)!  Critics of gluten-free diets are all over the media warning people that gluten-free diets are less nutritious and that there is no reason to avoid gluten unless you have a diagnosed allergy or celiac disease (like this NY Times article).  The concept of gluten-free diets being unhealthy is further supported by scientific journal articles like this one (albeit funded by the Grain Foods Foundation) which espouse on the claimed health benefits of gluten-containing foods.

In contrast, more and more people are discovering that they are sensitive to gluten, that avoiding gluten helps them lose weight, or that they just plain old feel healthier without it.  More and more parents are discovering that gluten-free (or gluten-free casein-free, or grain-free, or Paleo/primal) diets address a variety of nebulous health issues in their kids, such as sleep disturbances, digestive symptoms, and behavioral problems.  Admittedly, I am one of these people.  My oldest daughter was on miralax supplements for chronic constipation for 2 years before we went gluten-free.  Within a month of saying adios to gluten, she was completely off miralax and hasn’t had issues since.  Oh yeah, and she finally started sleeping through the night.  My family didn’t even give up gluten for her.  It was my youngest daughter’s obstructive sleep apnea due to inflammation in her larynx that was not responding to high doses of proton pump inhibitors (coupled with my own newfound enthusiasm for the Paleo diet) that drove us to make the switch.  It made a huge difference in my youngest daughter too (who we since have figured out is also sensitive to dairy, tomatoes and strawberries).  In fact, it’s the only hard and fast food rule in our house:  no gluten.  Ever.

Are gluten-free diets just the latest fad?  Why is “going gluten-free” becoming so popular?  I believe that it’s because so many of us are finding out that we’re healthier without gluten, that our kids are healthier without gluten, that our babies fuss less when their nursing mothers avoid gluten.  We tell our friends.  They try gluten-free.  They find out that they’re better off too.  Books like Wheat Belly by Dr. William Davis help explain why and encourage more people to take the plunge.

Gluten-sensitivity is becoming better understood as its own health condition, separate from celiac disease.  However, one of the major limitations, both for scientists trying to define gluten-sensitivity and for doctors trying to diagnose it, is that currently available diagnostic tests are limited in what they can tell you about how your body reacts (or doesn’t) to gluten.  A biopsy and/or blood test can tell you whether or not you have celiac disease (provided you’ve been eating gluten for the last month).  Blood tests can tell you if you have an allergy to wheat or if your body produces IgG or IgA antibodies against proteins in wheat (which is testing for a food intolerance).  Many healthcare professionals will run these tests and, if they all come back negative, will advise that there is no good reason for you or your child to give up gluten.  However, there are many ways that you can be sensitive to gluten or other proteins in wheat for which there just aren’t methods to test for.  Studies show that even in the absence of diagnosed gluten-sensitivity, removing gluten from the diet can be beneficial.  For example, patients with Irritable Bowel Syndrome find substantial improvements with gluten-free diets.

The only way to know for sure whether you or your child are gluten-sensitive is to cut it out for a few weeks and see if you or they feel better.  Then, try adding it back in and see if you feel worse.  And while your doctor may be skeptical, most healthcare professionals agree that if you eliminate gluten from your diet and feel better, then that amounts to a positive diagnosis for gluten sensitivity.

But, what about healthy people?  What about healthy kids?  Kids are growing and their brains are developing.  Is it safe to put a kid on a gluten-free diet if they don’t have a health problem that is improved by going gluten-free?  If one member of a family needs to be gluten-free, is it safe for the entire family to eat the same way?  Is gluten-free a nutritious diet?  Will depriving your child of grains really deprive their developing brains of essential nutrients?

Certainly, when you compare the nutrition facts of a commercial bread with a commercial gluten-free bread, there are some differences.  And there is also a great deal of variability in the nutrient content of different gluten-free breads, partly due to the fact that only some companies add vitamins (analogous to the iron and B-vitamins added to wheat flour to create “enriched wheat flour”) whereas others do not, and partly due to the fact that different gluten-free flours inherently offer different nutrient value. 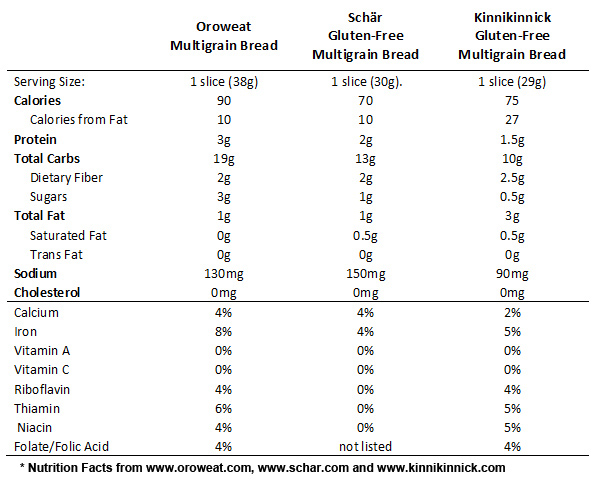 The most common arguments against gluten-free baked goods is that they contain less fiber, less iron and less B-vitamins than their wheat-based counterparts.  This argument is supported by studies such as this one that show that the most common nutrient deficiencies in celiac disease patients following long-term gluten-free diets are fiber and the B-vitamins folate, niacin, and B12.  As you can see from the nutrition facts comparison of three different commercially-available multigrain breads, this is a valid criticism of some gluten-free products; but certainly not all.  In fact, some gluten-free products (like the Kinnikinnick multigrain bread in the example above) are superior in terms of fiber and B-vitamins to their wheat-based counterparts.

But, do people following gluten-free diets replace one for one every gluten-containing food with a commercially-produced gluten-free version?  I would argue that the majority of people following gluten-free diets tend to replace at least a portion of the bread, pasta, muffins and cookies that they ate before going gluten-free with other foods, often much more nutrient-dense foods such as vegetables, fruits, meat, seafood, eggs, nuts and dairy products.  The scientific evidence backs this up.  A recent study evaluating the nutrient intake of children with celiac disease compared to their healthy non-gluten-sensitive counterparts found that children with celiac disease actually consumed more calcium, vitamin B6, vitamin B12 and substantially more zinc than those children who included gluten in their diets.  And, while the children with celiac disease did consume substantially less dietary vitamin D, this is the vitamin that our bodies make in response to sunlight.  An additional recent study evaluated an even wider range of vitamins and minerals (this time in Australian adult celiac disease patients and compared to the general public) and found that patients with celiac disease following gluten-free diets actually consumed more calcium, magnesium, phosphate, zinc, folate, and vitamin C while the other vitamins and minerals as well as fiber were equivalent.

So, does that mean gluten-free is actually healthier?  The people included in these studies did consume more of some key nutrients, but they were also still deficient in several nutrients compared to the recommended daily allowance (RDA).  Actually, a large percentage of people are deficient in many key nutrients, regardless of whether gluten is present in their diets.  This study, for example, shows that 39.1% of people aged 2 years and older are routinely not consuming the RDA of iron, 33.2% are not meeting the RDA of folate, 25.9% of people are not meeting the RDA of niacin, and 17.2% are not meeting the RDA of vitamin B12.  So, if patients with celiac disease are deficient in these nutrients, is it the fact that they are gluten-free or the fact that our grocery stores are filled with highly processed foods with little redeeming nutritional features regardless of gluten content?  If you look at the wheat-based multigrain bread nutrition facts above, you’ll note that it’s not especially teeming with vitamins and minerals.

Let’s be clear.  Gluten is not a nutrient.  It is a very difficult to digest protein found in wheat, rye and barley which causes health issues for many people.  Going gluten-free does not mean that you are cutting a vital nutrient out of your diet.  And a gluten-free diet is not inherently unhealthy. But going gluten-free doesn’t automatically mean that you are eating a more nutrient-dense diet either.  It matters what you replace those wheat-based bagels and pasta with.  It’s not about what you’re not eating.  It’s about what you do eat.

Grains in general are not nutritional powerhouses (contrary to what clever marketing may tell you).  Even the healthiest whole grains can’t compete with vegetables in terms of vitamin and mineral content.  The graph below shows the relative quantities of essential vitamins and minerals (so setting vegetables to 100% and expressing the amount in nutrition in grains as a percentage of what is found in vegetables), calculated from the average of eight entirely wholegrain, unprocessed foods compared to an average of 30 commonly-found vegetables.  When compared to vegetables, calorie for calorie, vegetables contain double or more of every single vitamin (although both vegetables and grains are not high in vitamin D, with the exception of mushrooms).  When compared to vegetables, calorie for calorie, vegetables are higher in most essential minerals (they are about equal to vegetables in sodium and manganese and grains do contain substantially more selenium, although selenium is even more richly found in nuts, seafood, meat, poultry and eggs).  Oh, and vegetables and fruit are outstanding sources of fiber, about equal to grains.  So, if a vegetable side dish or even a piece of fruit replaces a dinner roll on with your meal, you get equal amount of fiber and far more vitamins and minerals. 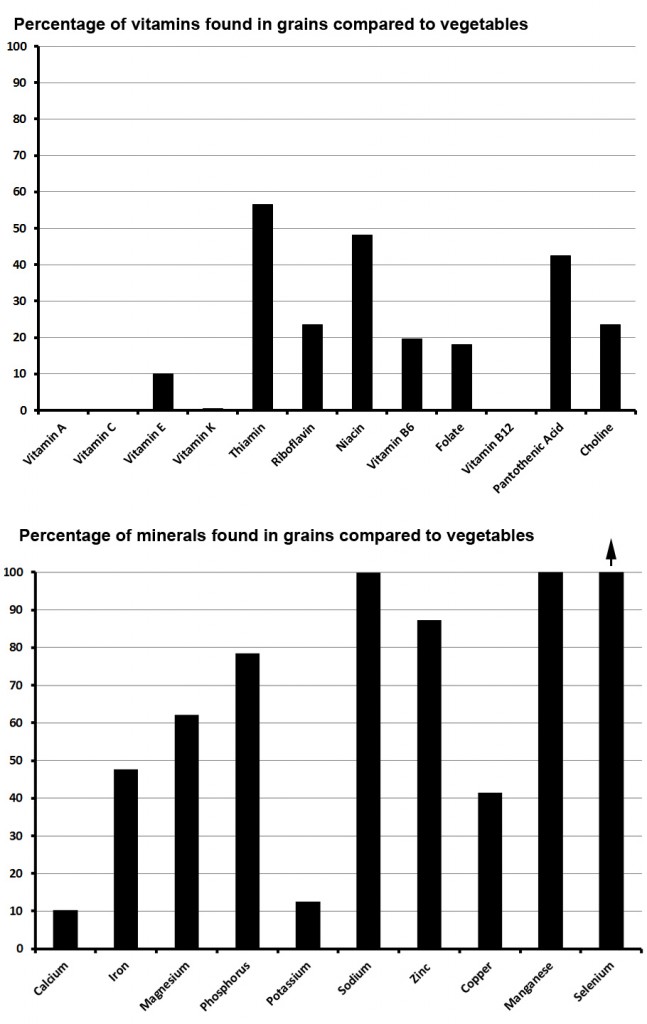 So, what about Gweneth Paltrow?  Is she really depriving her children’s brains of vital nutrition?  The two main criticisms of her are that her children may not get enough fiber and that her children’s brains need carbohydrates to function.  Clearly, vegetables and fruit provide plenty of fiber as well as carbohydrates.  Plus, vegetables and fruit provide far more of the vitamins and minerals that her children need to be healthy compared to grains.  And what about that scientific journal article espousing the benefits of wheat-based foods?  Their chief argument is that grains contain fiber and that high fiber diets are associated with decreased risk of chronic diseases such as cardiovascular disease, obesity and type 2 diabetes.  Absolutely, eating fiber is important, but vegetables and fruit provide plenty of it.  Even many commercially-available gluten-free products contain as much if not more fiber than their wheat-based counterparts.