You are here: Home / Marketing / Book Review: The Paleo Manifesto by John Durant 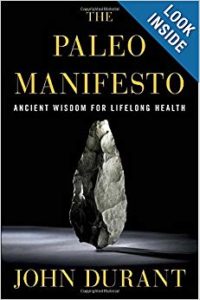 I opened The Paleo Manifesto not realizing that I had seen author John Durant present his “caveman” lifestyle on The Colbert Report a few years ago. He opens the interview with the statement that we, like zoo animals, are happiest and healthiest when we are in our natural habitat. That statement is the foundation of this book. Our modern concrete jungles, processed diets, and sedentary lifestyles are not ideal for a species that spent hundreds of thousands of years on the plains under the sun, but, like good zoo keepers, we can do a lot to make our modern lives more closely resemble the environment we are best adapted to.

Although The Paleo Manifesto is riddled with suggestions on how to “be Paleo”, John focuses less on how and more on why. He explains a Paleolithic lifestyle through anecdotes about his experience as a modern-day “caveman”. He talks about hunting, barefoot running, swimming in extreme temperatures, eating dirt, fasting, the circadian rhythm, sun exposure, and sleep habits. He presents rational, evidence-based arguments for why he chose to live that way, but doesn’t dissect scientific studies for us. He simply tells us a story. Our story.

Following us on our journey from our primate ancestors to our modern selves, John traces the evolutionary and cultural developments that changed how we lived, ate, moved, and even procreated. He dispels common misconceptions about how our ancestors lived and what their health was like, but he doesn’t idealize them, either. He admits that the Agricultural and Industrial Revolutions, which gave us grains, processed foods, and increasingly less-active lifestyles, came with a lot of advantages. (Here’s one: Cannibalism decreased, possibly because humans were no longer an ideal food source!) He observes that things get worse before they get better when you take an animal out of its natural habitat, and things simply haven’t gotten better for us yet. Most of us are still unhealthy and unhappy like those zoo animals that won’t procreate. Adopting a Paleo lifestyle is an attempt to revitalize us, and John’s anecdotes are excellent motivation to get out there and live a little.

The book does contain some potentially controversial material on religion (it’s one of those big cultural developments that forever changed the way we lived) and vegetarianism (how it fails to be “part of the solution”), but John raises the subjects tactfully. It’s clear that he respects anyone trying to live a healthier, more ethical life. He makes strong arguments for why it falls to the meat-eaters to be the advocates for animal welfare. Even back when I was a vegan, I don’t think I would have been able to argue with any of the points he raises. (I did, after all, wind up adopting Paleo.)

It’s an excellent book, and I’m not just saying that because I’m a history and health buff. The Paleo Manifesto is the book for anyone that wants to learn about our hunter-gatherer roots and why emulating the lifestyle of our ancestors will result in better health. It’s the book for anyone that isn’t convinced by anecdotal evidence but doesn’t want to dive head-first into medical journals. John is a fascinating individual with a great narrative voice, and even if you get nothing else out of it, you will get a great story.

Are all lectins bad? (and what are lectins, anyway?)
Next Post: Call to Action! Save Dr. Terry Wahls TEDx-IowaCity Talk!