You are here: Home / Nutrition / The Health Benefits of Stone Fruits 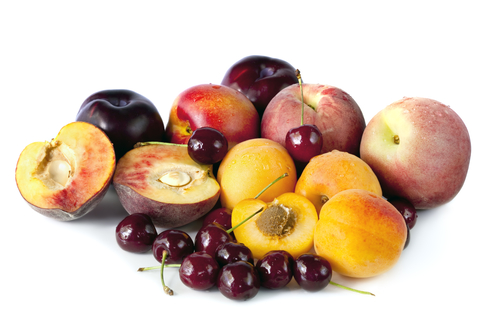 Amid all the talk of berries as superfoods, bananas as gut-health boosters, and citrus as vitamin C powerhouses, one fruit group tends to get sadly little attention: stone fruits! Stone fruits (also known as drupes) are fruits containing a single pit (or stone) surrounded by edible flesh. Their long list includes:

Stone fruits grow around the world, and all have unique origins. For example, a genetic study showed that apricots were independently domesticated from their wild counterparts three different times (once in China and twice in Central Asia); in China alone, they’ve been grown since at least 1000 BC, and were traditionally preserved with salting and smoking. Meanwhile, peaches and nectarines are believed to have originated in China over 2000 years ago. Cherries were domesticated earlier than recorded history, and were named after the Turkish town of Cerasus (Turkey still produces more cherries than any other region in the world). And, plums were one of the first fruits domesticated by humans. 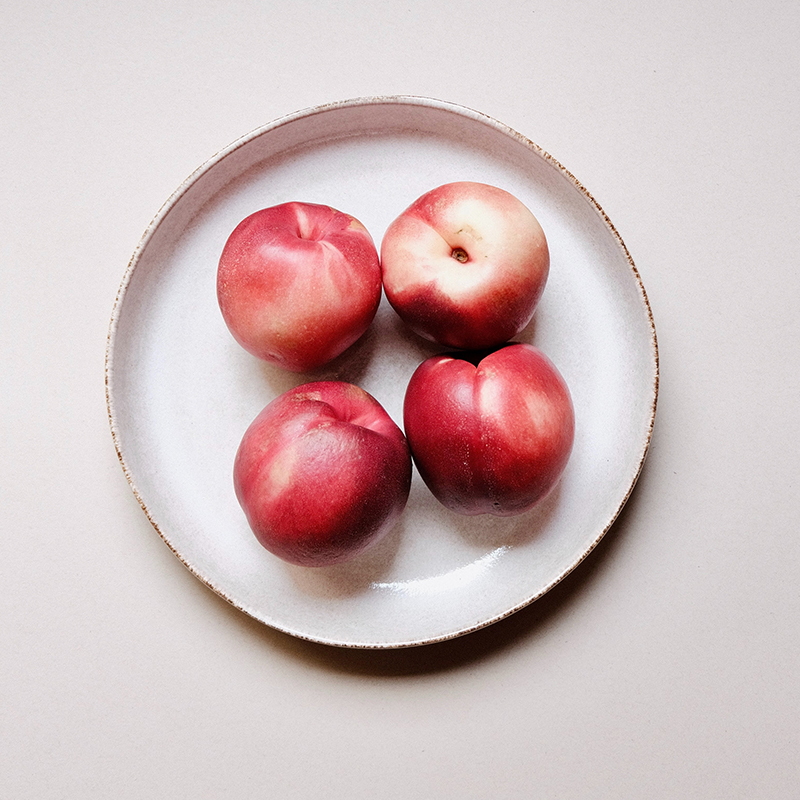 Like all sweet fruits, stone fruits are moderate in carbohydrates (mostly fructose and glucose), low in fat and protein, and contain a good amount of fiber (see also Fruit is a Good Source of Carbs, The Case for More Carbs: Insulin’s NonMetabolic Roles in the Human Body, How Many Carbs Should We Eat? and What Is Fiber and Why Is it Good?).

Although they all have differing nutritional profiles, they generally tend to have significant vitamin C, carotenoids (especially orange or yellow fruits), and smaller amounts of potassium and other micronutrients. They also contain malic acid, which is the main organic acid responsible for these fruits’ sourness (tart cherries are particularly rich in it!); see The Amazing World of Plant Phytochemicals. In addition, stone fruits are also great sources of phytonutrients, especially polyphenols (see Polyphenols: Magic Bullet or Health Hype?). For example, apricots are one of the richest sources of catechins out of any fruit, while plums and cherries are among the best sources of hydroxycinnamic acids. Plums are also high in anthocyanins (especially cyanidins and peonidins), procyanidins, catechin, epicatchein, and quercetin derivatives. Peaches and nectarines contain chlorogenic acid, catechins, epicatechins, gallic acid, and ellagic acid; white peaches are actually higher in total polyphenols than yellow nectarines. Cherries contain catechin, epicatechin, quercetin, kaempferol, cyanidins, peonidins, hyroxycinnamic acids (including caffeic acid, chlorogenic acid, coumaric acid), and pelargonidins; sour cherries have higher total levels of phenolics, mostly due to having greater concentrations of hydroxycinnamic acids and anthocyanins, but sweet cherries have plenty as well. Plums and cherries actually contain higher concentrations of polyphenols than many types of berries, which are famous for these phytonutrients! 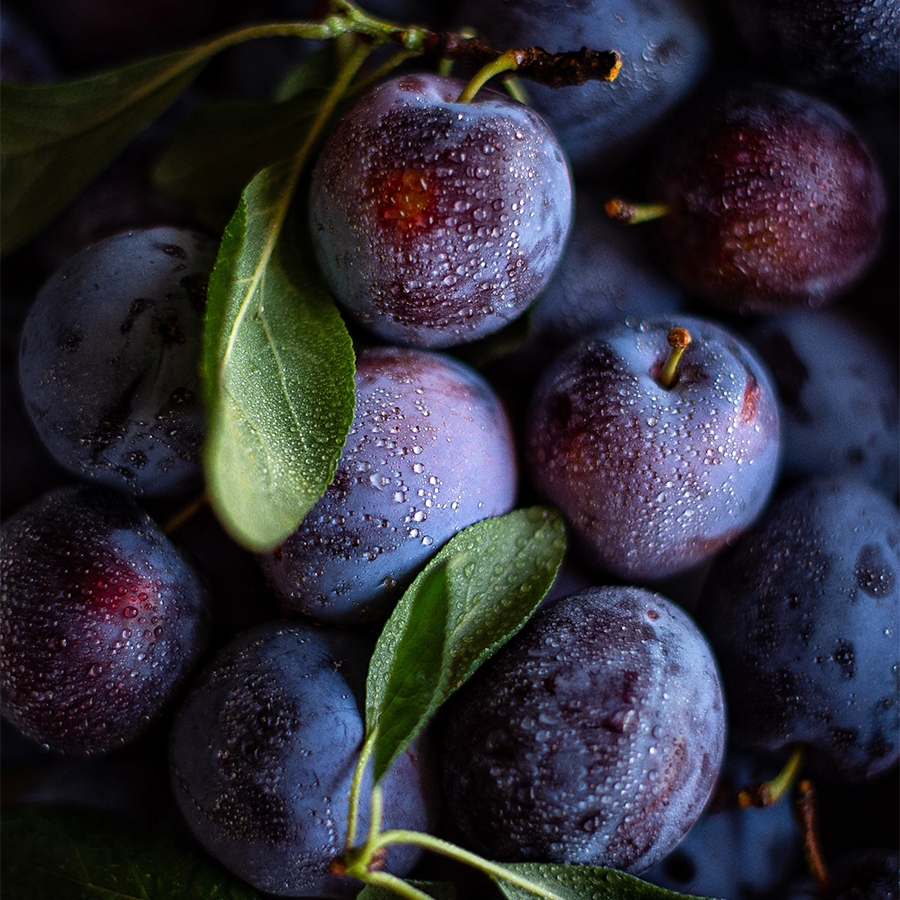 Stone fruits also offer an array of benefits for our health.

A systematic review found that dried plums are even more effective than psyllium for improving stool consistency and frequency, making them particularly helpful for constipation (in part due to the high fiber and sorbitol content of plums, as well as their natural serotonin content, which helps induce intestinal contractions). In fact, as far back as 1878, “medicated prunes” were advertised as a remedy for constipation and other gastrointestinal symptoms (particularly bloating, dyspepsia, heartburn, and flatulence). In postmenopausal women, dried plum consumption (100 grams daily for three months) increased markers of bone formation and may consequently boost skeletal health—particularly in a population susceptible to osteoporosis. This effect could be due to the numerous compounds plums contain that support skeletal health, including copper (which helps strengthen bone collagen fibrils), boron (which reduces the excretion of calcium and magnesium in the urine, and also boosts estradiol levels in post-menopausal women), and vitamin K (which supports bone mineralization). Plums have also been shown to contain compounds that act against cancer cells in vitro, including breast cancer cells. And, in animal studies, plum or plum juice consumption appears to improve working memory, learning speed, and anxiety, possibly due to their chlorogenic acid content.

Cherries have also been studied extensively for their health effects! In one study, consuming 280 grams of Bing cherries per day for 28 days resulted in significantly lower C-reactive protein and nitric oxide in the blood. Seven days of consuming juice from tart Montmorency cherries, which naturally contain melatonin, was shown to significantly increase melatonin levels in the body, increase sleep time, and enhance sleep efficiency in humans—making cherries a potential boon for disturbed sleep. Cherry polyphenols have also been shown to inhibit activity of cyclooxygenase II enzymes (COX II), which are pro-inflammatory and play a role in cell proliferation, angiogenesis, apoptosis, and carcinogenesis. In fact, anthocyanins from cherries have specifically been shown to reduce proliferation of human colon cancer cells, while tart cherry extract appears to inhibit tumor development in mouse models of colon cancer. In multiple rat studies, tart cherry consumption led to reductions in blood sugar levels, triglycerides, cholesterol, abdominal fat, and both system and local inflammation, suggesting a potential role for combatting metabolic syndrome. Additional studies have shown that in both animal models and humans, consuming tart cherry juice can minimize muscle pain following strenuous running, can reduce pain from arthritis, and can reduce symptoms of gout (due to affecting uric acid levels in the body).

Although apricots have been less heavily studied for their health effects, the research we do have is promising. Supplementing rats with dried apricot appears to have cardio-protective effects after they experience myocardial infarction-reperfusion. In addition, several studies found that in rats fed alcohol, dried apricots had liver-protective properties (including leading to lower levels of liver enzymes and inflammation markers) compared to rats fed only alcohol.

In a study of seven different fruits, peaches were found to have among the highest bile acid-binding capacities, suggesting a role for regulating cholesterol levels. Polyphenols from peaches have also been shown to inhibit the proliferation of breast cancer cells without harming healthy cells, at doses equivalent to eating two or three peaches per day for a 60 kg adult. And, some studies show that extracts of peaches and nectarines are able to inhibit LDL oxidation, potentially giving them a role in protecting against heart disease! 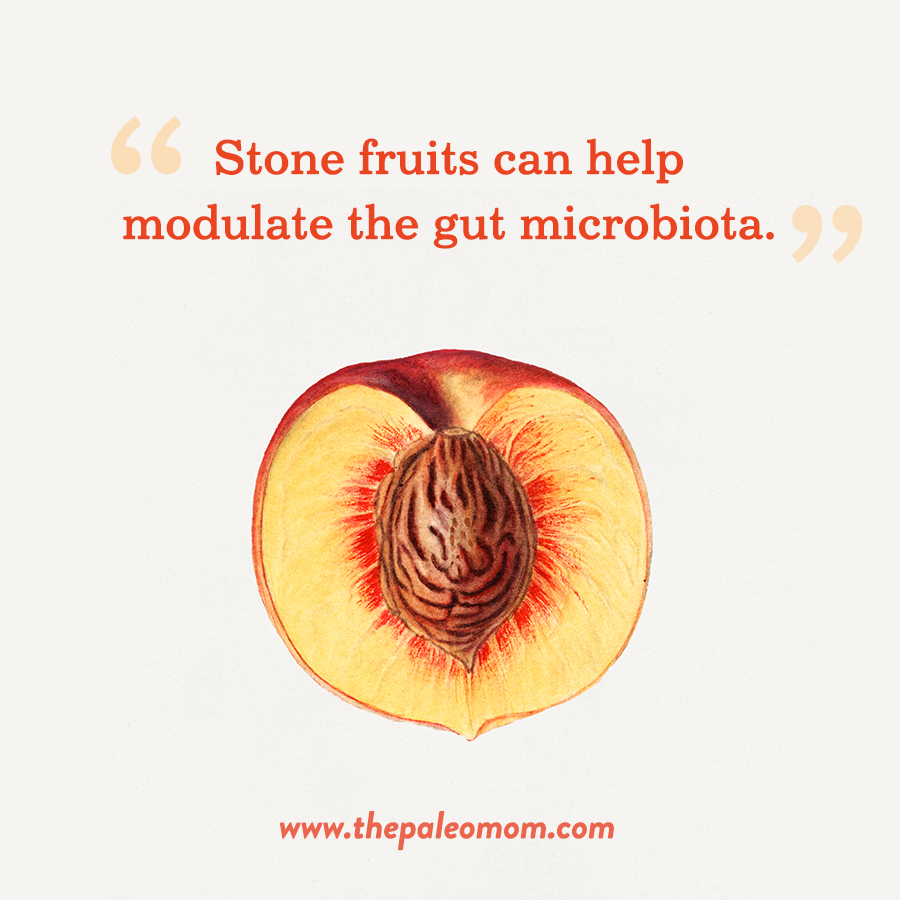 Stone Fruits Are Great for the Gut!

Stone fruits can also help modulate the gut microbiota, see What Is the Gut Microbiome? And Why Should We Care About It?.

In rats, carbohydrate-free peach and plum juice was able to enhance levels of Lactobacillus and Ruminococcaceae, along with increasing production of SCFAs. Peach peel extract was able to enhance the relative abundance of Lactobacillus, Lachnospiraceae, Prevotellaceae, Alloprevotella, Roseburia, Bacteroides, Akkermansia, and Ruminococcus in the guts of mice fed a high-fat diet. And, in rats with diet-induced metabolic syndrome, an Australian plum variety (Davidson’s plum) reduced colon levels of Clostridiaceae while increasing Turicibacter and Akkermansia muciniphila, while also reducing visceral fat, total abdominal fat, plasma triglycerides, blood pressure, and inflammation.

The sorbitol in plums may also act as a prebiotic. In vitro studies have shown that sorbitol is fermented by gut bacteria (including Lactobacillus species and Streptococcus species) into SCFAs, particularly butyrate. But see Is It Paleo? Splenda, Erythritol, Stevia and other low-calorie sweeteners

Additionally, some compounds in stone fruits have antimicrobial properties. Both dried and fresh plums have been shown to suppress the growth of pathogens responsible for food-borne illness, including Salmonella typhimurium, Escherichia coli O157:H7, Yersinia enterocolitica, Staphylococcus aureus, and Listeria monocytogenes.

Stone Fruits for the Win!

It’s important to note that although stone fruit juices (particularly cherry juice and plum juice) have demonstrated valuable health effects in studies, whole fruit still reigns supreme! Because the skin of stone fruits contains a high concentration of phytonutrients, and because the fiber in these fruits confers its own health benefits, eating the entire fruit is the way to go.

Here’s a handy-dandy list of stone fruits to choose from!