You are here: Home / Nutrition / Honey: The Sweet Truth About a Functional Food!

Honey is one of humankind’s oldest sweeteners, having been used by the ancient Greeks, Romans, Egyptians, Chinese, and Indian Ayurvedic practitioners as both medicine and an important food. There are even 8000-year-old cave paintings in Spain that depict humans foraging for honey! And, the Hadza, hunter-gatherers in Tanzania, consume up to 20% of their calories from wild honey! But, honey’s long history doesn’t make it immune to controversy and confusion. It can be tempting to look at this food’s high sugar content and assume it’s just another concentrated sweetener we should attempt to limit. Fortunately, that couldn’t be further from the truth!

What Exactly Is Honey, Anyway?

Honey is produced when honeybees drink nectar from flowering plants, regurgitate it into wax honeycomb cells back at their hive, add an enzyme from their mouths (called invertase) that breaks down the nectar’s sucrose into glucose and fructose, and then “dry out” the mixture by fanning their wings to dehydrate it. This intensive process produces the thick, syrupy food we call honey!

And, along with being surprisingly nutritious, honey stands out from other sweeteners (even “natural” sweeteners, see Natural Sugars and their Place in Paleo) in some other important ways. Let’s take a look at them!

A high-sugar food that actually benefits diabetics? It might sound surprising, but this is what the science bears out when it comes to honey! Human trials and animal studies have consistently shown that honey has a hypoglycemic effect, and can play a role in both preventing and treating diabetes. Apart from its sugar composition (the fructose in honey has a lower glycemic index than other sugars or starch), researchers have proposed that honey’s phenolic acids, flavonoids, or selective mineral ions (from selenium, copper, zinc, and vanadium) could also help explain its beneficial role in blood sugar regulation.

In one human trial, participants spent 30 days consuming either 70 g per day of sucrose (as a control) or 70 g per day of honey. In non-diabetic individuals, honey resulted in a slight reduction in body fat, a reduction in fasting blood sugar, and an overall improvement in blood lipids (lower total cholesterol, LDL, triglycerides, and C-reactive protein, and increased HDL). In diabetics, the honey reduced total cholesterol, LDL, triglycerides, and C-reactive protein! Another study of 60 healthy young adults found that compared to an intervention using 80 g of sucrose (dissolved in water) each day for six weeks, the same amount of honey resulted in lower fasting blood sugar by the end of the study.

One experiment also looked at the effects of eating a variety of high-carbohydrate foods on post-meal blood sugar and insulin among non-insulin-dependent diabetics. With glucose as a control measuring at 100%, the corresponding blood sugar increases for the carbohydrate-rich foods were 81.3% for fructose, 68.6% for lactose, 46.9% for apples, 41.4% for potatoes, 36.3% for white bread, 33.8% for white rice, 32.4% for honey, and 16.1% for carrots. In other words, honey actually caused a lower blood sugar response among diabetics than all other tested foods except carrots!

Animal models have likewise confirmed honey’s anti-diabetic properties, which become more pronounced the longer that honey-containing diets are consumed. In rats, feeding honey (as 10% of the diet) for 52 weeks significantly decreased HbA1c levels (a measure of long-term blood sugar) compared to sugar-free or sucrose-containing diets used in the same experiment. The honey diet also beneficially increased HDL levels, whereas the sugar-free and sucrose-containing diets lowered it! In diabetic rats, feeding honey (1 gram per kilogram per day) resulted in lower blood sugar. See also The Paleo Diet for Diabetes.

A well-studied feature of honey is that it can selectively target some important pathogens! In fact, the antibacterial activity of honey has been known since 1892, and in the time since then, over 60 species of bacteria have been shown to be sensitive to honey (including Shigella dysentery [a diarrheic disease], Bacillus anthracis [more commonly known as anthrax], Corynebacterium diptheriae [which causes diphtheria], Haemophilus influenzae [which causes infections like pneumonia and meningitis], Listeria monocytogenes [which causes listeria or listeriosis], Mycobacterium tuberculosis [which causes the disease tuberculosis], Streptococcus mutans [a major contributor to tooth decay], Vibrio cholera [which causes cholera], among many others!). In some cases, honey is so potently antibacterial that it can be diluted up to 56 times and still inhibit pathogen growth (such as for Staphylococcus aureus, the most common pathogen infecting wounds). A solution of 20% honey has even been found to inhibit H. pylori, a bacterium that causes stomach ulcers. And, unlike most commercial antibiotics, honey doesn’t appear to promote the development of antibiotic-resistant bacteria!

So, what gives honey these antibacterial properties? Researchers have identified a few important mechanisms. Along with having a sugar content high enough to inhibit microbial growth, honey has an osmotic effect on its environment, and is able to draw out moisture and ultimately dehydrate pathogenic bacteria. Honey also has a low pH (between 3.2 and 4.5), which is acidic enough to prevent many microorganisms from growing. And, honey contains a number of components that either kill bacteria or prevent it from reproducing—especially the hydrogen peroxide produced by glucose oxidation when honey is ripening, and non-peroxide components such as lysozyme, polyphenols, phenolic acids, flavonoids, methyl syringate, and bee peptides. Although honey’s peroxide-related antimicrobial activity is sensitive to heat and light, its non-peroxide antimicrobial activity remains present regardless of storage and processing methods, and makes some varieties of honey particularly powerful against pathogens. New Zealand Manuka honey, for example, is known for containing a naturally occurring compound called methylglyoxal, a glycoside called leptosin, and other bioactive components. In fact, Manuka honey’s unusually high antimicrobial activity is one reason you’ll find it with such a high price tag at the store!

Along with killing bad bacteria, honey can help good bacteria flourish! Science has shown us that many of honey’s health effects are due to its prebiotic properties, and are mediated by the gut microbiome. (See What Is the Gut Microbiome? And Why Should We Care About It?)

The indigestible oligosaccharides are primarily what give honey its prebiotic activity. Although prebiotic oligosaccharides and antimicrobial compounds both work independently to fight pathogens, when combined in one food like honey, these components can work synergistically to enhance the probiotic potential of that food. In Manuka honey, for example, the synergistic effects of its prebiotic and antimicrobial properties have been shown to improve the growth of Lactobacilli and Bifidobacteria probiotics. A number of studies have evaluated other types of locally-sourced honey and found that honey significantly promotes the growth and survivability of probiotics like Lactococus lactis, Streptococus thermophillus, multiple Lactobacillus species, Bifidobacterium longum BB536, Bifidobacterium lactis Bb-12, and other Bifidobacteria species. One study found that the use of a locally sourced honey from Saudi Arabia was able to support the growth of yogurt starters along with Bifidobacterium bifidum, Lactobacillus rhamnosus, or Lactobacillus reuteri even more effectively than inulin. On the whole, existing evidence suggests that honey—particularly its oligosaccharide content—acts as a selective probiotic for lactic acid bacteria belonging to Lactobacillus and Bifidobacterium, while also inhibiting the growth of undesirable microorganisms that can act as pathogens. This makes honey a potentially useful food for modifying the gut microbiome in ways to support human health! 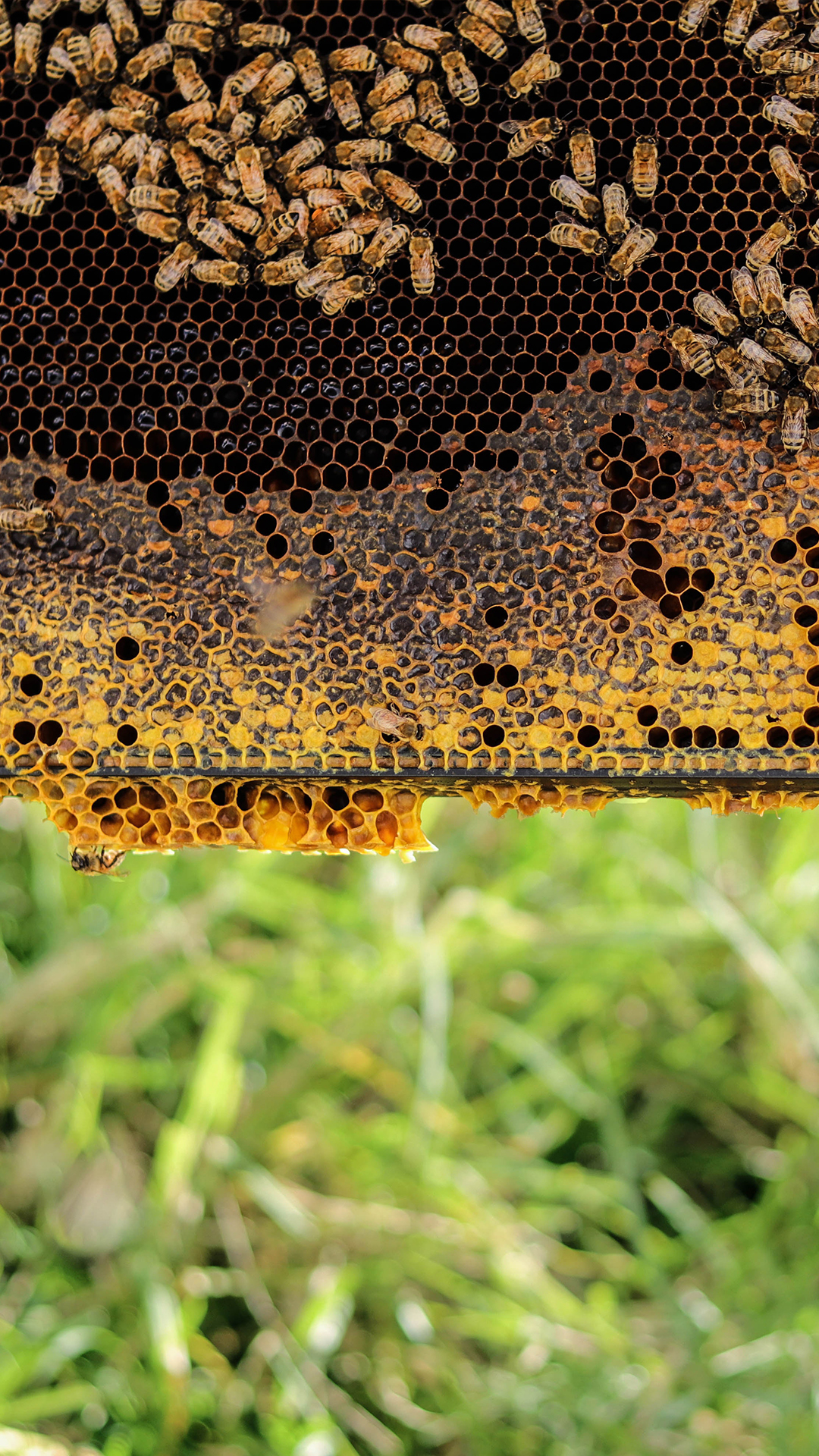 Honey has demonstrated exciting anti-cancer activity, including inhibiting the development and progression of breast cancer, liver cancer, and colorectal cancer (although evidence is accumulating for several other types of cancer as well!). For example, several experiments have shown that honey can modulate the estrogen receptor signaling pathway involved with treatments for breast cancer, and a variety of honey types have demonstrated cytotoxic effects against multiple human breast cancer cell lines (while leaving normal breast cell lines unharmed). In rats with chemically induced breast cancer, feeding honey resulted in delayed tumor development, smaller tumor size, fewer number of tumors, and lower histological grading than the control group. Amazingly, one study found that tualang honey had comparable anti-cancer effects to the drug tamoxifen (a selective estrogen receptor modulator) when it came to human breast cancer cells! These effects may be due to specific flavonoids in honey such as chrysin, which has been shown to inhibit human breast cancer cells from metastasizing.

One of honey’s lesser-known benefits involves its effects on oral health! Periodontal (gum) disease and halitosis (bad breath) have been scientifically shown to improve from honey and its bioactive components. For example, honey exerts antimicrobial activity against Porphyromonas gingivalis, the Gram-negative bacteria that causes gingivitis and periodontitis. Experiments have demonstrated that the methylglyoxal content of honey can inhibit the formation of Porphyromonas gingivalis biofilms and reduce the number of viable bacteria within existing biofilms! Similarly, honey has been shown to fight halitosis due to its methylglyoxyl component exerting antibacterial activity against the microbes that cause bad breath.

In rats with heart attacks induced by isoproterenol (a synthetic catecholamine that produces severe stress in the heart), pre-treatment with honey (in the amount of 5 g per kilogram of body weight per day, for six weeks prior to the administration of isoproterenol) was able to prevent harmful increases in total cholesterol, triglycerides, LDL cholesterol, lipid peroxide products, and heart weights, as well as decreases in HDL cholesterol and antioxidant enzymes such as superoxide dismutase, glutathione peroxidase, and glutathione reductase. In humans, honey has been shown to decrease total cholesterol and prevent rises in blood sugar. Additional research has shown that the flavonoids in honey are able to improve the vasodilation of the heart, decrease platelet clotting, prevent LDL cholesterol from oxidizing, increase HDL levels, and improve endothelial function! See also The Paleo Diet for Cardiovascular Disease

An examination of the scientific evidence clearly shows that sugar substitutes are problematic (see The Trouble with Stevia, What’s the Next Superfood Sweetener?, Is It Paleo? Splenda, Erythritol, Stevia and other low-calorie sweeteners, and Why Is Sugar Bad?) while occasional and moderate consumption of natural sugars can fit into a health-promoting diet (see Natural Sugars and their Place in Paleo, The Case for More Carbs: Insulin’s Non-Metabolic Roles in the Human Body and How Many Carbs Should We Eat?).  Blackstrap molasses earns a special status owing to its nutrient-density (see Blackstrap Molasses: The Sugar You Can Love!) and, due to its functional food properties, so does honey!  In fact, when it comes to honey, the science shows us it’s a pretty sweet deal!

Use code PaleoMom  for 15% of Beekeeper’s Naturals Honey

TPV Podcast Episode 347: How to eat Nose to Tail
Next Post: ThePaleoMom Workshop is LIVE!