The Health Benefits of the Parsley Veggie Family

The parsley family (also known as the Apiaceae family or umbellifers, due to forming umbrella-like stem structures called umbels) is a huge plant group with over 3,700 species, some of which are familiar names in our kitchen: carrots, parsnips, and celery! That’s right; these diverse veggies are all closely related. (We’ll be looking at other members of this family—angelica, anise, caraway, coriander, cumin, dill, fennel, and of course, parsley—in more detail in an upcoming post on herbs and spices.)

These foods all have unique histories that led them to their place in the modern human diet.

For example, celery cultivation traces back to about 3000 years ago to the Mediterranean region (though it wasn’t particularly tasty until later when it was bred to have thicker, sweeter, less bitter stalks), and it was first brought to America in 1856. In Ancient Greece, celery was put on graves and used to crown the dead, as well as used to make wreaths for winners of the Nemean and Isthmian Games. 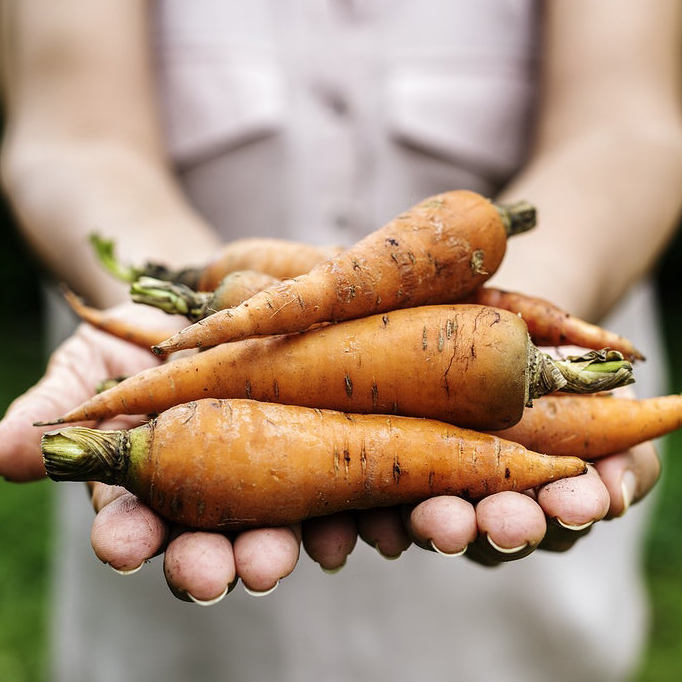 Meanwhile, carrots are such a widespread root veggie— in fact, in some languages, the word for “carrot” is the same as the word for “root”! Wild carrots are native to Europe and southwestern Asia, and it is believed that this plant originated in Persia over 5000 years ago. (Iinterestingly, it was first cultivated for its leaves and seeds, not the roots that we generally eat now.) The earliest carrots were purple, red, black, and white; the orange carrots we have today didn’t appear until the 17th century, when farmers in the Netherlands selectively bred yellow carrots to create a high beta-carotene variety.

And parsnips originated in Eurasia and were cultivated by the Romans, and were even used as a sweetener in Europe before the arrival of cane sugar! The early history of parsnips is a little fuzzy because parsnips bore such strong resemblance to carrots (which were pale-colored at the time!) that it’s not always clear which vegetable was being referred to in some older literature. In fact, parsnips and carrots were even called by the same name in some languages, such as Old English, which collectively referred the two vegetables as “moru” (meaning edible root).  And in North America, parsnips briefly served as a main form of starch before potatoes became more popular. Although they can safely be eaten raw, parsnips are more often pureed, baked, boiled, fried, roasted, grilled, or steamed! 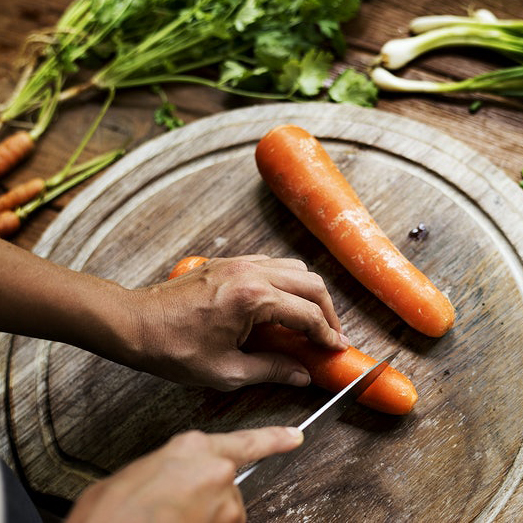 Nutrients in Carrots, Parsnips and Celery

Nutritionally, carrots, parsnips, and celery supply a range of important micronutrients and fiber. (See also The Importance of Nutrient Density and What Is Fiber and Why Is it Good?)

One cup of chopped carrots contains 52 calories, 3.6 g of fiber, 428% of the DV for vitamin A, 21% of the DV for vitamin K, and notable potassium, vitamin B6, and manganese; carrots are also one of the few good vegetable sources of the trace mineral molybdenum. And, these brightly colored roots are rich in phytonutrients that vary according to the cultivar type (such as anthocyanins in purple carrots, lycopene in red carrots, beta-carotene in orange carrots, lutein in yellow carrots, and phenolic compounds in black carrots). See also The Amazing World of Plant Phytochemicals: Why a diet rich in veggies is so important!

And one cup of chopped celery contains 16 calories, 1.6 g of fiber, 37% of the DV for vitamin K, and a decent amount of folate and potassium. See also Celery Juice: Fad or Fabulous?

Not surprisingly, members of the parsley family are valuable additions to our diet, bringing some science-backed benefits along the way! This plant group is known for containing the flavone apigenin (which has demonstrated protective effects against diabetes, Alzheimer’s, depression, insomnia, and cancer) and phytonutrients called phthalides (which have cardiovascular benefits and a blood-pressure lowering effect). See also The Amazing World of Plant Phytochemicals: Why a diet rich in veggies is so important! and Polyphenols: Magic Bullet or Health Hype?. And, plenty of studies bear out the theoretical benefits of these foods. 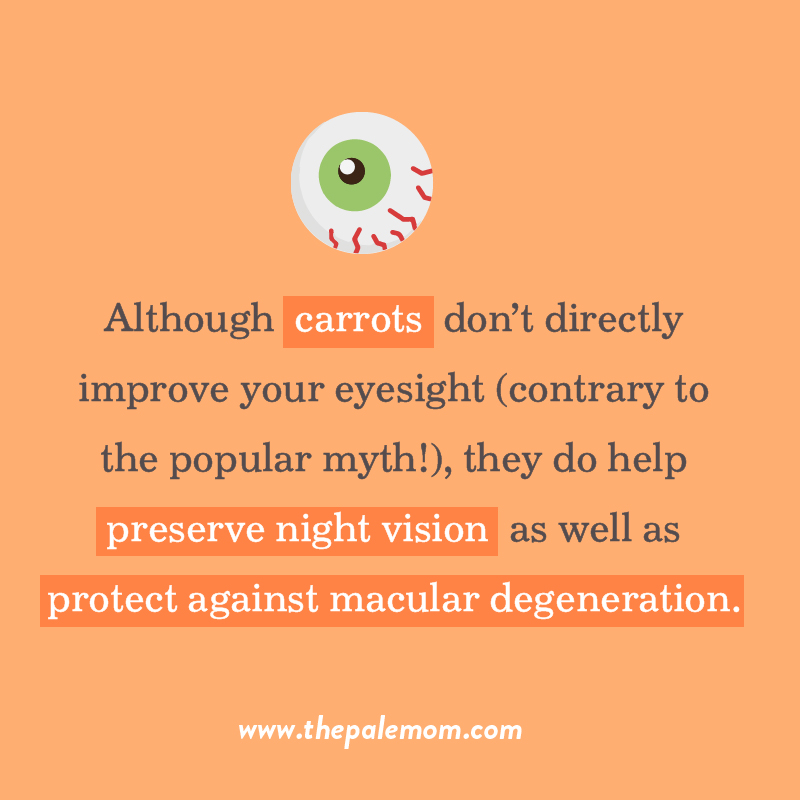 Although carrots, for instance, don’t directly improve your eyesight (contrary to the popular myth!), they do help preserve night vision as well as protect against macular degeneration. The carotenoids in carrots have been shown to neutralize the effect of free radicals and inhibit mutagenesis (in turn protecting against some cancers), and both whole carrots and carrot extracts have demonstrated anti-cancer effects against several leukemia cell lines and colon cancer (most likely due their beta-carotene and falcarinol, a highly bioactive phytonutrient). A meta-analysis of studies in humans even found that carrot consumption was associated with an 18% reduced risk of prostate cancer in men. Another large prospective cohort study found that carrots were associated with a 32% lower risk of cardiovascular disease. On top of all that, carrots appear to mitigate cholesterol absorption, reduce high blood cholesterol, and protect against liver injury.

Although parsnips haven’t been the subject of as many studies as carrots, what we do know is good news! Parsnips contain polyacetylenes that have been shown to have anti-cancer properties, while also protecting against bacterial and fungal infection, reducing platelet aggregation, being anti-inflammatory, and even affecting serotonin within the body. (Specifically, the polyacetylenes falcarinol and falcarindiol are largely responsible for these effects.)

And last but not least, in case we need a reason to eat more celery, this refreshing veggie shows promise for boosting both our cardiovascular and neurological health. In rats fed a high-fat diet, celery extract was shown to significantly lower LDL and total cholesterol, and another component of celery (L-3-n-butylphthalide) has been shown to have neuroprotective effects on vascular dementia and Alzheimer’s disease, while also helping to lower blood pressure. And, celery’s very high water content and low energy density makes it an excellent choice for weight management! Again, see Celery Juice: Fad or Fabulous?

Parsley Family Veggies Are Great for the Gut

Lucky for us, the health benefits of the parsley family extend all the way to the gut; see also What Is the Gut Microbiome? And Why Should We Care About It?. 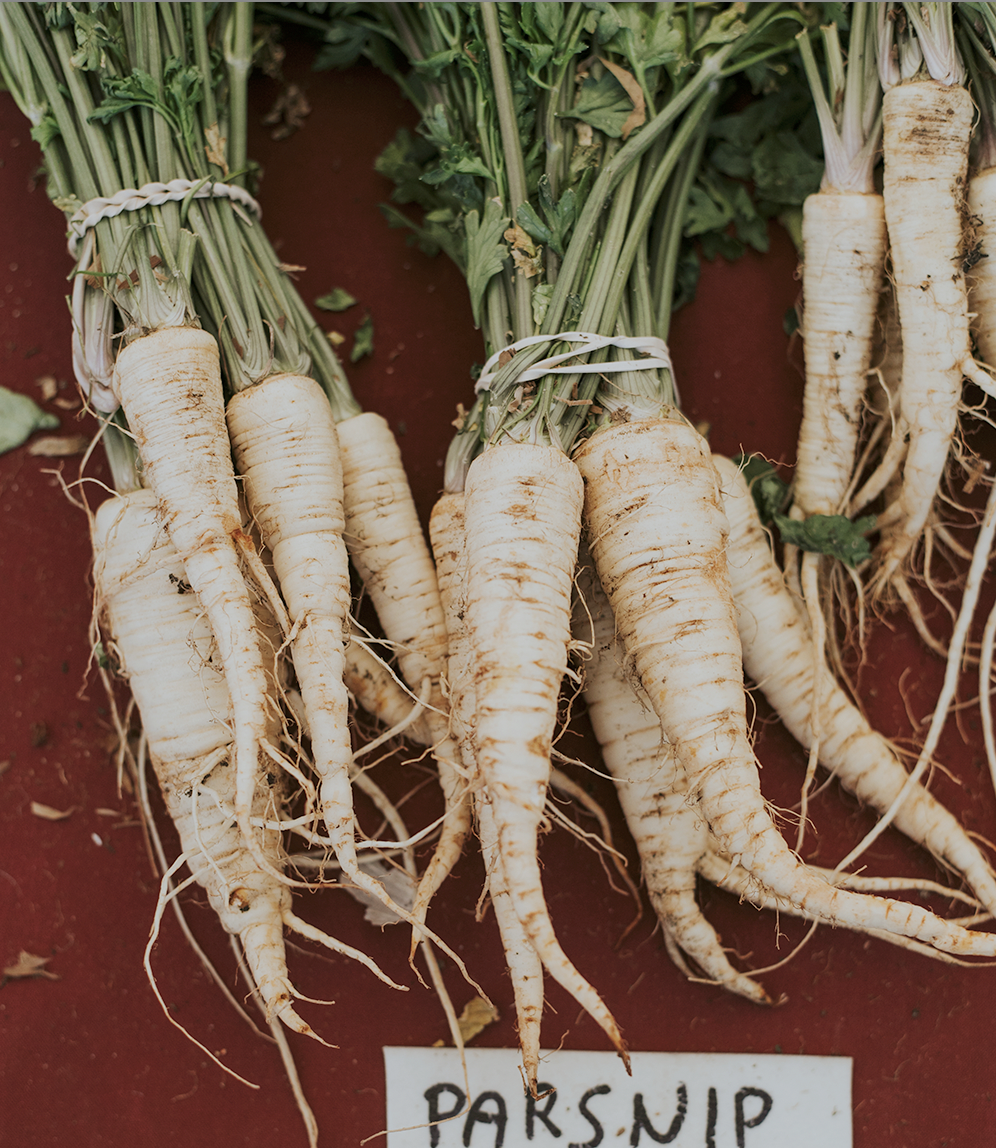 For example, the parsley family’s famous flavone apigenin has antimicrobial activity against a number of potential pathogens, including Klebsiella pneumoniae, H. pylori, E. coli, Proteus mirabilis, Candida albicans, Salmonella enterica, and Streptococcus pyogenes. Chrysin, a phytonutrient in carrots, has been shown to interfere with the effects of dietary fructose at the intestinal level, along with reducing intestinal inflammation and supporting increased populations of Alloprevotella and Lachnospiraceae while decreasing pathogenic Escherichia_Shigella. Luteolin in carrots exerts antibacterial effects against Bacillus subtilis, Staphylococcus aureus, Pseudomonas fluorescens, and E. coli. In one study, extracts from peeled and shredded carrots showed antimicrobial activity against a number of potential pathogens—including Listeria monocytogenes, Staphylococcus aureus, Escherichia coli, Candida lambica, and Pseudomonas fluorescens.

Carrots may also impact the gut microbiota differently depending on how they’re prepared! In one experiment, researchers tested the in vitro fermentation rates of cooked carrot cell clusters versus smaller cell wall fragments, and found that the larger cell clusters (with an average particle diameter of 137-298 μm) underwent more rapid fermentation and produced more SCFAs than smaller single cells (75 μm) or cell fragments (50 μm). The researchers determined that the environment of the between-cell junctions promoted bacterial growth to such an extent that it outweighed the effects of the greater relative surface area seen with smaller particles (which typically drive more rapid fermentation than particles with less relative surface area). See also TPV Podcast Episode 335: How Many Vegetables Part 3: Souping vs Smoothies and Move Over, Smoothies and Juice? The Soup-rising Benefits of Souping! 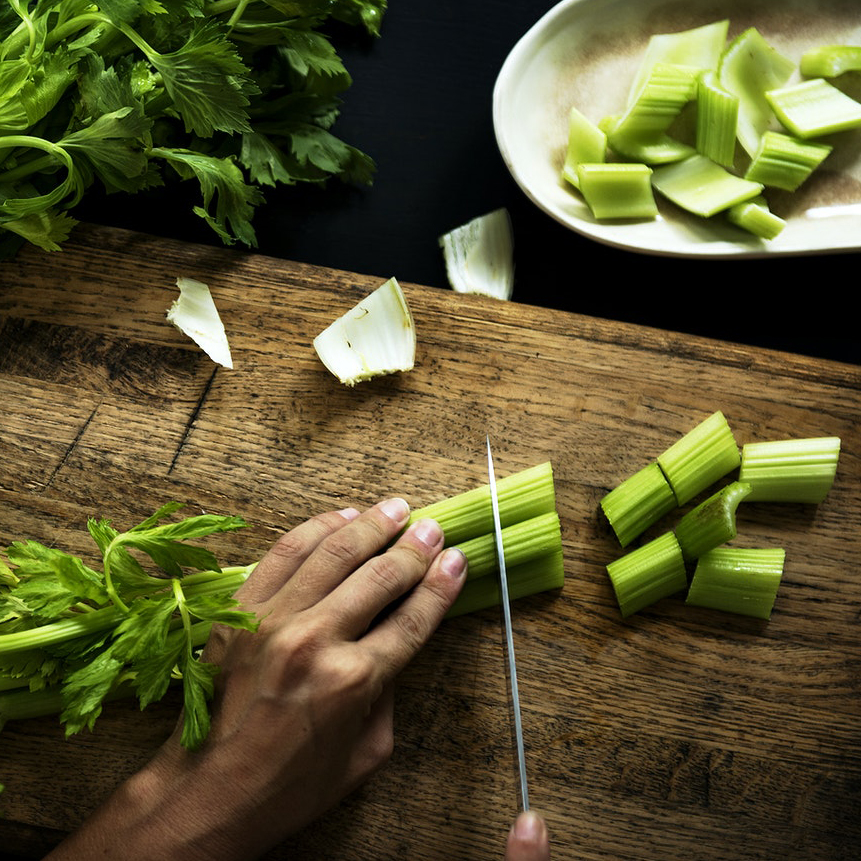 Meanwhile, the phytochemicals in parsnips have unique effects on the gut microbiota and overall intestinal health. For example, falcarinol and falcarinodiol have been shown to suppress colon cancer and also reduce the growth of several pathogens, including Bacillus cereus and Mycobacterium fortuitum.

Celery likewise offers some important benefits for gut health. For one, celery (along with other members of the Apiaceae family) is known for its high concentration of phenolic compounds, especially the flavones apigenin and luteolin. Luteolin exerts antibacterial effects against Bacillus subtilis, Staphylococcus aureus, Pseudomonas fluorescens, and Escherichia coli, while apigenin has antimicrobial activity against a number of potential pathogens, including H. pylori, Klebsiella pneumoniae, E. coli, Proteus mirabilis, Salmonella enterica, Candida albicans, and Streptococcus pyogenes. In 2009, a novel compound identified in celery seed was shown to have antimicrobial activity against H. pylori. In addition, celery is a rich source of cellulose, which decreases colon transit time and increase the abundance of Bacteroidaceae. See also Celery Juice: Fad or Fabulous?

Carrots, Celery and Parsnips for the Win!

In all, the parsley family is well worth including in our diets. Not only are these foods versatile and tasty, they’re also teeming with vitamins, minerals, and phytonutrients. To get the best bang for your buck, eat them all, and choose from the rainbow when possible (purple carrots, I’m looking at you!).