Pemmican is a traditional food of the native peoples of North America.  It is a concentrated mixture of fat and protein, and was adopted as a high-energy food by explorers and those involved in the fur trade in the early 20th century.  Traditionally, the meat (typically bison, moose, elk, or deer) was cut in thin slices and dried over a slow fire or in the hot sun until it was hard and brittle.  It was pounded nearly into a powder using stones and mixed with melted fat.  Sometimes dried fruits, typically berries, were also pounded into a powder and added to the mixture.  Traditionally packed into rawhide pouches for storage, pemmican keeps indefinitely.

For the Paleo community, pemmican is a unique opportunity to create a meal replacement.  Think of this as the caveman’s protein bar.  A perfect post-workout meal or snack on the go, pemmican provides concentrated protein and calories in a way that is hard to find in the absence of grains, legumes and dairy.  It’s portability also makes it a great way for endurance athletes to replenish protein and glucose while training (you may want to consume both pemmican and a glucose-rich juice or fresh fruit for the added glucose during training).

My approach to pemmican wasn’t traditional.  My approach was to use the idea of pemmican to create something that was more like a meal-replacement bar (something I could eat when short on time or wolf down quickly after a tough yoga class).  I decided to include dehydrated, pulverized green vegetables (spinach and kale) to the mix to increase the mineral and phytonutrient content.  I decided to leave my dried fruit a little on the chewy side and in slightly bigger pieces to add some texture.  I used blueberries for their very high antioxidant content and apricots for their very high glucose to fructose ratio (I used dried apricots because it was more cost effective).  I decided to go a little light on the fat, just enough to hold everything together, because I was adding so much energy to the bar by adding both fruits and vegetables.  As I said, I approached this as creating a meal replacement, rather than recreating a historically-accurate pemmican (which would not have vegetables and would be closer to a 1:1 ratio of meat to fat).

The result was something that was actually quite palatable.  It is not sweet, and as someone who used to pack in the double chocolate fudge whey-based protein bars, this was a little disappointing.  They taste healthy, if that makes any sense.  And the more I ate, the more the flavor grew on me.  I used some coconut oil in my mix because the flavor worked very well.  These bars were soft after sitting in a warm car, but still held together.  However, if you want these bars to reallytravel, I suggest substituting more tallow.

Also, I dried everything in my Food Dehydrator

(see this post).  You could do all of this in your oven on the lowest temperature, but I have no idea how long it would take, so if you’re going to try this, you’ll need to experiment.  I used beef heart because I love the flavor, especially for jerky, and it dries so well.  You could use flank steak or lean ground meat (beef or bison) instead.  This recipe made 8 candy bar-sized snack bars, which I figure are comparable to a typical meal replacement bar.  This recipe can easily be scaled up or down.  Also note that because the fruit wasn’t completely dried, I opted to store these bars in the fridge (but I think they would keep for a very long time in there). 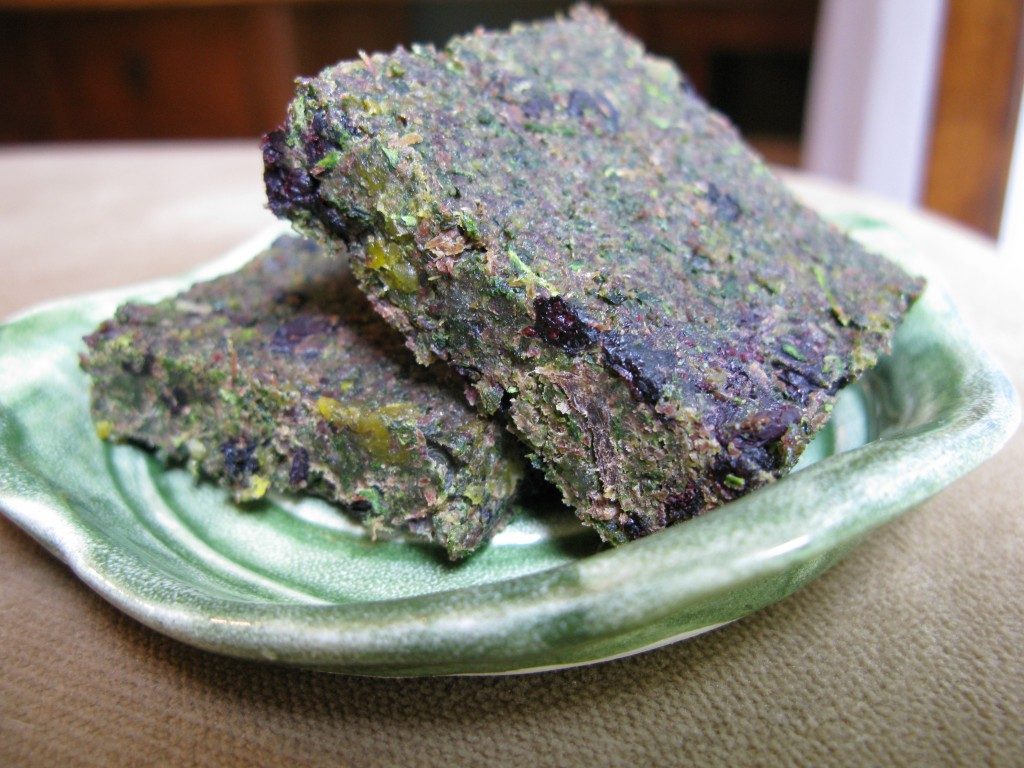 1.    Slice beef heart (or flank steak) into ¼”-thick slices and lay on a tray (or two) of your Food Dehydrator

.  It is easier to slice if the meat is partially frozen.  I like the trick of moving it from the freezer to the fridge the night before.  Alternatively, you can form ¼”-thick patties of ground meat.
2.    Dehydrate meat for 5-6 hours, until quite firm and most of the moisture is gone.
3.    Place chopped spinach and kale onto a Fruit Roll Sheet

(or two) on a tray in your Food Dehydrator

in your Food Dehydrator

.
4.    Dehydrate another 3-4 hours, until the greens are completely crisp and the blueberries are quite small, wrinkled and chewy.  At this point the meat should be completely crisp as well.
5.    Grind meat and greens in a Food Processor

as finely as possible.
6.    Finely chop apricots or process in your food processor.  Melt coconut oil and tallow.
7.    Mix blueberries, apricot, greens and meat together in a bowl.  Add melted coconut oil and tallow, stirring until completely incorporated (if it isn’t holding together for you, add more tallow and/or coconut oil 1 Tbsp at a time until you have a fairly moist sticky dough).
8.    Press into a 9×9 inch pan.  Chill until firm and cut into squares or bars.

“If I Can’t Always Afford Grass-Fed Beef, What Should I Buy?”
Next Post: Simple Shrimp Feast