5 Gut Health Tests You Can Do at Home

With digestive disorders and microbiome issues making the headlines left and right, many of us are wondering just how healthy our guts are. After all, the state of our gut can influence our immune function, risk of chronic disease, allergies, autoimmune reactions, food intolerances, and possibly even our body weight—among countless other things!

A number of professional tests can help diagnose leaky gut; SIBO and other forms of gut dysbiosis; infections like C. difficile and H. pylori; parasite infection; inefficient digestion of fats, proteins and/or carbohydrates; and of course, diseases of the gut like diverticular disease, ulcerative colitis, and celiac disease. Certainly, if you’re worried about a serious health issue, it’s imperative to go to your doctor and have a detailed conversation.  But, what if you’re just curious about how things are going in there?  What if you’re looking to understand the difference between meh, good, and amazing?  It’s not always convenient to go to the doctor just because we’re curious about our digestive health, or to spend money sending stool samples off to a lab to get analyzed. Fortunately, there are a few tests we can do at home to gauge the state of our gut health and see if we have indications of a problem!

Fair warning:  you’re going to have to look at your own poop.

In fact, visually inspecting every bowel movement is a great habit for keeping track of gut health.  Please do not take photos of your poop and send to friends, family members or bloggers (including me).  Photos of poop should only be shared with your physician during an appointment.

“Bowel transit time” refers to how long it takes for the food we eat to pass through our digestive system and get eliminated in a bowel movement (in other words, the time from swallowing to pooping!). This type of test can help diagnose constipation (which can indicate a gut flora imbalance or a diet too low in fermentable substrates), as well as abnormally rapid transit times (which can indicate malabsorption of food, and certain diseases like Crohn’s).

In clinical settings, doctors monitor bowel transit time by having people swallow capsules filled with dyes or markers that show up on an X-ray. But, we can conduct a similar test at home (no capsules needed!) by eating food that will be easily identifiable in a bowel movement.

Any of the following foods will do the trick:

Here’s how it works. Whichever food is used, we simply note the time we eat it, and then watch and wait for when it “re-appears” in a bowel movement! Sesame seeds or corn will be easy to spot, and beets will give a distinct purple-red color (keep in mind, beets can pigment urine as well, so don’t get worried if you see some pinkish pee!).

An optimal transit time is considered to be 12 to 48 hours. Longer than 72 hours indicates constipation and the possibility of other gut pathologies. (Studies have shown that even when eating the same diet, men tend to have significantly faster transit times than women. So, if you’re female, you might be on the higher end of that normal range, while men might expect to be on the lower end.)

That being said, some foods will naturally move more slowly or quickly through our digestive systems depending on their fiber and water content, how hydrated we are, whether we’ve recently had caffeine or alcohol, and a variety of other factors. So, it’s recommended we repeat this test three times (during different parts of the day) to get a ballpark average of our bowel transit time!

A famous way to gauge the health of our bowel movements (and clue us in to potential gut disorders) is the Bristol Stool Form Scale. This is a visual aid that classifies feces into seven different categories, and was first developed in the 1990s by researchers at the University of Bristol (hence the name!) to help distinguish abnormal bowel movements from healthy ones.

Here’s a rundown of the categories! 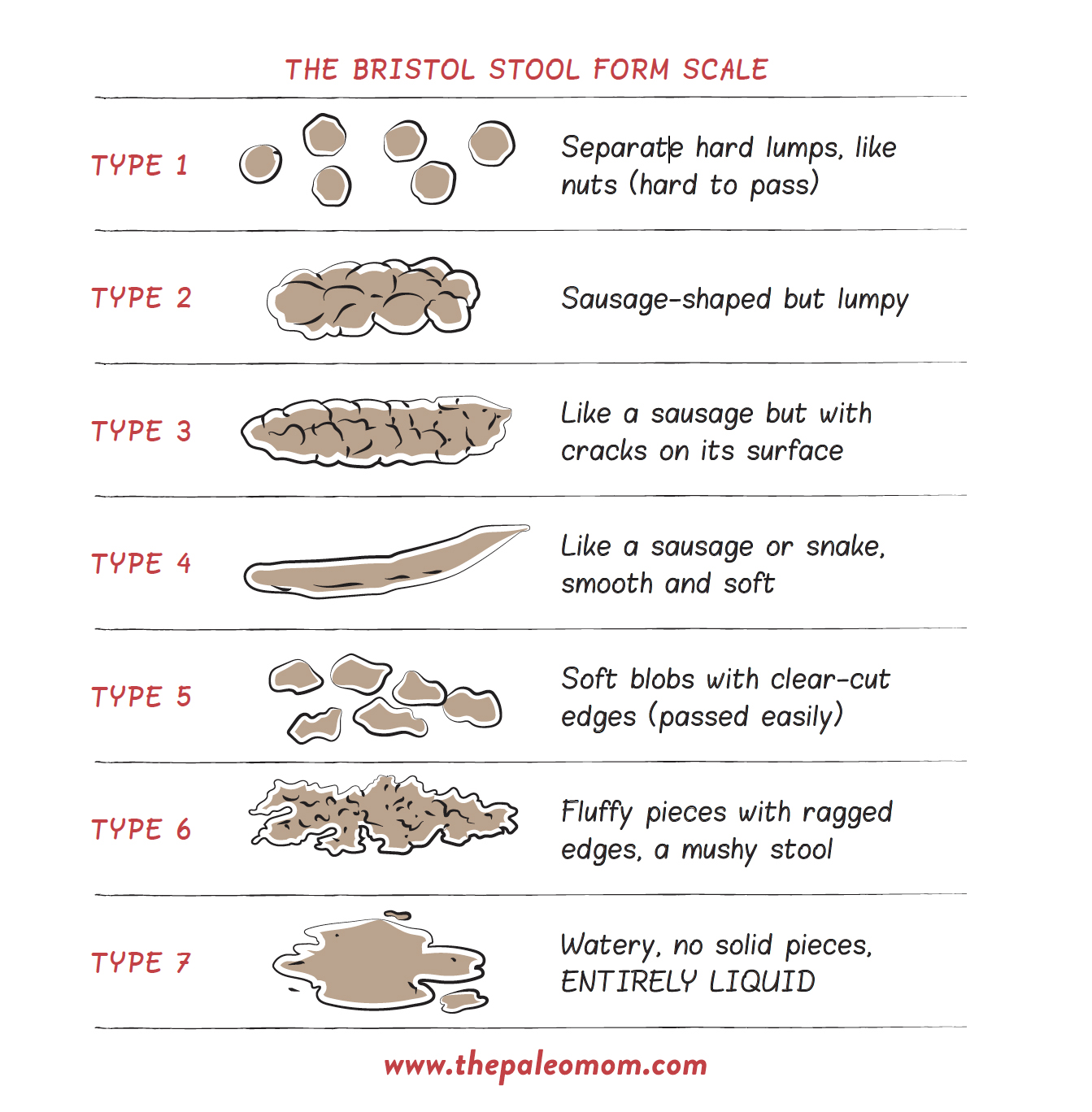 Basically, the Bristol stool chart is another way to help estimate bowel transit time (the longer poop stays in our bodies, the more dry and hardened it becomes; the faster it exits, the more mushy and loose it will be). But, the chart can also be used to pinpoint gut disorders in a more specific way!

So, frequently experiencing stools that match Type 1 or 2 and Type 6 or 7 may indicate a problem that should be investigated with further testing, or with the help of a gut health specialist!

Along with gauging bowel movements against the Bristol Stool Form Scale, some other visual indicators can tell us a lot about or gut health!

Floating poop: “Floaters” (stools that float to the surface in the toilet) are usually caused by diet-induced gas, but they can also result from a bowel infection, lactose intolerance, pancreatic diseases, gallbladder diseases, and certain other health conditions. (Contrary to popular belief, undigested fat is not the cause of floating feces! This belief was debunked by experiments from the 1970s.) If no other symptoms are present, floaters usually don’t indicate a problem. But, when accompanied by gastrointestinal distress or other signs of gut dysbiosis, or when extremely consistent, they might point to an underlying disorder, or a gut microbe imbalance.

Undigested food particles: When we can spot obvious food particles in our stools, there can be a few different causes—some of them harmless, others that indicate a potential problem. Not chewing well enough, gulping large amounts of liquid while eating, eating too quickly, and consuming hard-to-digest foods (like small seeds, nuts, corn, and the tough skin of certain fruits and vegetables) can all lead to unwanted food particle sightings!

But, undigested food (especially when the particles are from items that should have been digested thoroughly) can also suggest intestinal inflammation, poor absorption, low hydrochloric acid in the stomach, a deficiency in enzyme excretion in the pancreas, and more serious underlying health conditions. Any time undigested food makes a frequent appearance in our stools, it’s a good idea to find the root of the problem (i.e., talk to your doctor)!

Along with the tests above, bowel movement frequency can tell us about the state of our gut health. Although there isn’t a specific, ideal number of bowel movements each person should have every day (that “ideal number” will change a lot depending on a person’s diet!), a frequency of three times per day to three times per week is generally considered fine. More or less often than that could indicate problems with poor absorption or constipation, respectively.

If you do find yourself on the lower end of the normal spectrum, it may indicate that it’s time to up your vegetable intake. One of my favorite quotes is from Dr. Jeff Leach of the Human Food Project who said on an episode of the Revolutionary Health Radio podcast: “I tell everybody if you’re not having two to three bowel movements a day, then you need to go back and start over, and one of them should be a whopper.  If you’re not having that kind of bowel activity, then you’re not fermenting enough – again, assuming you don’t have other issues – and so you need to increase the diversity and quantity of fiber.”  I think it’s the term “whopper” to describe a bowel movement that gets me giggling like a 7-year old boy.

Another simple way to tell if we might have a gut disorder is by looking for symptoms that suggest abnormal digestive health. If we experience any of the following (and especially if more than one item on the list rings true! and when they’re relatively consistent complaints!), an underlying gut disorder is a definite possibility.

So, what should we do if these home tests suggest our gut health is less than stellar? For one, we can take dietary and lifestyle steps to heal our gut (including sleeping enough, reducing stress, and taking specific measures to target leaky gut), consume plenty of fiber to help feed beneficial flora, and avoid foods and substances that can harm our microbiome. If a more serious condition seems to be at hand (like Crohn’s disease or an infection), professional testing by a healthcare provider (especially a gut health specialist!) can help us identify the problem and figure out the best plan of action.