You are here: Home / Gut Health / Why Bee Products Are Great for the Gut Microbiome

Nearly everyone has heard of (and tasted!) honey, but did you know that a number of other bee products also have proven health benefits? It’s true! While honey definitely deserves the positive attention it’s been getting (see Honey: The Sweet Truth About a Functional Food!), the lesser-known propolis, royal jelly, and bee pollen also deserve some time in the spotlight. And, these foods just so happen to exert many of their effects via the gut microbiota. (Need a primer on why the gut microbiome is one of the most important—and fascinating!—mediators of our health? Then check out What Is the Gut Microbiome? And Why Should We Care About It?) 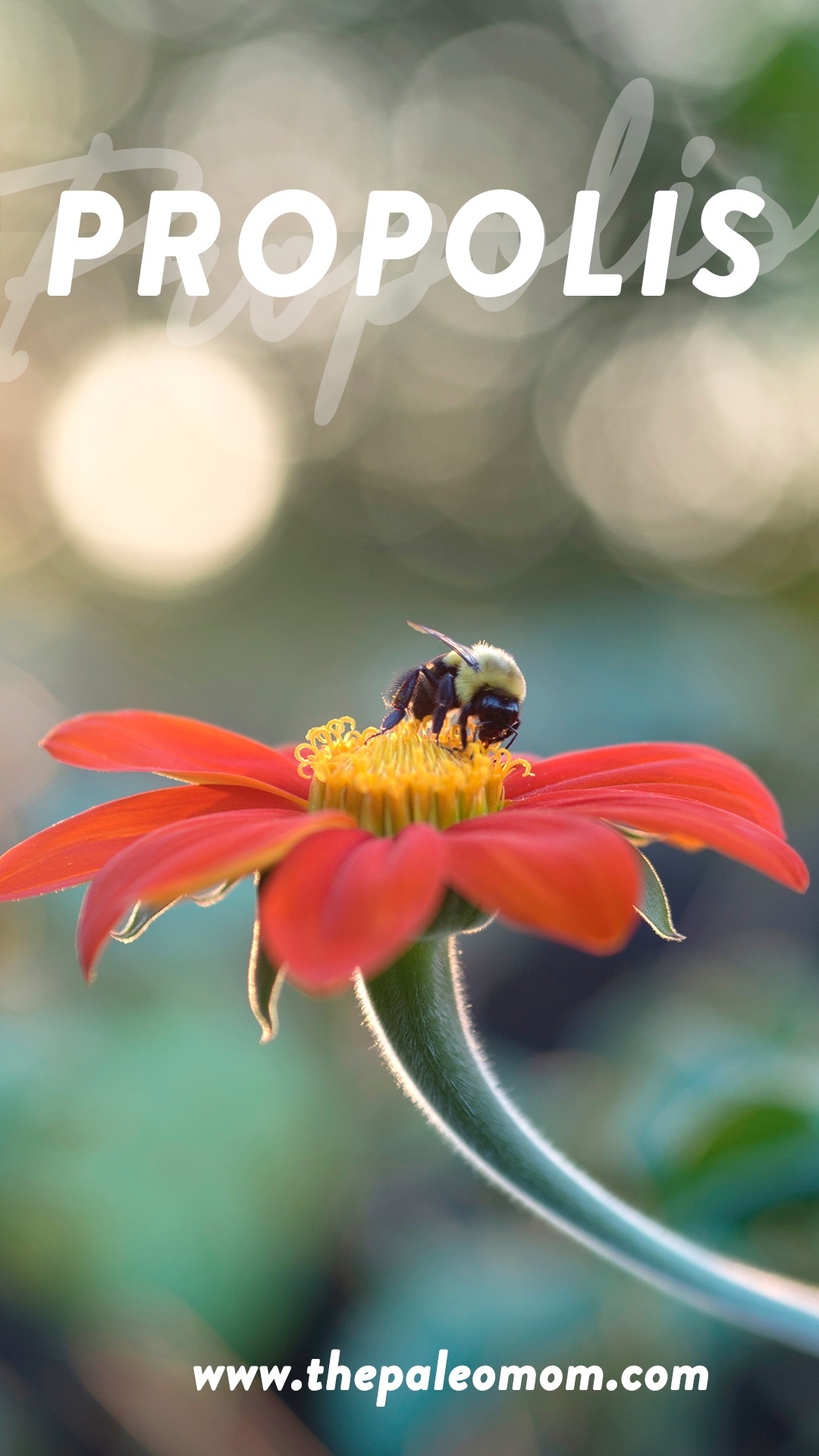 Propolis (also called “bee glue”) is a substance that bees use to protect and sterilize their hives. It’s made from a mixture of beeswax, bee saliva, and plant resins from buds or sap (more specifically, it’s composed of about 50% resin, 30% wax, 10% essential oils, and 5% oil, and 5% other organic compounds, including resveratrol, caffeic acid, cinnamic acid, and the flavonoids pinocembrin, acacetin, chrysin, rutin, luteolin, kaempferol, apigenin, myricetin, catechin, naringenin, galangin, and quercetin!). Over 300 compounds have been identified in propolis so far, and it also contains a range of micronutrients such as vitamins B1, B2, B6, vitamin C, vitamin E, magnesium, calcium, potassium, iron, sodium, copper, zinc, manganese, and iron.

A variety of studies have shown that propolis has antiseptic, antibacterial, antifungal, anticancer, antiulcer, antioxidant, anti-inflammatory, and immune-modulating properties, which often work through the intestinal microbiota! Propolis has antifungal activity against pathogenic yeasts like Candida albicans, Candida parapsilosis, Candida tropicalis, and Candida glabrata, possibly due to its content of volatile compounds such as α-pinene, β-pinene, δ-cadinene, decanal, and phenyl-, ethyl-, and benzyl alcohol (depending on the geographical source of the propolis, the presence or absence of these compounds can vary!).

Some studies have shown that propolis can help treat giardiasis (infection with the Giardia parasite in the small intestine), with one clinical trial showing that propolis is even more effective at curing giardiasis than the conventional treatment drug (a cure rate of 52 to 60% with propolis, versus 40% for the conventional drug). Another study found that propolis can be used to treat gastric ulcers due to its anti-acid, anti-inflammatory, and anti H. pylori activities.

In mice, propolis has been shown to counteract the harmful effects of a high-fat diet on the gut microflora, including reversing the increased proportion of Firmicutes and inflammatory biomarkers associated with high-fat feeding. In one mouse study, propolis decreased blood levels of endotoxin (a type of toxin found in the outer membrane of certain bacteria, which can trigger strong immune responses and inflammation in our bodies). Propolis also reduced inflammation by lowering the expression of the TLR4 pathway. Although more research is needed in humans, this suggests that propolis might have a beneficial effect on the gut microbiome by stabilizing the microbial profile and reducing endotoxin transport out of the gut and into the blood!

In a study of rats with chemically induced colitis fed a Western-style diet (high in fat and sugar), propolis supplementation at the level of 0.3% was able to significantly improve colitis symptoms, reduce the disease activity index, improve the distal colon tissue structure, and significantly increase the gut microbial diversity, including an increase in Acidobacteria and Proteobacteria (although the Proteobacteria phylum contains some pathogens associated with IBD, such as E. coli, propolis may spur an increase in the non-pathogenic members of this group, which then out-compete the ones that contribute to the inflammatory process of gut diseases). The researchers speculate that these effects could be due to specific polyphenolic compounds found in propolis, including chrysin (which has been shown to improve inflammatory bowel diseases in mice), kaempferol (which can suppress inflammation from chemically induced colitis in mice), apigenin (which has intestinal anti-inflammatory activity), and caffeic acid (which suppresses upregulation of inflammatory markers and intestinal damage in mice). These polyphenols have generally been shown to have antimicrobial and microbiota-modulating properties. 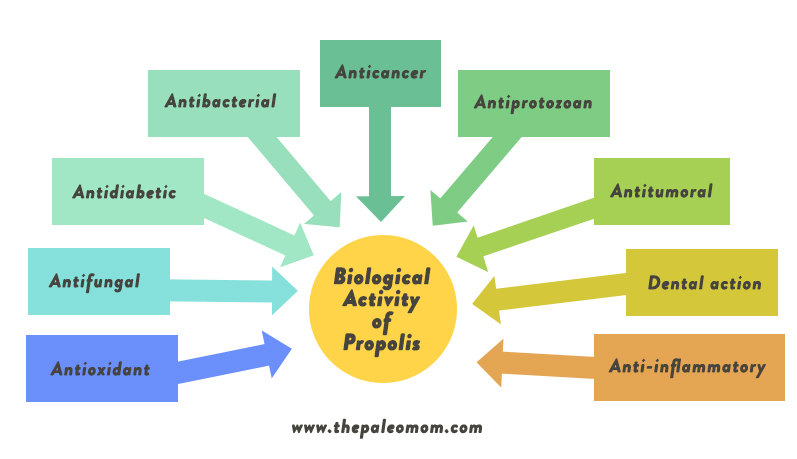 I recommend Beekeeper’s Naturals Propolis Spray! With only three ingredients, this Propolis Spray is naturally antimicrobial while providing powerful antioxidants! It’s super soothing on a sore throat, but can also be used as a preventative. 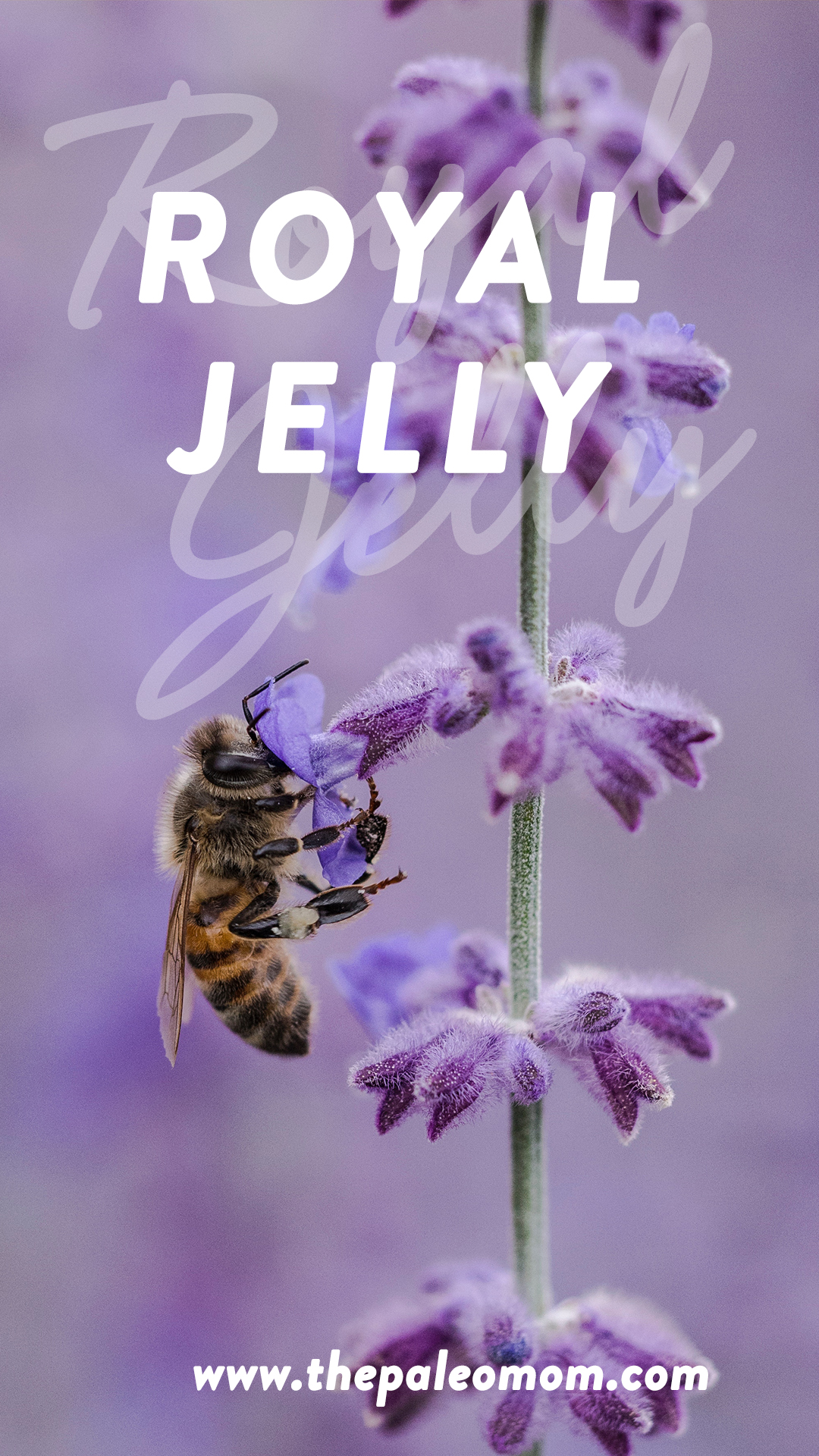 Royal jelly is a white, jelly-like substance secreted by honeybee workers to feed newly hatched larvae, developing queen bees (it contains royalactin, the compound that allows a larva to transform into the queen bee), and mature queen bees (consuming royal jelly as their main food source is the main reason queen bees live over 20 times longer than other bees!). It contains about 50-60% water, 18% proteins, 15% carbohydrates, 3-6% lipids, and 1.5% mineral salts, vitamins A, C, D, and E, and 185 organic compounds, along with hormones such as testosterone, progesterone, prolactin, and estradiol. Not surprisingly, it has a long history of use in traditional Asian and ancient Egyptian medicinal practices!

Although much of the research involving royal jelly has focused on its benefits for reproductive function, brain health, anti-aging, and wound healing, it also has the potential to selectively promote the growth of probiotic bacteria in the gut while suppressing the growth of pathogens! More specifically, research has shown that royal jelly helps increase populations of Bifidobacterium animalis spp. lactis (which has been shown to boost immunity, fight infection, improve blood sugar control, reduce inflammation, and improve blood lipid profiles), Lactobacillus casei (which has anti-diabetic effects can suppress inflammation), and Lactobacillus acidophilus (which competitively excludes pathogens in the gut), while exerting antibiotic effects against Salmonella, E. coli, Micrococcus pyrogens, Proteus, Staphylococcus aureus, Klebsiella pneumoniae, Candida albicans, and Bacillus subtilis. These effects are due, at least in part, to the trans-10-hydroxy-2-decenoic acid (10-HDA) and 10-hydroxydecanoic acid present in royal jelly, which display significant antibacterial activity, as well as antimicrobial peptide called jelleins that can act against certain gram-positive pathogens. A 51-amino-acid peptide called royalisin in royal jelly has also been shown to have antibacterial activity against Staphylococcus, Streptococcus, Bacillus subtilis, Micrococcus luteus, Sarcina lutea, Clostridium, Corynebacterium, Lactobacillus helveticus, Paenibacillus larvae, and Leuconostoc.

Use code PaleoMom  for 15% off Beekeeper’s Natural B. LXR 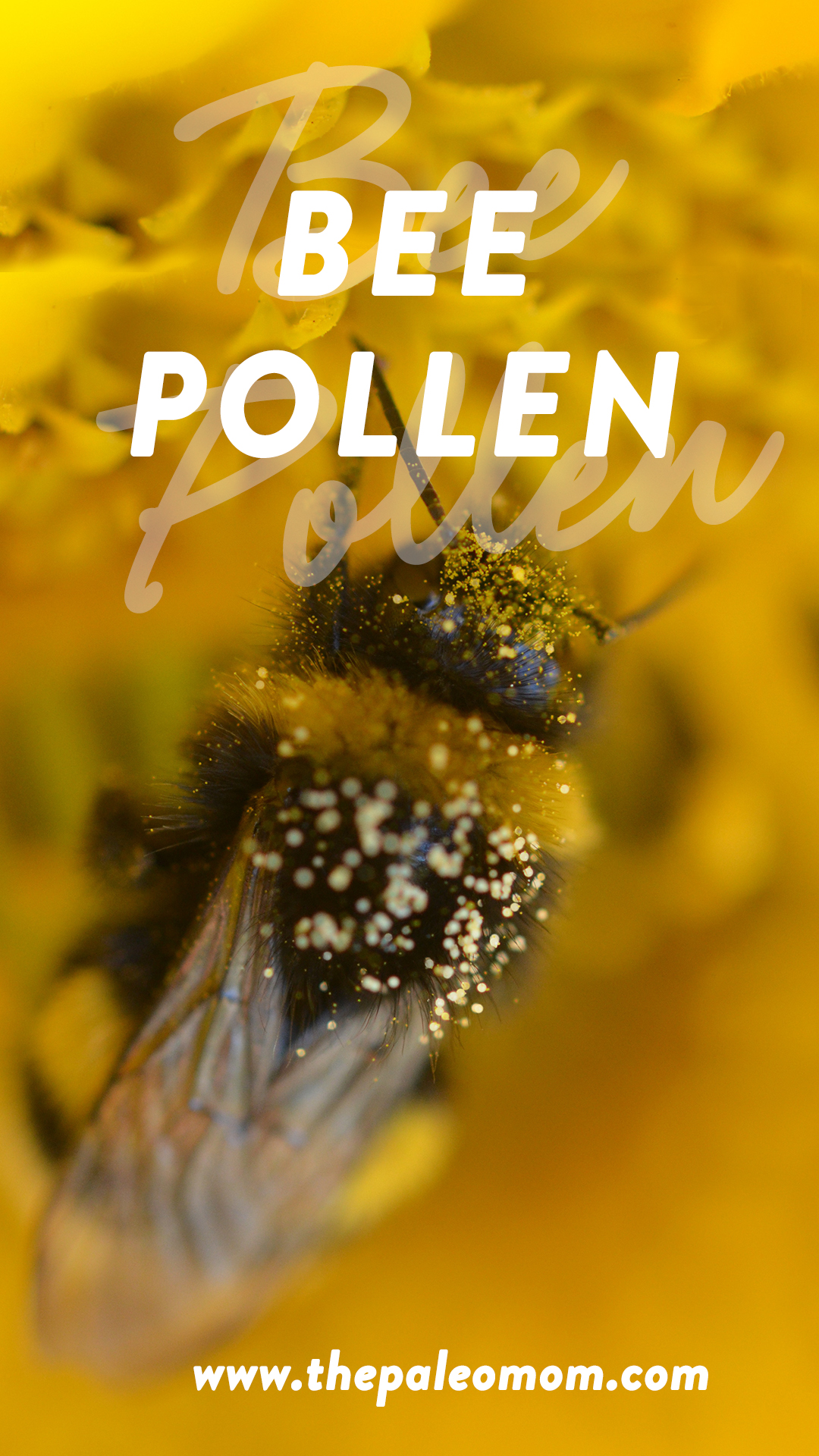 Bee pollen is made from pollen gathered from flowering plants and then mixed with bee saliva or nectar. If you’ve ever seen a honeybee up close that had its hind legs bulging with yellow sacs, those are its pollen loads—pollen collected into built-in baskets on its legs (called corbiculae). Bees bring this pollen back to their beehive, where it gets packed into honeycomb cells and serves as a protein source for the bee colony. Bee pollen contains about 250 different substances, including micronutrients (such as B vitamins, vitamin C, vitamin E, calcium, magnesium, phosphorus, and trace elements such as copper, iron, manganese, and zinc), hormone-like growth factors (such as auxins and gibberellin), amino acids, sugars, lipids, and phytochemicals (including phytosterols, carotenoids, and flavonoids).

Along with being integral for the health of bee colonies, bee pollen has a longstanding reputation as a medicinal food for humans! A range of studies have demonstrated anti-inflammatory, antioxidant, liver-protective, immune-boosting, and pain-relieving activities. And, like royal jelly, bee pollen has been shown to stimulate the growth of important probiotic bacteria in our gut! Among the species tested, bee pollen was able to dramatically enhance the growth of Lactobacillus acidophilus, Bifidobacterium animalis, Lactobacillus casei, and Bifidobacterium animalis spp. lactis. Additional research has shown that bee pollen is antibacterial against Staphylococcus aureus, a pathogen.

Use code PaleoMom  for 15% off Beekeeper’s Naturals Bee Pollen

So, when it comes to bee products, we shouldn’t stop at honey! Propolis, royal jelly, and pollen all offer unique benefits for our gut and health in general. We might even say they’re the bee’s knees!

And, if you want to keep things super simple with one tasty supplement that contains all of the above, I recommend Beekeeper’s Naturals B. Powered! It’s combines ALL the superfoods of the hive in one!

Use code PaleoMom  for 15% off Beekeeper’s Naturals B. Powered