You are here: Home / Nutrition / The Diet We’re Meant to Eat, Part 3: How Much Meat versus Veggies?

In the first two parts of this series (here and here), I looked at the (hotly debated!) question of whether humans are innate herbivores, carnivores, or omnivores from a variety of scientific angles: evolutionary history, surveys of modern hunter-gatherers, clues from our primate relatives, comparative anatomy, and our unique genetic adaptations to starch and dairy. 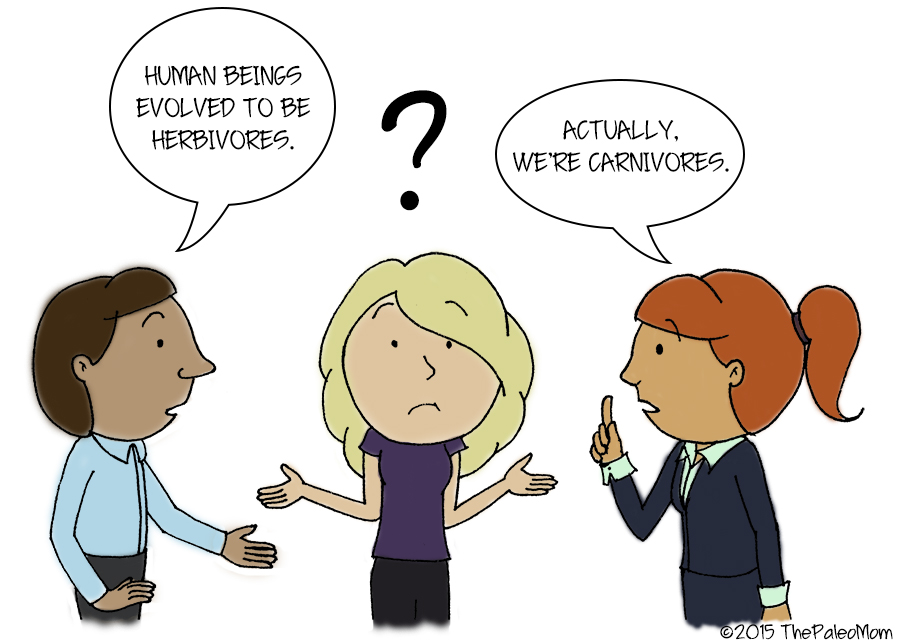 Yes, Part 1 and Part 2 contained A LOT of information, but I promise the goal wasn’t to drown you in a geek-fest of facts and figures! I wanted to demonstrate that no matter which angle we approach it from, the answer is the same: humans are very clearly omnivores. Our need for (and adaptation to) both plants and animals is written all over our history, anatomy, and DNA. The rationale for claiming otherwise doesn’t hold up to scientific scrutiny, no matter what’s floating around on The Google and in Facebook memes! 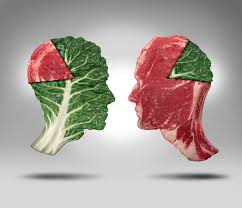 But, that brings us to another important issue: we might be omnivores in a general sense, but what exactly does that mean? How much animal versus plant products should we be eating? How much meat do we really need in order to be healthy? How many vegetables does it take to cover our phytochemical bases? How far can we tilt in the direction of mostly plants or mostly animals before we start running into trouble? In other words, how do we do this omnivore thing the right way?

The short answer to all these questions is, “There’s no exact answer!” Your nutritional needs depend on a huge number of factors, ranging from your health status to your activity level to your age to your genetics (and that’s just scratching the surface of relevant variables). But, we can still estimate what to shoot for as an average based on the available evidence, both observational and clinical. And a good place to start is with hunter-gatherer populations, who’ve figured out how to feed generation after generation of healthy, chronic-disease-free humans. Let’s dive in!

As I mentioned in Part 1 of this series, the exact menu of our early ancestors is impossible to piece together without a time machine. (And that’s totally okay! This isn’t an historical reenactment. Rather, understanding what our Paleolithic ancestors ate is a starting point for understanding what shaped our nutritional needs and how to best feed our bodies now.) We do, however, have plenty of evidence from more recent hunter-gatherer populations that showcase what kinds of plant and animal food combinations can deliver awesome health. 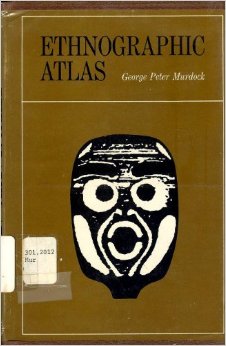 widely cited paper by Loren Cordain, et al. analyzed data for 229 hunter-gatherer societies (as recorded in an ethnographic atlas), and found that the vast majority of tribes ate between 45 and 65% of their diet as animal foods (as a percent of total energy), with 35 to 55% of their diet coming from plants. (Tribes that fell outside those ranges were typically from polar regions (like the Inuit), where genetic mutations made it possible to thrive on an extremely high meat intake, or equatorial regions, where the greater bounty of nutrient-dense vegetables and fruits skewed the ratio more towards plant foods.) Because many of those 229 tribes were from North America (where hunting dominated) and relatively fewer were from Africa, Asia, Australia, and South America (where starchy or fatty plant foods were a frequent staple), the average proportion of plant foods might be a bit higher in reality than Cordain’s analysis reflected. (For instance, the !Kung bushmen of southern Africa ate about 33% of their diet as meat and 67% of their diet as plant foods, because they made use of the energy-dense mongongo nut in lieu of a higher animal food intake.)

So, as a ballpark figure, we could say that hunter-gatherers average about half of their diet (calorie-wise) as animal foods and about half as plant foods—with lots of wiggle room thrown in on either side! What’s for certain is that whenever both meat and vegetation is abundant, humans tend to gravitate towards a truly omnivorous diet that’s about equal parts plants and animal, rather than anything nearly herbivorous or nearly carnivorous. That ensures a broad micronutrient intake and plenty of fiber, phytochemicals, high-quality protein, and essential fats. For those of us who can only hunt and gather in the supermarket, 50-50 is still a pretty safe ratio to aim for!

But wait! Keep in mind that 50% of your dietary calories from one type of food isn’t the same as 50% of your dietary volume from that food (that is, how much space it takes up on your dinner plate). Meat and other animal products tend to be much more energy-dense relative to most plant foods (for an extreme example, one cup of beef steak has 338 calories, whereas one cup of raw spinach has only 7 calories!). That means that a meal containing an assortment of vegetables, plus a smaller portion of meat, fish, or eggs could easily come out to be a 50/50 ratio of calories from plants versus animals—even though it looks like more plant foods to the naked eye. Tricky, eh?

So, what does that mean for how you should plan your diet? Although both plants and animals can vary in their energy density (bone marrow is more dense than chicken breast, and a sweet potato is more dense than broccoli), it’s typically safe to say that if you aim for a diet of approximately 50% plants and 50% animals, the plants will take up more visual space in each meal and the animal foods will take up less—typically on the order of plant foods taking up 2/3 to 3/4 of your plate.

But, the last thing I want you to do is haul around a calculator every time you eat in order get the 50-50 ratio exactly right. Keep in mind, indigenous populations have stayed healthy on a wide spectrum of plant-to-animal-food ratios (as well as macronutrient ratios, which I wrote about here!). It’s only at the extremes that things get sketchy. Even if your ratio ends up being closer to 25/75 or 75/25 or if it varies fairly wildly between those two day by day, you’ll probably be just fine as long as you’re choosing from high-quality, nutrient-rich foods. Which brings us to…

Nutrients: Getting The Best of Both Kingdoms (Plant and Animal!) 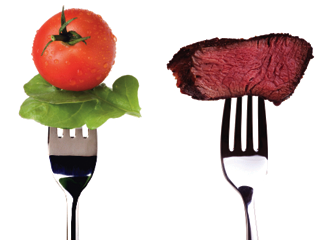 When it comes to our omnivorous diet, keep in mind that we get different nutritional needs met through animal foods versus plants. It’s not a competition between these two kingdoms, where one is “better” or “worse” than the other; both play a distinct but equally valuable role! In fact, there’s a huge spectrum of micronutrients and other beneficial compounds found mostly or exclusively in either plant foods or animal foods, such as:

With that in mind, how can we choose a diet that gives us the best nutritional bang for the buck (and, y’know, helps protect us from chronic disease, maximizes our chances of having a long and healthy life, makes us feel awesome, and tastes delicious to boot)? We already know that the Western diet is abysmally low in micronutrients (especially compared to other primates and human populations eating wild foods instead of heavily processed storebought fare).

A good rule of thumb is to eat abundantly from the most micronutrient-rich foods of both plant and animal origin. While the idea of sticking with “whole foods” is a great guideline, there are definitely some standouts in the food world that can take an omnivorous diet to the next level:

Add these to a menu already rich in nutrient-dense whole foods (quality meats, other colorful vegetables, glycine-rich foods like bone broth, fruit, quality fats, starchy roots and tubers), and you’ll have an omnivorous diet that gets the best of both the plant and animal kingdoms, supporting your health in the process. As long as you don’t veer too far towards all-plants or all-animals, your micronutrient and macronutrient bases should be easily covered!

Remember, being an omnivore means being able to benefit from everything nature provides—whether it came from a plant or an animal (er, or insect!). It’s all about making wise choices within the giant spectrum of foods that the “omnivore” umbrella allows.

So, although the “are we herbivores, carnivores, or omnivores?” issue is obviously a hot topic, it should be clear by now that we can truly put the question to rest. Every scientific avenue leads to the conclusion that we’re omnivores—whether we approach it from an evolutionary angle, an ethnographic one, or comparative anatomy and physiology.

Perhaps the better label is the word “nutrivore”, meaning that we choose foods based on their nutritive value, the quantity and quality of micronutrients they provide, and aiming for diversity of nutrients in order to get the full complement of nutrients that our bodies need to thrive. And guess what? The Paleo Diet—especially one that embraces seafood, organ meat, and large portions of veggies—is a nutrients-first approach consistent with all of this evidence!