Want to see a debate more heated than politics or religion? Just ask a group of health-conscious people whether humans are natural herbivores, carnivores, or omnivores, and watch the fireworks begin! 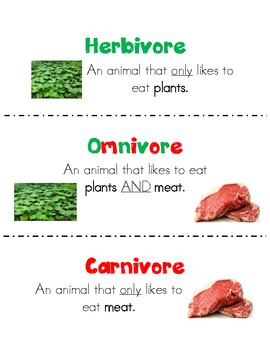 The subject of whether humans are naturally suited for plant-only diets or meat-only diets (or something in between) has been the source of ongoing controversy and some very strong opinions. You’ve probably come across seemingly convincing arguments in support of every one of those positions, citing things like digestive anatomy, dental structure, and human history as reasons we’re herbivores… or carnivores… or omnivores! Confusing, right? For example, the Vegsource website claims we’re anatomical herbivores because of the amylase content of our saliva, our stomach size and shape, and our dental features (among other things), while Barry Groves of the Second Opinions website claims we must be carnivores because of our physiology, historical fossil evidence, and digestive activity (among other things)[I’ve heard these arguments among Paleo circles recently, the major impetus for me writing this series of articles]. And then we have Tom Billings of the BeyondVeg website claiming we must be omnivores due to our conversion and synthesis (or lack thereof) of certain nutrients, comparative anatomy of the human gut, and lack of any vegan “gatherer” tribes.

The problem is, the justifications for each position sound convincing on the surface, but don’t always hold water when we look at them more closely. So, in this series of posts, I’ll be examining the issue of the “natural” human diet from a variety of scientific angles—using human evolutionary history and clues from hunter-gatherers (this article), comparative anatomy and human physiology (upcoming article)—and then piecing it all together to see what conclusions we can draw from the available evidence (upcoming article).

This is the first article I’ve ever written that really dives into detailed evolutionary biology, archeology and anthropology. I approach the Paleo diet from a biological and physiological point of view—I want to understand how the components of individual foods interact with our bodies at the cellular and molecular level to either foster or undermine health. To me, understanding what our Paleolithic ancestors ate and attributing their good health to their diet is not sufficient to prove that the Paleo diet is a superior approach to nutrition. Instead, I see understanding ancestral diets as the hypothesis—the proof is found in the tens of thousands of scientific studies that elucidate the roles of essential and nonessential nutrients in the human body, explain how functional compounds in our foods add to our health, and show that certain compounds in foods can be major problems for our health by causing inflammation, disruption hormones, or damaging the gut. When you evaluate food in this lens, you come up with the same thing: the healthiest diet is composed of seafood, high quality meats, vegetables galore, fruits, eggs, nuts and seeds.

But the question of whether humans are meant to be herbivores or carnivores or some shade of omnivore in between is a very different question than what is the optimal human diet, although clearly these two concepts are related. And I think that in this case, a great deal of insight can be gleaned from looking at the evolution of man and at modern and historically-studied hunter-gatherer populations. Not to mention the fact that this is the source of so much misinformation on the subject! I will, of course, be rounding out this information with some comparative anatomy and physiology (and more myth busting) in my next article in this series, but for now, let’s start at the beginning… the beginning of man.

The Human Diet: A Timeline

Although there’s no good reason to throw on a loincloth and try to replicate everything our early ancestors did, studying what they ate (and how their diet shifted over the course of thousands or millions of years) can tell us a lot about the forces that shaped our genome and established our nutritional needs.

So, scientists can gauge the proportion of C3 versus C4 plants that early humans ate by looking at different carbon measurements in fossil remains. Eating animals that consume C4 plants, like grass-grazing ruminants, can leave a carbon signature similar to eating C4 plants directly—so scientists have to use other methods to get a sense of whether the carbon came from plant or animal foods. Some of those methods include looking at nitrogen isotopes, which tell us about protein intake; examining archeological sites for tools and food remains; analyzing dental wear and tooth structure; and studying fossilized feces, called coprolites.

Carbon and nitrogen isotope analysis can also help differentiate between land-based and marine protein sources, legume and non-legume foods, and whether any animals consumed were herbivores or carnivores. I won’t pretend to understand all the detailed methodology that goes into this fascinating branch of science, but it does trigger my geek-dar pretty intensely! From these methods, scientists can paint a pretty decent picture of what our ancestors’ diets looked like, and how their eating patterns changed over the course of history:

What an amazing journey! But, what can we take away from all of that in terms of establishing whether humans are natural herbivores, carnivores, or omnivores?

The Gut Health Cookbook puts theory into practice with 180+ delicious recipes that each center on at least one of 60 gut health superfood ingredients.

Save $10 with the Gut Health Collection!

For one, we can see that meat-eating has been a component of the human diet (and that of our pre-human ancestors) for at least 2.5 million years. And, even before that, it’s likely that our ancestors ate a diet similar to that of modern chimpanzees and other higher primates—which aren’t exactly dripping with steaks and bacon, but definitely aren’t fully herbivorous either (since nonhuman primates love munching on insects and other invertebrates, and some species, like chimps, actually do hunt). We’ll be taking more clues from primate diets and anatomy in the next installment of this series! For now, we can say that humans have never been an herbivorous species, and as best we can tell from existing evidence, neither have the ancestors we descended from.

But, at the same time, we can see that plant foods have also played an important and sustained role throughout our past. The gut shrinkage we saw with Homo erectus limited our ability to derive energy from seriously tough plant matter (like stems and twigs), but we still have colons chock full of bacteria that love fiber and other plant components, and for no extended period in history did we appear to eat animal foods exclusively. A carnivorous past? Not likely! In fact, one theory for the change in brain and gut size we saw with Homo erectus has to do with eating more starchy plant foods, especially in the form of underground storage organs (USOs).

USOs: A Strike Against Carnivory

Nope, that’s not a typo for UFOs! Underground storage organs are starchy plant components like bulbs, tubers, rhizomes, and corms. They store water and carbohydrates for the plant to use, but are also a highly nutritious (and energy dense) source of food for humans. We’ve probably been gathering and consuming USOs since long before the dawn of agriculture, and they may have contributed to a significant plant-derived calorie intake even during the Paleolithic era.

Researcher Richard Wrangham is the leading voice for the theory that our crazy big brains and relatively small guts didn’t happen from eating more meat, but from eating more starchy USOs. And, the evidence behind that theory is pretty interesting. Changes in our dental shape coincided with a shift towards using USOs as a fallback food, and the ecology of USOs suggests they would have been plentiful in the environments that early humans inhabited. Homo fossils are often found near shallow-water or flooded habitats (where aquatic USO density is high), and where another brain-growth-spurring treat—aquatic creatures rich in DHA/omega-3 fats—frequently live. Collectively, that evidence suggests that even if animal foods played a significant role in our past, the claim that “meat is what made us human” (and we’re therefore more aligned with carnivores) might not be so accurate!

Of course, until someone invents a time machine and we can peer directly into the distant past, we can’t know exactly what foods early humans ate and what proportions each type of food contributed to their diets. Our best evidence right now is still just an approximation. Luckily, that’s where modern hunter-gatherer and indigenous populations can come to the rescue! Although foods today aren’t necessarily the same ones that were available thousands of years ago, the diet patterns of modern hunter-gatherers can still tell us a lot about human food choices before the influence of agriculture—and help us understand where we fall on the herbivore-omnivore-carnivore spectrum. 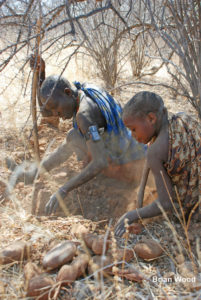 We’re fortunate to have data for a number of hunter-gatherer and indigenous populations before their diets became Westernized. Here’s a sampling of these diverse communities from around the globe!

Notice any common themes? How about the fact that every single one of these populations eats both plant and animal foods? As far as our evidence dictates, there aren’t any purely herbivorous human societies, and likewise, there aren’t any purely carnivorous ones. Even the populations that could make due with nothing but plant foods (like equatorial tribes) or nothing but animal foods (like arctic tribes) still seek out items from both the plant and animal kingdoms to eat on a regular basis.

And, what’s really notable is that none of these populations get the sorts of diseases and developmental problems we’d expect to see from eating a species-inappropriate diet (such as herbivorous rabbits getting mega cholesterol deposits in their skin and eyes from eating cholesterol-containing foods in scientific studies). It’s not until hunter-gatherer populations start encountering heavily processed modern foods that they end up with degenerative diseases like we see in industrialized nations!

So, what can we conclude from all this? Obviously, humans can survive on a wide range of diets: we’re awesome at making due with whatever the environment gives us and finding a way to subsist on that (or literally die trying!). But, the common denominator in the diets of our ancestors and the diets of modern hunter-gatherers is that contain both plant and animal foods, never exclusively one or the other, nor even dominant one or the other. There’s no evidence that humans, or our genetic ancestors, have ever been purely herbivorous or carnivorous. All signs point to omnivore.

But, there’s still more to the story (and the controversy!). What about human anatomy? What about all those arguments we see regarding our dental structure, digestive tract, stomach acidity, jaw shape, and so forth that seem to prove we’re actually herbivores or carnivores? Stay tuned: we’ll be exploring all that (and more) in the next installment of this series!

Masterjohn C. “The Masai Part II: A Glimpse of the Masai Diet at the Turn of the 20th Century — A Land of Milk and Honey, Bananas From Afar.” 13 September 2011.