The Link Between Gluten and Obesity 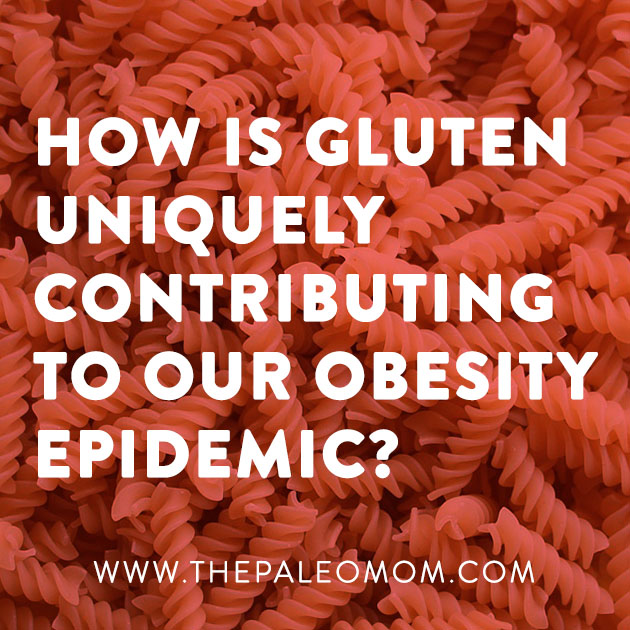 The idea that gluten could be harmful for more than just celiacs has been gaining traction lately, with studies confirming the existence of non-celiac gluten sensitivity, the ability for gluten to damage cells lining our guts, and a link between gluten exposure and leaky gut in susceptible individuals. Now, we have yet another reason to be wary of this lectin! An intriguing study in mice, published in 2016, offers the biggest clue yet for how gluten could uniquely be contributing to our obesity epidemic (you know, just in case damaging our gut isn’t reason enough to avoid it! See Why Grains Are Bad: Lectins and the Gut ).

The study, titled “Wheat gluten intake increases weight gain and adiposity associated with reduced thermogenesis and energy expenditure in an animal model of obesity,” investigated the effects of gluten on metabolism and fat storage. (Previously, the same team showed that mice fed gluten-free diets exhibited less weight gain than mice eating the same number of calories from gluten-containing foods.) Over the course of eight weeks, mice were fed one of four diets: a gluten-free control diet (with standard rodent chow), a gluten-free high fat diet (designed to produce obesity in mice), and the same two diets with 4.5% added gluten. (Although the researchers didn’t provide much detail on other elements of the diets, we should keep in mind that high-fat diets in rodent studies bear little resemblance to high-fat diets that humans eat: the rodent diets are typically composed of lard, casein, sugar, soybean oil, and other purified ingredients, rather than anything resembling whole food!) From there, the animals’ food intake, energy expenditure, and gluten absorption and distribution throughout the body were all monitored, with fat tissue changes measured after euthanization. 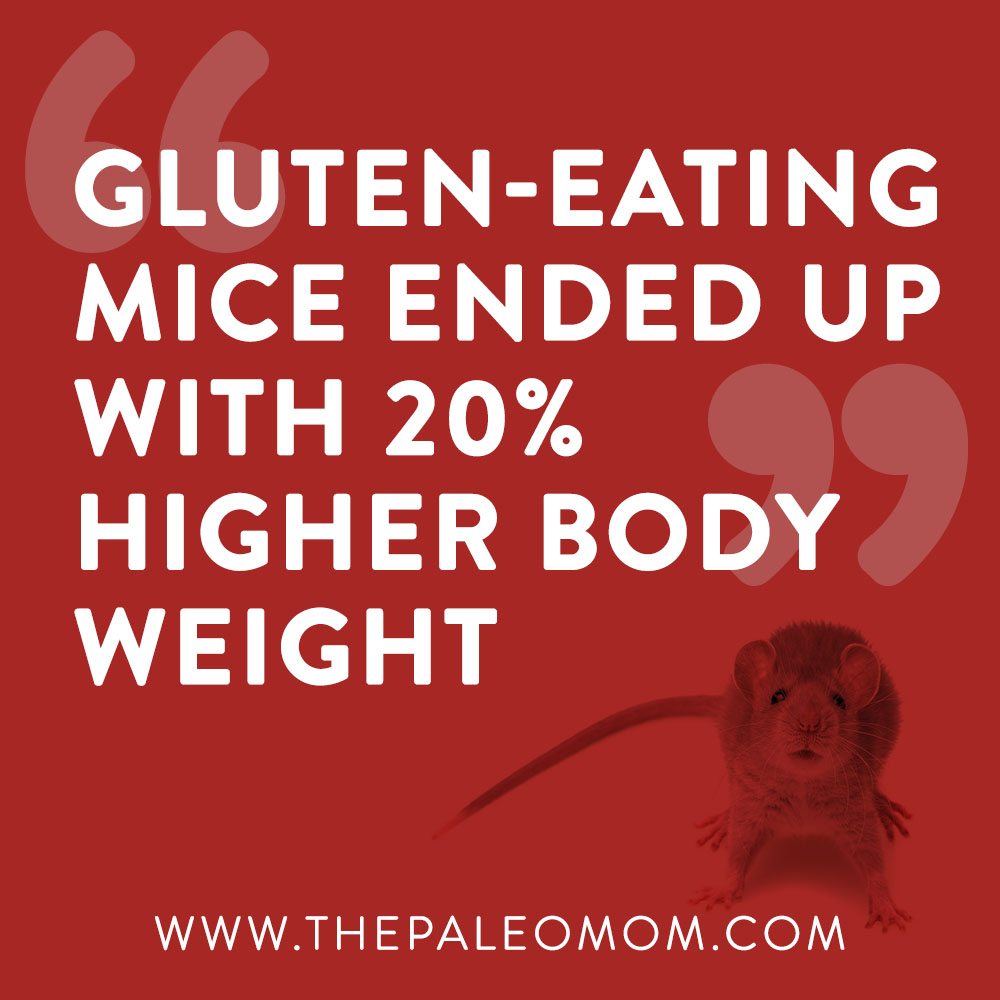 The results? As expected, the mice eating high-fat diets gained more weight than mice eating standard rodent chow. But, here’s where it gets interesting! Even though the addition of gluten didn’t alter the mice’s energy intakes, gluten-eating mice ended up with 20% higher body weight (and 30% higher fat depots in both visceral and abdominal tissue) than their respective controls.

Further analysis showed that gluten-eating mice had lower basal oxygen consumption in their fasting state (resulting in lower total energy expenditure), pro-obesity changes in certain thermogenesis-linked proteins in brown adipose tissue and subcutaneous adipose tissue (in particular, UCP1 and BMP7), and increased expression of the proinflammatory cytokines IL-6 and TNF than the mice eating standard chow, indicating a higher inflammatory profile. On top of that, radiolabeled gluten was found in the mice’s blood and peripheral organs (including liver and visceral fat), suggesting the potential for gluten to act directly on liver and fat tissue to induce harmful changes in cell metabolism. 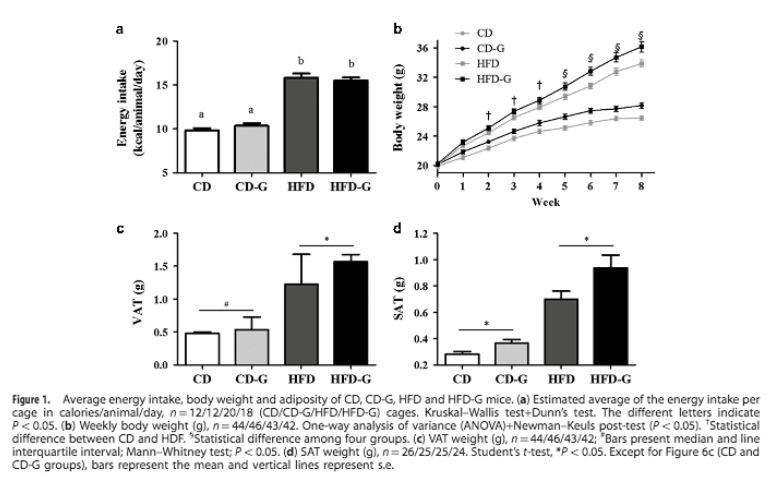 It’s worth emphasizing here that this study confirms gluten’s ability to cross mammalian gut barriers and enter the body without genetic predisposition.  I wrote about the known mechanisms through which gluten (or more specifically, gliadin fragments) can enter the human body in great detail in The Paleo Approach and summarized them in Why Grains Are Bad: Lectins and the Gut.  And while certain mechanisms appear certainly appear to require a genetic factor (like the increased zonulin production seen in celiacs and others with DQ2 and DQ8 variants of the HLA gene), there are several ways in which gluten appears to be able to enter all of our bodies, at least to some degree.  However, it remains unknown how much gluten can pass through a healthy human gut and exactly what role it might play once inside the body.  This paper does give us a clue though: the sequestering of radiolabeled gluten in liver and fat tissues strongly suggests binding with a receptor.  The authors of this paper postulate that receptor-binding is what triggers the metabolic changes conducive to weight gain and their research will now focus on this line of investigation to improve our understanding of exactly how gluten is affecting liver cells and fat cells.

While we can’t extrapolate the results of a rodent study directly to humans (that’s what controlled clinical trials are for!), this study explains—for the first time—some mechanisms that could underlie a link between gluten and obesity. And, it’s very possible that those mechanisms are relevant to us.

For one, the mice’s gluten intake (4.5% of their diet by weight) is high, but a human eating a wheat-based diet could feasibly reach that same intake. So, the mice’s gluten exposure is similar to what some people face on a daily basis. We know from previous research that gluten can increase intestinal permeability in both celiac and non-celiac individuals, so it’s not outside the realm of possibility that gluten peptides could enter circulation, travel to peripheral tissues, and influence gene expression in cells in ways that promote fat gain in humans (which happened with the mice).

Other mechanisms uncovered in this study (such as the effect of gluten on proteins in brown fat and subcutaneous fat) could play out differently in humans, who have proportionately less brown fat than mice, as well as genetic differences in gene expression in various types of fat tissue. Whether gluten decreases energy expenditure as dramatically in humans as it does in mice requires further research to determine. And, considering the fact that the high-fat-diet mice in this study tended to react more dramatically to gluten than the standard-chow mice, dietary context might play an important role in how gluten interacts with animal bodies—which raises even more questions for future studies to tackle. 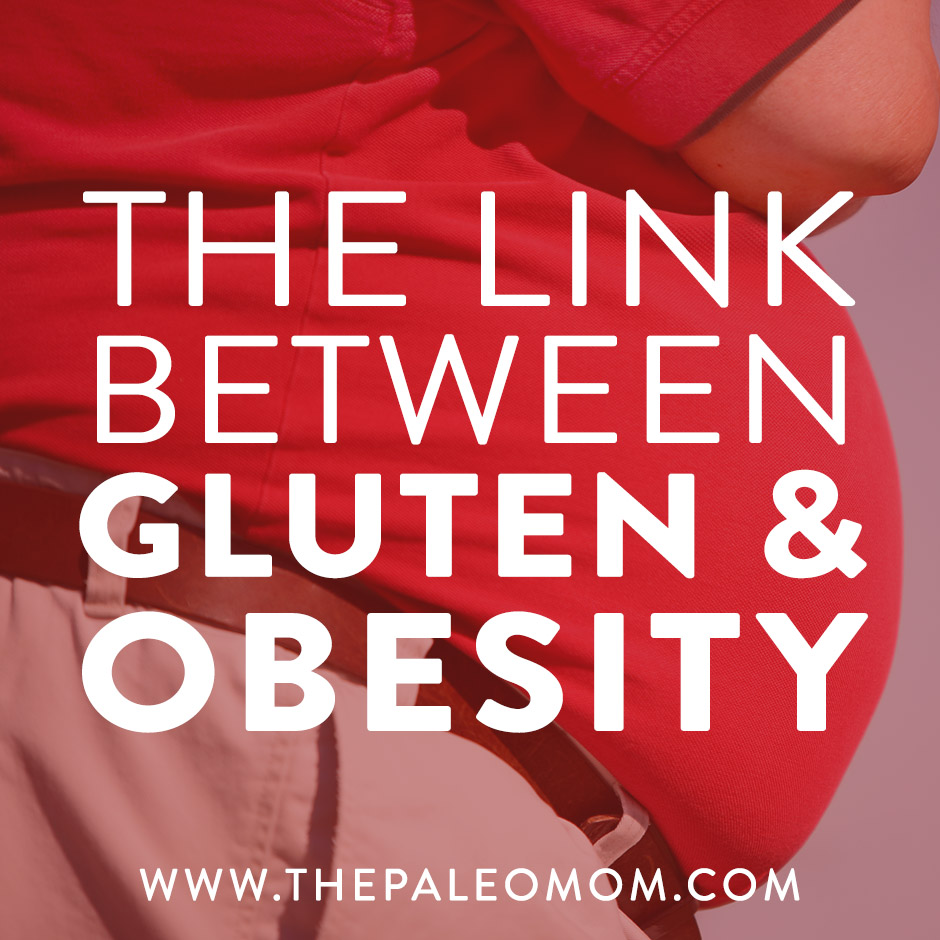 Bottom line? For the one in 133 people who have celiac disease, avoiding gluten is a no-brainer. It may even be a no-brainer for the estimated 55% of us with HLA-DQ2 or HLA-DQ8 (see Gluten Cross-Reactivity: How your body can still think you’re eating gluten even after giving it up).  But, for everyone else, the evidence against gluten is also mounting. Interactions between gluten, different components of our diet, and human genes point to a potentially harmful effect of gluten on gut health, immunity, inflammation, and fat regulation, even in otherwise healthy people. There’s no nutrient in gluten-containing foods that can’t be obtained (typically in much higher levels! See Gluten-Free Diets Can Be Healthy for Kids) from nutrient-dense plant and animal foods on a Paleo diet.