Far from a newcomer on the menu, salt has been mined (and cherished) for thousands of years across the globe. It was once so valuable that the Roman legions were paid with it (hence the word salary, which comes from the word salt!). In fact, we could even argue that salt made modern civilization possible: it gave us the ability to preserve food without refrigeration—allowing us to store (and trade) perishable items, prevent meat from rotting, travel long distances with a secure food supply, and release our dependence on seasonal eating. That’s a pretty impressive résumé for one little ionic compound, right?  Salt, in moderation, is perfectly Paleo!  See Is Salt Paleo? 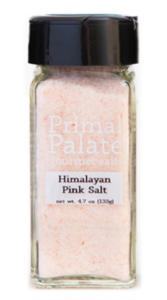 Himalayan pink salt is an unrefined salt that contains trace amounts of 84 minerals including magnesium, calcium, potassium, and dozens of others. Compared to the diet of hunter-gatherers (both ancient and currently existing), the standard American diet has far fewer micronutrients in it. Unrefined salt can be beneficial because of the trace minerals that it provides, allowing us to have a balance of micronutrients that is more optimal for health.

One of the reasons why we love unprocessed salt is that it doesn’t just pack a punch, micronutrient-wise, but it allows us to avoid some of the consequences of industrial processing. Table salt is sodium chloride that is oftentimes fortified with iodine (the result of public health efforts to reduce goiters, in part because we only need a trace amount of iodine to be functional). Avoiding white table salt is pretty commonplace in the Paleo community, but not because of this fortification; rather, it’s problematic that aluminum-based compounds are used as anti-caking agents in these salt products. Opting for Himalayan pink salt allows us to opt out of these additives while getting even more nutrition in our Paleo diet! Woot!

You can find Himalayan pink salt in the spice aisle of the grocery store. You can also order it from Amazon or you can grab it (along with some of my other favorite amazing spices) from Primal Palate.