You are here: Home / Nutrition / Development of Immune Intolerance in Children 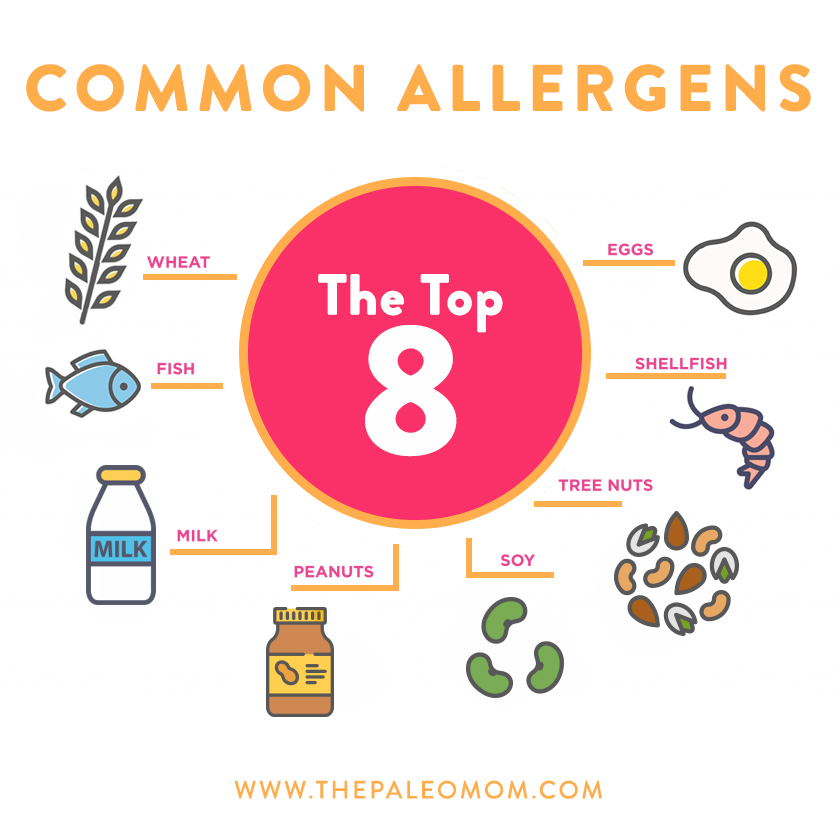 Immune tolerance (sometimes called immunotolerance or immunological tolerance) is a situation in which the immune system “tolerates” an antigen—meaning that it doesn’t mount an immune response against something that’s capable of inducing one. For example, under normal circumstances, our bodies are tolerant of self-antigens so that our immune system doesn’t attack our own tissues and cells. (When we lose tolerance to self-antigens, autoimmune disease occurs!) Encompassing a range of physiological mechanisms, immune tolerance is why a mother’s body doesn’t attack a fetus, why we can suffer chronic infections, and why we can grow out of allergies. And, immune tolerance is heavily involved in how we react (or don’t react!) to the foods we eat. When it comes to allergenic foods, immune tolerance means that we have no symptoms of a reaction when we consume those foods. With a lack of oral immune tolerance comes food allergy!

Immune tolerance during childhood is a particularly hot topic. Many of us have heard from medical professionals that it’s important to feed our babies the most common allergenic foods (typically wheat, fish, shellfish, peanuts, tree nuts, dairy, eggs, and soy), under the belief that introducing these foods early on will increase the odds of developing an immune tolerance to them. But, is this advice sound? Does it work? And, is immune tolerance even worth it when it comes to foods that aren’t making positive contributions to our diet and health (wheat, I’m looking at you!)? In this post, we’ll look at immune tolerance as it relates to children (don’t worry; adults are up next!).

What Does the Science Say?

A number of studies have been conducted to test the timing of food introduction on subsequent allergy development in children. One of the most recent is called the LEAP study (which stands for Learning Early About Peanut allergy). The LEAP study assessed whether regularly eating peanuts at an early age (4 to 11 months old) in high-risk babies (those with severe eczema and/or egg allergy) could affect the rate of peanut allergy once those kids were 5 years old. Babies were tested for peanut allergy at the beginning of the study and then randomly assigned to either a peanut avoidance group or a peanut consumption group, where they were given at least three peanut-containing meals each week containing a total of 6 grams of peanut protein weekly (the equivalent of about 7.5 dry-roasted peanuts).

The results were dramatic! In the babies who didn’t test positive for peanut allergy at the beginning of the study, regular peanut consumption was associated with an 86% decrease in peanut allergy at age 5. In the babies who did test positive, regular peanut consumption led to a 70% reduction in peanut allergy at age 5. This means that early and regular consumption of peanuts increased the probability of developing immune tolerance to peanuts substantially. In fact, these results (and supportive data from other studies) have led to a major shift in recommendations for when to introduce allergenic foods to babies, even in those with a high risk of food allergies.

Additional studies have found similar results with other common allergens. For example, a randomized controlled trial studied infants who were fed either 1 teaspoon of egg powder (equivalent to 1/6th of an egg) or rice powder (as a control group) on a daily basis between the ages of 4 to 8 months. At the 12-month mark (and excluding the infants who had to discontinue the study due to already-existing egg allergy), the egg group had a lower proportion of infants who had developed an egg allergy (although due to limitations of sample size, the result didn’t reach statistical significance).

Another randomized trial from 2016 also sheds light on the link between first-food introduction timing and subsequent allergy development. In this study, 1303 exclusively breast-fed infants (aged 3 months at the study’s start) were randomly assigned to either a standard-introduction group (exclusive breast-feeding until 6 months of age) or an early-introduction group (where six allergenic foods were introduced: peanut, sesame, wheat, cooked egg, cow’s milk, and fish). The researchers then observed how many children in each group developed allergies to one or more of those foods between the ages of 1 and 3 years. In the per-protocol analysis (looking only at the infants who completed the protocol as planned), 2.4% of the early-introduction group developed food allergies, compared to 7.3% of the standard-introduction group. Those numbers were mostly driven by peanut allergies and egg allergies: none of the between-group differences for milk, sesame, fish, or wheat reached statistical significance. 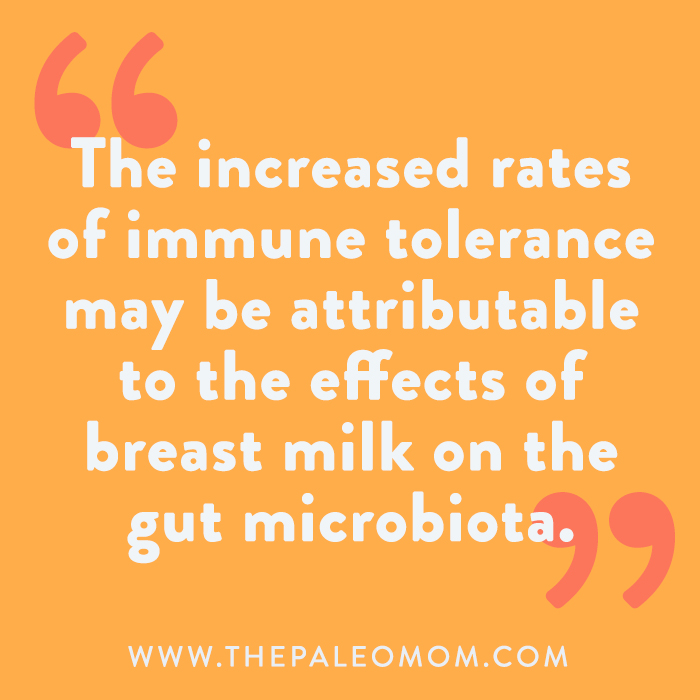 So, does this mean immune tolerance is all about early food introduction? Not so fast! We should note that breastfeeding is a major factor here as well. By shifting the introduction of allergenic foods to a much earlier age, a higher percentage of kids are being exposed to these foods while still breastfeeding. A very recent review (February 2018) highlighted the potential importance of maternal dietary proteins found in amniotic fluid, cord blood, and human milk, which help train the infant’s immune responses to the same types of proteins they encounter from food. And, the increased rates of immune tolerance may be attributable to the effects of breast milk on the gut microbiota. Studies show that breastfeeding is important for the establishment and growth of normal gut microorganisms, and these are important regulators of the immune system. In particular, breast milk contains probiotics, and for the duration of breastfeeding, the guts of babies are being constantly inoculated with these beneficial bacteria!

Get personalized guidance and support from Dr. Sarah in this 6-week interactive online course! 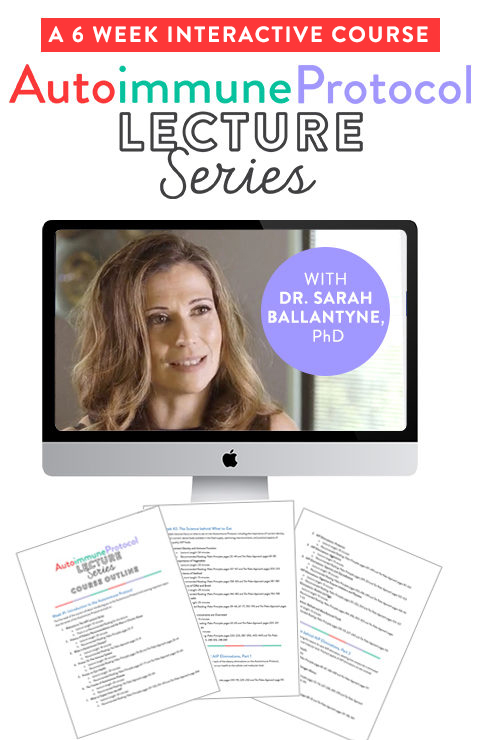 As one example of how breastfeeding seems to be an important variable, one study of celiac disease development looked at two cohorts of Swedish 12-year-olds. The first was a group born in 1993 during an epidemic of celiac disease (believed to result from changes in government recommendations for the age of gluten introduction to 6 months old, combined with a concurrent increase in the gluten content of baby foods), and the second was a group born in 1997 after the epidemic (after the government revised the guidelines to lower the age of gluten introduction to 4 months, and the amount of gluten in baby foods was reduced). The study sought to determine the impact of breastfeeding in relation to gluten introduction on the future development of celiac disease. 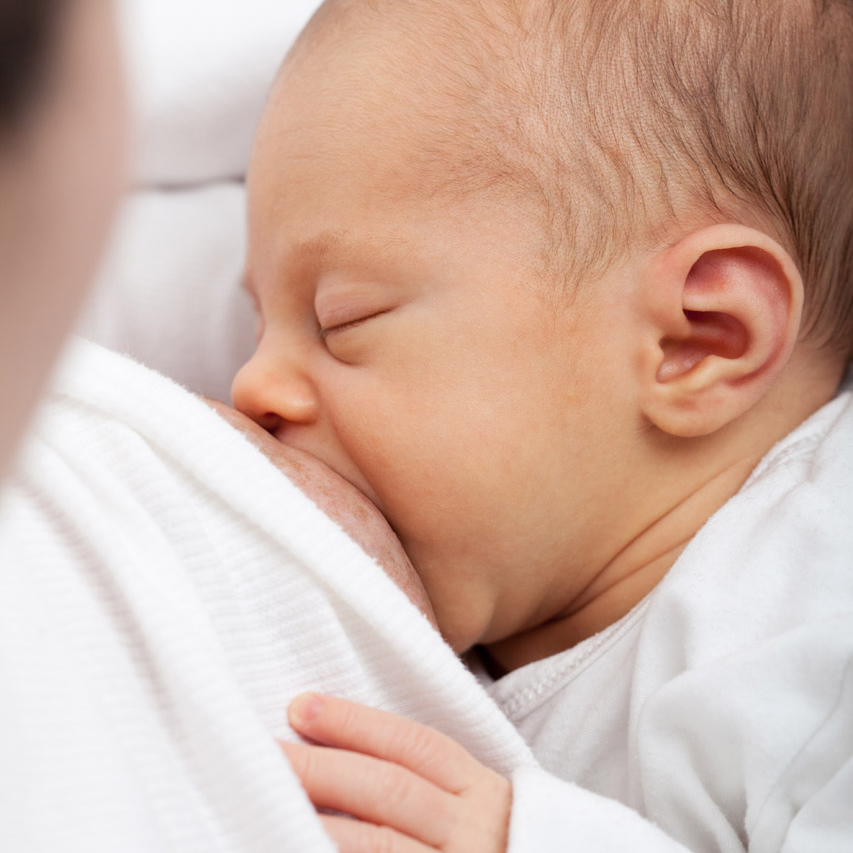 These findings still raise the question: is it immunoactive compounds in breast milk or breast milk’s beneficial effects on the gut microbiota that mediate the development of immune tolerance? If breastfeeding is protective because of its probiotic effects, then it could be that it doesn’t matter when allergenic foods are introduced (if ever), as long as the gut is healthy when the introduction occurs. As a matter of fact, the latest research is showing that the microbiota trajectory in infants does show distinct associations with the development of celiac disease after 5-year follow-up (celiac-prone infants have lower bacterial diversity and a lack of increase in Firmicutes families over time, as well as increases in Bifidobacterium breve and Enterococcus spp., whereas infants who don’t develop celiac disease show development of greater bacterial diversity and higher levels of Bifidobacterium longum). We also know that HLA-DQ genotype (determining susceptibility to celiac disease) influences the microbiome composition of infants, with HLA-DQ2 carriers having significantly higher proportions of Firmicutes and Proteobacteria and lower proportions of Actinobacteria compared with non-carriers (and at the genus level, having significantly lower proportions of Bifidobacterium and unclassified Bifidobacteriaceae, and higher proportions of Corynebacterium, Gemella, Clostridium sensu stricto, unclassified Clostridiaceae, unclassified Enterobacteriaceae, and Raoultella). In 2012, the PROFICEL study found that breast-feeding (compared to formula-feeding) reduced the differences in microbiome composition seen between HLA-DQ2/8-carrying infants versus noncarriers (including supplying important species of Bifidobacterium), suggesting that breast-feeding might help normalize the gut microbiome to help prevent celiac disease from developing! More research on this fascinating topic is needed to help us understand the interplay of breast-feeding, microbiota, and intolerance to other allergenic foods.

Is Immune Tolerance Worth It?

Unfortunately, there are still many unanswered questions about promoting immune tolerance to allergenic foods in children. It could be argued that immune tolerance isn’t even desirable if the food in question is empty calories replete with problematic compounds. It could also be argued that the promotion of a healthy gut trumps the introduction of foods that may undermine gut barrier or microbiota health, like gluten-containing grains. And, if we do want to promote immune tolerance to the top eight allergenic foods, a definitive protocol hasn’t been established! 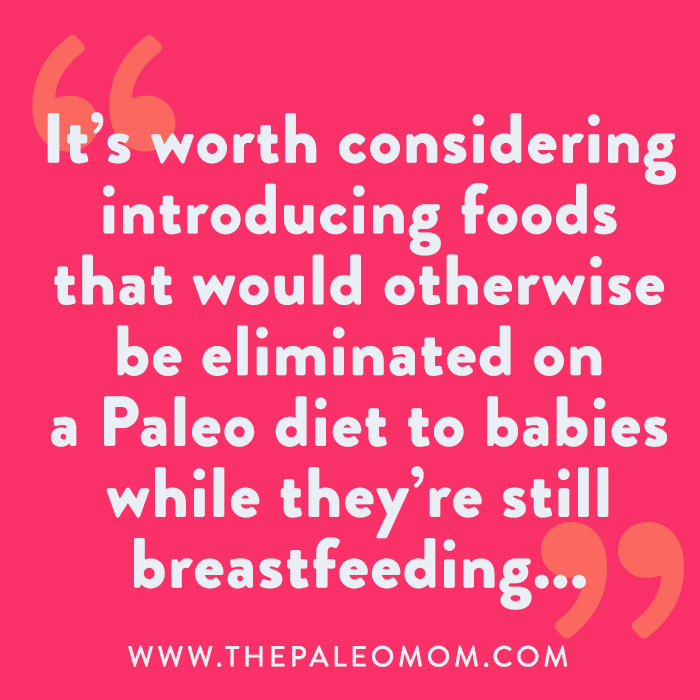 But, it’s worth considering introducing foods that would otherwise be eliminated on a Paleo diet to babies while they’re still breastfeeding and in the context of an otherwise nutrient-dense and anti-inflammatory diet, with a few very small serving per week of those foods with the highest rates of allergy and sensitivity. Developing immune tolerance to common foods could be beneficial to protect against accidental or occasional exposure in life (let’s face it, it’s nearly impossible to have 100% adherence to any particular diet forever!). Because this is an area of active research and few definitive answers, the decision must be an individual one!

And that leads us to the question… what about adults?! Can we lose immune tolerance after eliminating allergenic foods for extended periods of time (such as while eating strict Paleo or AIP)? Should we make a special effort to expose ourselves to allergenic foods to avoid a loss of tolerance? Stay tuned for the next post on this topic to find out!