You are here: Home / Autoimmunity / Why Aren’t Humans Adapted to Grains?

A Paleo diet is often presented as “eating the foods that humans evolved over 2.5 million years to eat for optimum health”.  I am guilty of presenting this explanation myself.  It’s an easy sound bite and resonates on an intuitive level for the scientifically-inclined.  However, this easy definition of the Paleo diet renders the entire diet vulnerable to a common criticism.  While we claim that humans are not adapted to those foods that only became a part of our diet with the advent of agriculture, (specifically grains, legumes and dairy), many refute this claim (and provide scientific evidence of adaptations!).  While the sometimes vehement debates over the merits of a Paleo diet are moot to most of us (we know it works for us and that’s enough!), this criticism of what many people think of as a cornerstone of the Paleo diet is absolutely valid.

The speed in which a species adapts to a change in environment (which might include anything from predators, to weather, to food sources) depends on something called evolutionary pressure.  Any factors that reduce reproductive success in a proportion of a population influence the genetics of that population–this is evolutionary pressure.  This pressure “selects” for certain genetic traits that increase survival of the species.  Survival, in this case, means health of the individual sufficient to reproduce.  What happens after reproduction doesn’t exert pressure for genetic adaptation.

The period of time since the advent of agriculture is fairly short in terms of the length of time that humans have been evolving; however, it is absolutely enough time to adapt given sufficient evolutionary pressure.  Dairy consumption is an excellent example of a way in which humans (at least a proportion of them) have adapted to a new food source over a short period of time.  Lactose tolerance and lactose persistence (ability to still digest lactose as an adult) is present in 80% of humans of European and American descent, which means that 80% of European and American individuals contain the genes for the enzyme lactase.  These people are descendants of lines in which adaptation has occurred (in conjunction with dairy consumption, which might be why this adaptation has not occurred to such a high degree in other cultures) 1.  If humans continue to consume dairy products, the percentage of people who contain the gene for lactase will gradually increase until everyone is lactose tolerant and lactose persistent.  Dairy may still not be an optimal food (casein is highly allergenic; milk contains protease inhibitors), but this adaptation is the chief reason why the exclusion of dairy from the Paleo diet is so contentious (especially when considering raw, grass-fed dairy).  Indeed, the scientific literature is divided between studies showing that milk is beneficial for our health versus detrimental for our health (for a great summary of this argument see http://chriskresser.com/dairy-food-of-the-gods-or-neolithic-agent-of-disease).

The same process of adaptation is happening as we speak with regards to grains.  For example, since the advent of agriculture, humans have increased the number copies of the genes for salivary amylase, the enzyme in our saliva that starts the digestion of starch as we eat 2.  However, the scientific literature has more conclusively established a link between the dietary lectins found in grains, especially gluten, and a huge variety of health conditions (see The Paleo Answer

).  The incidence of celiac disease and gluten-sensitivity is increasing (and some studies predict that they are still very underdiagnosed) 3,4.  There is a growing body of scientific literature linking gluten sensitivity to autoimmune disease 5,6.  Yes, there is genetic adaptation, but human health is still indisputably negatively affected by consumption of grains.  Gluten likely causes the telltale damage to the gut lining seen in celiac disease at least to some degree in most individuals (obviously, there is huge variability here).  Once study author wrote “If you look for coeliac disease you will find it” 4.

It’s not that humans haven’t adapted to eating grains; it’s that humans haven’t fully adapted to eating grains. Evolutionary pressure is relatively low because the health effects of grain consumption doesn’t change reproduction rates dramatically.  However, it is very likely that there are people out there who are carrying a set of genetics that does make them adapted to eating grains.  This is why when someone tells me that they are completely healthy no matter what they eat, I simply congratulate them.  They may be adapted to Neolithic foods (they might also be even healthier on a Paleo diet, but they aren’t likely to try it if they feel so great now, so I don’t belabor the point).  And, given enough time, humans will adapt to eating grains and will eventually thrive on its consumption.  But you are not going to change your genetics.  If you are part of the majority of humans who do not carry complete genetic adaptations to grain consumption, you are better off without it.  Depending on where you are in the spectrum, you may never be able to tolerate even small amounts or you may be able to incorporate regular cheat meals into your diet with little harm.

The answer to this question is not straight forward.  10,000 years is insufficient time for humans to have fully adapted to this new food source.  Basically, humans are adapting but are not yet fully adapted.  So, you get to choose.  Do you want to eat a diet that you are not fully adapted to in the hopes that your genes will contribute to the eventual complete adaptation of our species to this diet?  Or do you want to live the healthiest life you can now? 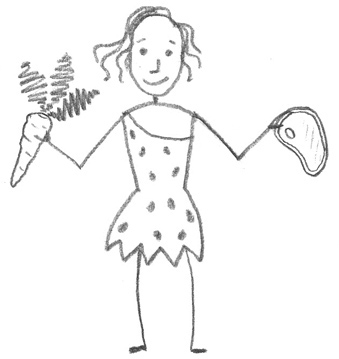