You are here: Home / Autoimmunity / The Link Between Gallbladder Disease and Gluten Sensitivity

Celiac disease is estimated to affect approximately 1 in every 100 people, but only 5% of these people receive a positive diagnosis 1.  This is, in part, because celiac disease often doesn’t present with what are thought of as the classic symptoms (abdominal pain, bloating, intermittent diarrhea, weight loss).  In fact, more often, celiac disease presents as a collection of symptoms that many physicians don’t associate with the disease (irritability or depression, anemia, stomach upset, joint pain, muscle cramps, skin rash, mouth sores, dental and bone disorders such as osteoporosis, neuropathy, and/or micronutrient deficiency) 2.  However, the recognition and understanding of celiac disease is improving and more and more people with the disease are receiving positive diagnoses.

The same is not so true of gluten sensitivity, which includes immune reactions that are currently tested for (IgE, IgG or IgA antibody formation against gluten), immune reactions that are not currently tested for (IgM antibody formation, T-cell activation and/or immune complex formation), and non-immune reactions (increased zonulin production and/or gut dysbiosis resulting from deficiency of appropriate digestive enzymes).  Gluten intolerance (where antibodies are formed against gluten) is thought to affect upwards of 20-40% of the general population 3-4.  There are no estimates of the percentage of people who are sensitive to gluten in other ways.  Genetic tests (HLA-DQ, DR, etc.) exist but it is still unknown if current genetic tests accurately identify all individuals who are gluten sensitive 4.

A wider and wider range of health issues are being linked to gluten sensitivity and/or celiac disease.  This is a positive development in medical research because it is starting to bring more focus on how detrimental these grain proteins are in the human diet.  One such health issue is gallbladder disease, although the link between gallbladder disease and gluten sensitivity/celiac disease has not permeated through the public knowledge.  Because so many people are unaware that their gallbladder problems might be linked to gluten in their diets, it seemed like a good idea to write a post about this topic! 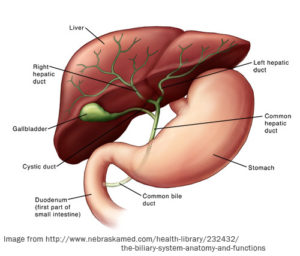 Let’s take a step backward and first talk about what exactly a gallbladder is.  The gallbladder is a little pear-shaped sac, nestled toward the front and a little underneath of the liver.  It has a very simple job:

Bile is composed of water, bile salts, bile pigments (products of red blood cell breakdown that are normally excreted in the bile), cholesterol, and various electrolytes.  Bile salts are the only components of bile that actually have a digestive function.  Bile salts are not the same as digestive enzymes (which are produced by the cells that line the stomach and by the pancreas).  Instead, bile salts aid the actions of digestive enzymes and enhance the absorption of fatty acids and fat-soluble vitamins.

The most important action of bile salts is that of an emulsifier.  In essence, bile salts break up fat globules in the small intestine into tiny droplets that are able to mix with water.  The enzymes that break fat up into fatty acids (lipases) can then perform their function more effectively.  Bile salts also aid in the absorption of fatty acids and cholesterol (some of the cholesterol released into the small intestine in the bile is reabsorbed).  Fat-soluble vitamins (such as A, D, E, K1 and K2) are also absorbed.

If the gallbladder is not functioning properly, fats cannot be properly digested (fats are essential for survival and health) and fat-soluble vitamins cannot be effectively absorbed, leading to micronutrient deficiencies.  Gallbladder health is critical for digestive health and overall health.

As is so often the case with research linking gluten sensitivity to other health complications, the research is strongest in the context of celiac disease.  Approximately 60% of celiac disease sufferers are known to have liver, gallbladder, and/or pancreatic conditions 5.  While some of these conditions may be a result of the malnutrition and/or directly linked to the gut damage that occurs in celiac disease, others are thought to share common genetic factors or have a common immunopathogenesis (i.e., the condition originates from the same immune system attacks on the small intestine also attacking these organs) 5.  Specifically, primary biliary cirrhosis, primary sclerosing cholangitis and autoimmune forms of hepatitis or cholangitis are thought to have a common immune system/inflammation origin as celiac disease itself—and that means gluten.

What does this mean?  In celiac disease (and in non-celiac gluten sensitivity, albeit to a lesser extent or perhaps just in a slightly different way), gluten triggers an autoimmune response.  The body’s own immune system attacks the cells that line the small intestine, resulting in the characteristic shortening or pruning of the intestinal villi (microscopic, finger-like projections of small intestine wall tissue made of columns of gut epithelial cells).  As you can imagine, this creates a very leaky gut, which also stimulates the immune system, causes inflammation, and allows toxins and foreign proteins into the body.  In the majority of celiac disease patients, the immune system does not limit its attack to the cells that line the small intestine.  This is why second and even third autoimmune conditions are so common in celiac disease.

When you eat, the cells that line the duodenum (the first segment of the small intestine) detect the presence of fat and protein and react by releasing a hormone called cholecystokinin.  This hormone stimulates both the release of digestive enzymes from the pancreas and bile from the gallbladder.  It also signals to the stomach to slow down the speed of digestion so the small intestine can effectively digest the fats.  When the gut is damaged (whether from celiac disease or other gut pathology), the cells that line the small intestine (called enterocytes or gut epithelial cells) are less able to secrete cholecystokinin.  This means there is not enough signal to the gallbladder that it’s time to release bile salts into the duodenum.  Reduced cholecystokinin release is reported in celiac disease and may be one of the key causes of the gallbladder malfunction that occurs concomitantly with celiac 6-8.

Importantly for this discussion, the dominant gallbladder symptoms that might be caused by gluten sensitivity is cholecystitis (inflammation of the gallbladder) or malfunctioning gallbladder, and not gall stones (reported in 20% of elderly celiac patients, but only 2.5% of the more general celiac population).    The frequency of liver and gallbladder conditions suffered by celiac disease patients has allowed researchers to make the converse argument.  It is now recommended that those with unexplained liver and/or gallbladder symptoms be evaluated for celiac disease 9-11.  If you have been diagnosed with gallbladder disease (especially if it is not gall stones, but don’t rule out this possibility if it is), it is important to investigate gluten sensitivity or celiac disease as the possible cause.  No one has yet studied how frequently someone with gallstones actually has undiagnosed celiac disease (or gluten sensitivity) and there is a feeling within the celiac community that this may actually be quite frequent.

What if you test negative for celiac disease and gluten intolerance?  Unless you had the DNA test done for gluten sensitivity, these tests actually are embarrassingly inaccurate in the sense that the false negative rate is very high (false negative means that you do have celiac but the test showed that you don’t).  There are a variety of ways that false negatives can occur and no one likes to put a number on just how likely they are.  But, if you remember from the beginning of this post, these tests generally only test for antibody formation (and a biopsy only looks at one very small piece of your small intestine).  The best way to be sure that gluten is not the problem is to eliminate it completely from your diet for several months (those with celiac disease can take up to 5 years to heal from the damage caused by gluten 12).  It is not enough to eliminate gluten however, as antibodies that your body may have formed against gluten may also recognize proteins in other foods.  This means that even if you aren’t eating any gluten, your body still thinks that it is (see this post for a complete explanation and list of foods to avoid).

The take home message?  There is a strong link between gallbladder health and celiac disease.  In fact, a failing gallbladder may be your first symptom of celiac disease.  Of course, I believe that a grain-free, legume-free, dairy-free, refined sugar-free, modern vegetable oil-free diet is optimal for our health in every way; however, if you are suffering from gallbladder problems, then I recommend addressing your diet as soon as possible.  The earlier you adopt an anti-inflammatory diet that prioritizes gut health, the more likely you are to save your gallbladder.