You are here: Home / Nutrition / The Hormones of Hunger

I want to delve into the effects of diet and lifestyle on hunger and satiety signals in a series of upcoming posts.  I am mostly interested in the hormone dysregulation that occurs during metabolic syndrome, but also in how to optimize diet, exercise, sleep and stress management to achieve an ideal weight.

The feeling of hunger is regulated by a complex system of hormones that interact with neurotransmitters and neurotransmitter receptors within the hypothalamus region of the brain.  These hormones essentially activate or deactivate specific neurons in the hypothalamus that control hunger.  These neurons have receptors to Neuropeptide Y (NPY), the essential neurotransmitter in regulating hunger.  The hormones can increase or decrease hunger either through binding the receptors for NPY or increasing or decreasing NPY itself.  Essentially a hormone will increase hunger if its expression activates these NPY neurons whereas you will feel satiated if a hormone’s expression deactivates the NPY neurons.  The interplay between these hormones and your brain is complex and only partially understood.  However, what scientists do know about these hormones can help inform our decisions and compulsions regarding diet and other lifestyle factors.

New hormones continue to be discovered and their roles in regulating appetite, satiety, metabolism and digestion continue to be studied.  As the full list of hunger hormones grows, understanding the complex interplay between these hormones, the types of food you eat, and the amount of muscle and fat on your body quickly becomes overwhelming.  I have tried to summarize the key players (at least as scientists currently understand them):

Cholecystokinin (CCK) is secreted by the cells that line the duodenum (the first segment of the small intestine) when they detect the presence of fat.  This causes the release of digestive enzymes from the pancreas and bile from the gallbladder.  Increased levels of CCK signals to the stomach to slow down the speed of digestion so the small intestine can effectively digest the fats.  CKK is also a neuropeptide similar to NPY and has a direct action on neurons in the brain to signal satiety.  This is the most immediate hunger suppressing signal and is the reason why eating fat with your meals is so important.

Oxyntomodulin is released in response to protein and carbohydrates in the stomach and signals a change in energy status to the brain.  Oxyntomodulin enhances digestion by delaying gastric emptying and decreasing gastric acid secretion.

Peptide YY (PYY) is released by cells that line the jejunum, ileum (the next two segments of the small intestine) and colon in response to feeding and is especially sensitive to protein.  PYY signals to the gallbladder and pancreas to stop producing digestive enzymes.  PYY is important in increasing the efficiency of digestion and nutrient absorption after meal by slowing down gastric emptying, slowing down the speed of digestion, and increasing water and electrolyte absorption in the colon.  PYY interacts directly with NPY receptors in the hypothalamus in an inhibitory fashion, thereby turning off hunger signals.

Glucagon-Like Peptide-1 (GLP-1) is secreted in the ileum in response to carbohydrate, protein and fat.  It rapidly enters the circulation and is one of the fastest and shortest-lived satiety signals.  It inhibits acid secretion and gastric emptying in the stomach.  GLP-1 also increases insulin secretion and decreases glucagon secretion.  GLP-1 decreases hunger signals by reducing the amount of NPY.

Leptin plays a key role in regulating energy intake and energy expenditure, including appetite and metabolism.  Leptin is released both by adipocytes (fat cells) and by the cells that line the stomach, so it signals both that the body is fed and that there is sufficient energy storage.  This appetite inhibition is long-term, in contrast to the rapid inhibition of eating by CCK and the slower suppression of hunger between meals mediated by PYY.  Leptin both rapidly inhibits NPY production and deactivates NPY neurons in the brain to signal that the body has had enough to eat, producing a feeling of satiety. It is one of the most important adipose derived hormones (read more in this post).

Adiponectin is secreted from adipose tissue into the bloodstream where it signals decreased gluconeogenesis (when the body converts fats and proteins into  glucose for energy), increased glucose uptake, lipid catabolism (breaking down of fats), triglyceride clearance (storage of fats), increased insulin sensitivity, and control of energy metabolism.  Adiponectin acts directly on NPY neurons similarly to leptin but with additive effects.

Ghrelin is considered the main hunger hormone.  It is secreted by the cells that line the stomach when the stomach is empty and also by the pancreas when it detects low blood sugar.  Also, the liver secretes ghrelin when its glycogen storage runs low (and glucagon is high).  When ghrelin is released into the circulation, it directly activates NPY neurons to stimulate appetite.  Increased levels of ghrelin are directly associated with the sensation of hunger. It is considered the counterpart of the hormone leptin.  Importantly, ghrelin is a potent stimulator of growth hormone (GH) secretion and regulates nutrient storage, thereby linking nutrient partitioning with growth and repair processes. Ghrelin activates several anti-inflammatory pathways in the body and promotes cell regeneration thereby promoting healing, especially within the gastrointestinal tract. Ghrelin regulates glucose homeostasis through a direct action on the pancreatic islet cells (the cells that secrete insulin).  It is also important for memory function and gastrointestinal motility.

Cortisol is well-known as a stress hormone, but it has key roles in regulating metabolism and hunger.  Cortisol levels determine whether the body uses glycogen stores or triglyceride stores for energy (stored carbohydrate or stored fat).  Cortisol can also stimulate gluconeogenesis, the process of converting amino acids (proteins) and lipids (fats) into glucose in the liver.  It is believed that cortisol directly influences food consumption by acting on NPY neurons in the brain as well as affecting the levels of NPY and leptin.  Cortisol seems to have a particular effect on the desire to eat foods high in fat and sugar.  This is why stress management (which really means controlling any factor that might mess with your natural cortisol levels) is so important.

Glucagon is a hormone secreted by the pancreas when it detects low blood glucose levels (typically between meals, but this can also happen as part of that “sugar crash” after eating something very high carbohydrate).  Glucagon signals the liver to convert stored glycogen into glucose, which is released into the bloodstream, a process known as glycogenolysis.  When glycogen stores are low, high glucagon levels drive gluconeogenesis, the process of creating glucose from amino acids and fatty acids.  Increased glucagon amplifies the hunger sensation.

Insulin is secreted by the pancreas in reaction to high blood glucose levels (for more on insulin, see this post).  Insulin causes cells in the liver, muscle, and fat tissue to take up glucose (and fatty acids in the case of adipocytes) from the blood, storing it as glycogen.  While insulin is released as a result of eating carbohydrates, it paradoxically increases hunger as opposed to decreasing it.  This is caused by direct action on the NPY neurons and is the reason why eating a carbohydrate-rich meal is not as satiating as eating a meal that includes fats and proteins.  It also explains how quickly we feel hungry again after a high-sugar snack.

These hormones have important roles both in regulating aspects of digestion and signaling to the brain whether or not you need to eat.  Many of these hormones are also critical in regulating your blood sugar both after a meal and between meals (fed and fasted states).  Some of these hormones also affect other systems in the body, for example, interacting with the immune system and controlling inflammation.  Understanding how your diet and lifestyle affect these hormones will help you make choices that regulate these hormones properly, allowing yourself to listen to your hunger cues and trust that your body knows what it’s doing.  And regulating hunger hormones is a key part of healing and being healthy. 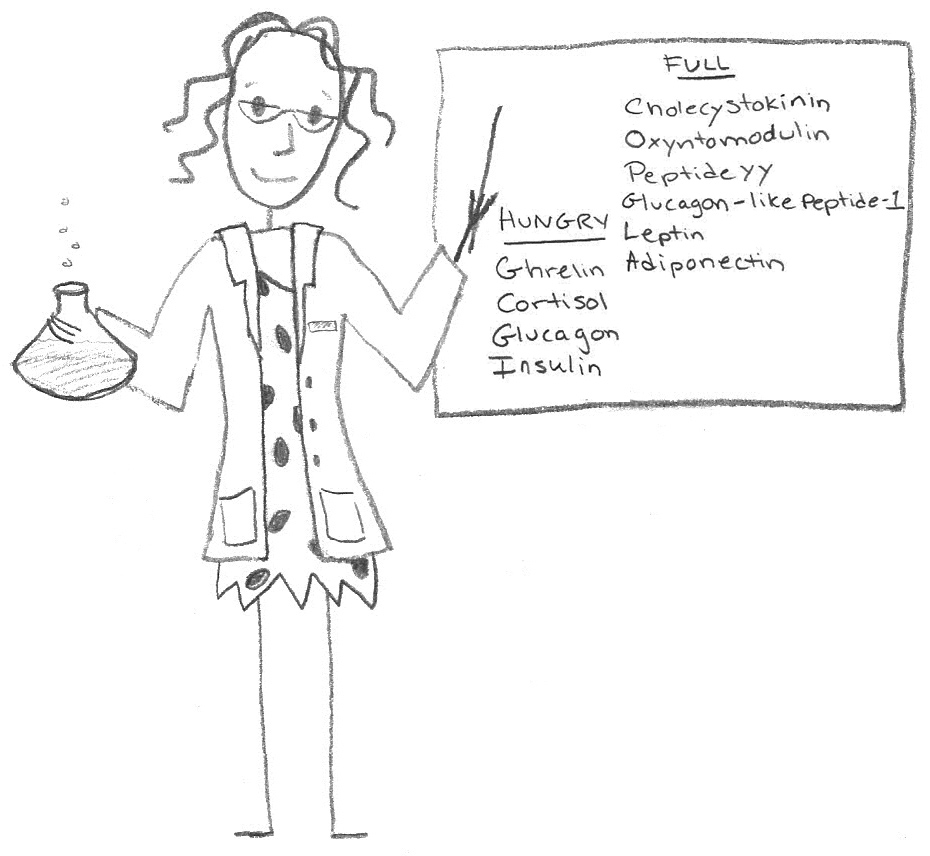