The Health Benefits of Ginger 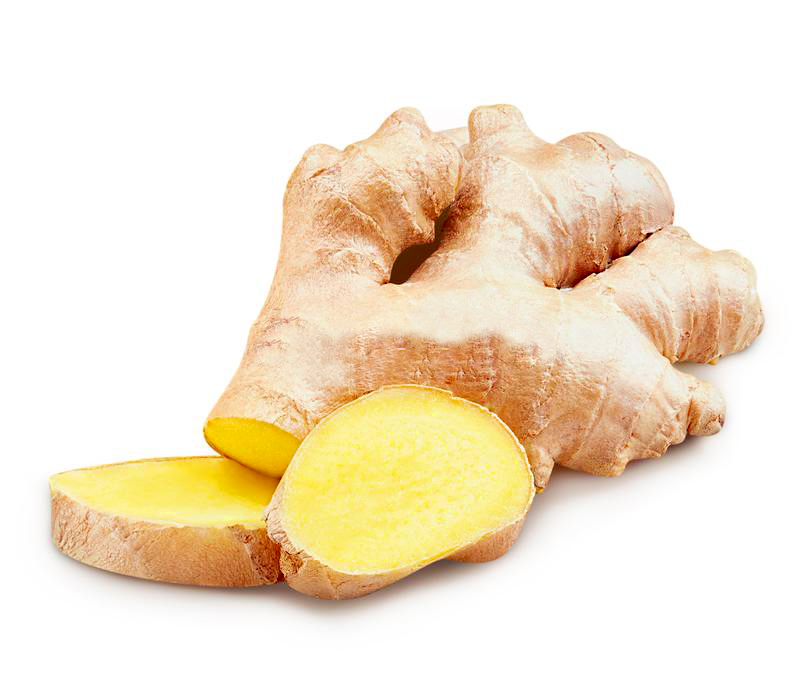 Ginger is perhaps the most famous member of the Zingiberaceae family, which contains about 1600 known species (including turmeric, cardamom, and galangal!). Botanically, ginger is a rhizome, or underground plant stem that continuously grows and sends out lateral shoots and roots. Human use of ginger traces back at least 7,000 years to Southeast Asia, where it was used not only to flavor food, but eventually also used in rituals, to bless ships, to weave baskets (using the plant’s leaves), and as part of traditional systems of medicine. And, it’s enjoyed periods of extremely high value: during the Middle Ages, a pound of ginger was worth the same price as one sheep! Today, ginger does not grow wild any longer but is exclusively a cultivated crop.

Ginger is extremely nutrient dense, although we rarely eat it in large enough quantities to obtain significant macronutrients or micronutrients. Five slices of raw ginger root contain 9 calories and small amounts of manganese, copper, potassium, magnesium, vitamin B6, and vitamin C, and fiber. 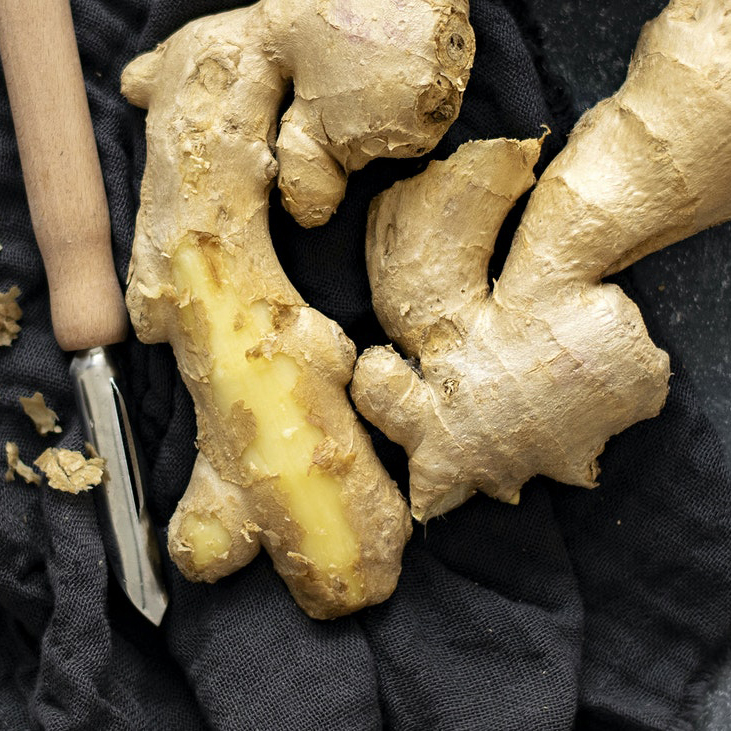 Where ginger really shines is in its phytonutrient content! In particular, it’s rich in phenolic compounds such as gingerols, zingerone, shogaols, quercetin, paradols, and gingerenone A, as well as terpenes such as zingiberene, β-bisabolene, α-curcumene, α-farnesene, and β-sesquiphellandrene. See also The Amazing World of Plant Phytochemicals: Why a diet rich in veggies is so important! and Polyphenols: Magic Bullet or Health Hype?

Thanks to its high concentration of these compounds, ginger offers some pronounced health benefits even when eaten in small quantities. For example, ginger’s reputation as a stomach-soother has been verified by research; it can protect against nausea in a variety of situations, including morning sickness and nausea following surgery or associated with chemotherapy. But, it doesn’t end there: ginger has also been found to have anti-inflammatory, anti-cancer, neuroprotective, cardioprotective, anti-obesity, anti-diabetic, lung-protective, anti-pain, and antimicrobial properties across a wide body of scientific research!

A number of studies have found that ginger and its bioactive compounds (especially 6-shogaol, 6-dehydroshogaol, and zingerone) affect phosphatidylinositol-3-kinase, protein kinase B, and NF-kB, explaining some of its anti-inflammatory properties and its protective role against inflammation-related diseases. 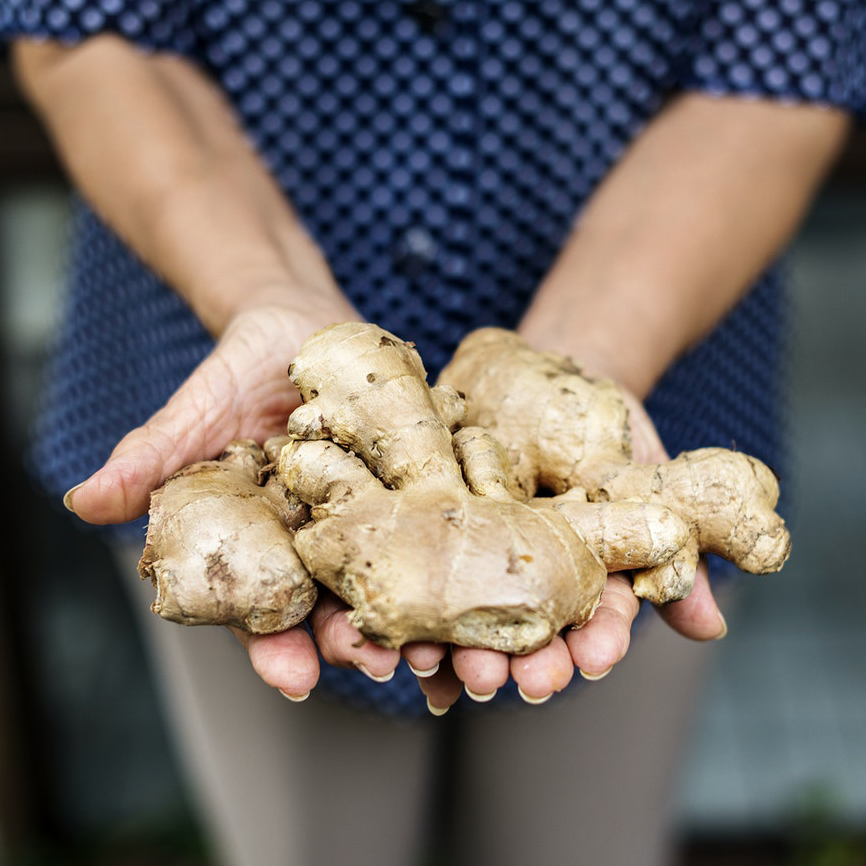 Excitingly, ginger (and specifically its phytonutrients 10-gingerol, 6-shogaol, and 6-dehydrogingerdione) also have neuroprotective benefits! Some studies suggest that ginger has a positive effect on memory and can reduce neuroinflammation, potentially giving it a role in combatting neurodegenerative diseases. In particular, 10-gingerol has been identified as the compound responsible for fresh ginger’s anti-neuroinflammatory properties, and has been shown to block NF-kB activation, reduce levels of nitric oxide, IL-1β, IL-6, and TNF-α, leading to lower expression of proinflammatory genes. In rodent models of impaired memory, ginger extract was able to improve cognitive function (as shown by novel object recognition tests), and appeared to promote the formation of synapses within the brain by activating extracellular signal-regulated kinase (ERK). Similarly, 6-shogaeol demonstrated neuroprotective activity through scavenging free radicals, activating Nrf2, and increasing levels of phase II antioxidant molecules like HO-1 and NQO1. An experiment using a mouse model of Alzheimer’s disease also found that fermented ginger reduced memory impairment by protecting neuronal cells in the hippocampus, while also increasing levels of presynaptic and postsynaptic proteins. Although more studies in humans are needed, the mechanistic and animal studies we have so far are promising!

Ginger also appears to be very healthy for the heart. In vitro, a variety of ginger extracts (methanolic, ethanolic, hexane, ethyl acetate, and water) have been shown to inhibit up to 76% of LDL oxidation from copper, suggesting a mechanism for protecting against heart disease. In rats fed a high-fat diet, for example, ginger extract raised HDL levels and lowered triglycerides, while also reducing very low-density lipoprotein levels, leading to a blood lipid profile associated with better cardiovascular health. In rats with hypertension, ginger consumption also significantly lowered their blood pressure, apparently due to decreasing the activities of angiotensin-1 converting enzyme and arginase. And, a cross-sectional observational study of humans found that daily ginger consumption was associated with a 13% lower risk of heart disease and 8% lower risk of hypertension. See also The Paleo Diet for Cardiovascular Disease

Ginger may even play a beneficial role in weight control. In mice fed high-fat diets, the phytonutrient gingerone A has was able to modulate fatty acid metabolism by activating AMPK, leading to protection against diet-induced obesity. In vitro, 6-shogaol and 6-gingerol have also been shown to enhance cellular fat catabolism by increasing peroxisome proliferator-activated receptor δ (PPARδ)-dependent gene expression. And in a randomized, double-blind, placebo-controlled trial of obese women, consuming 2 grams of ginger powder each day led to reduced BMI (as well as serum insulin and HOMA-IR index) over the course of 12 weeks. See also Paleo for Weight Loss 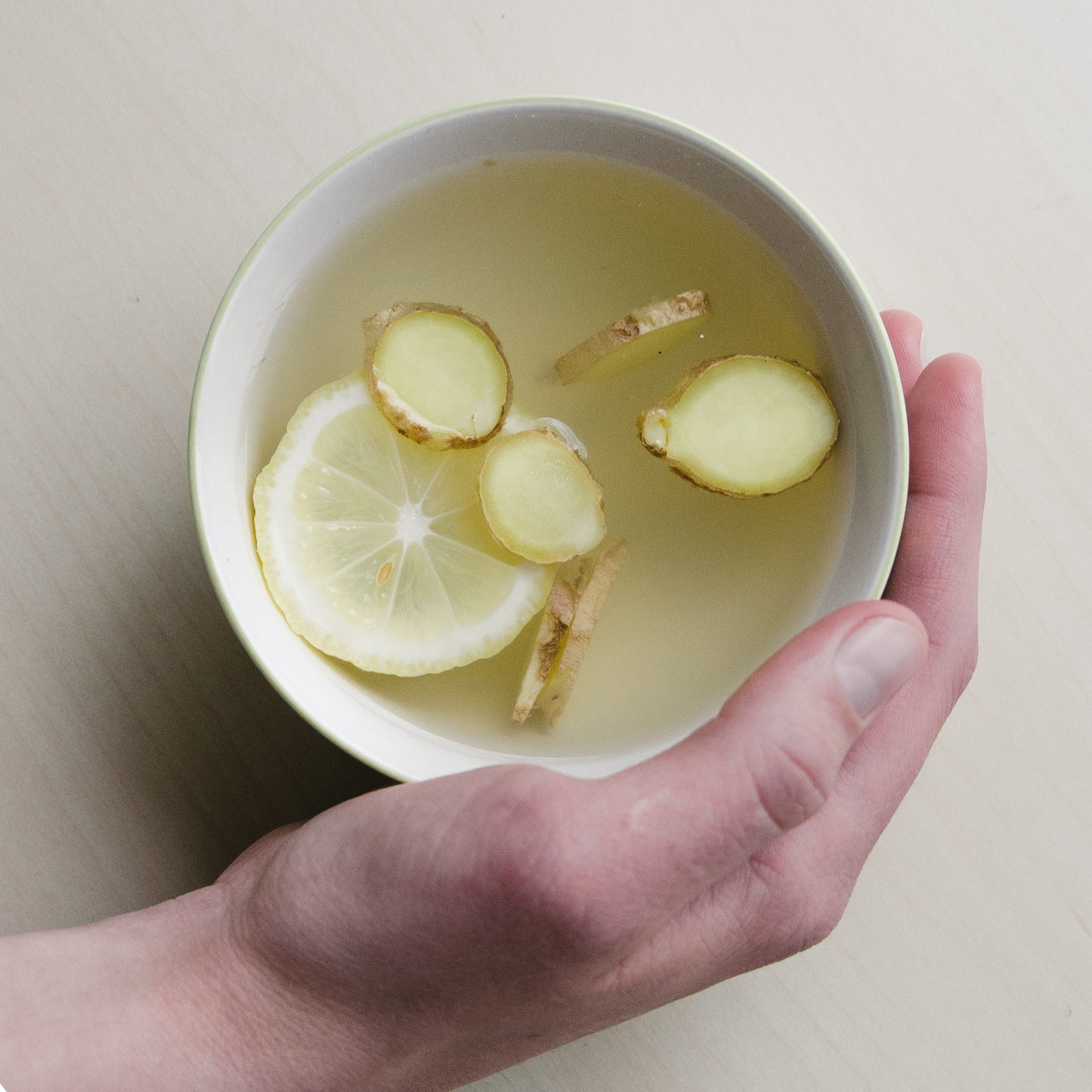 In addition, ginger shows promise for helping protect against diabetes. In mice with diet-induced obesity, 6-gingerol was able to reduce insulin and plasma glucose levels, while decreasing Nε-carboxymethyl-lysine (a marker of AGEs) through Nrf2 activation. In a different experiment of high-fat fed mice, the ginger phytonutrient 6-paradol significantly lowered blood glucose levels. Diabetic mice also responded to 6-gingerol treatment with increased cell membrane presentation of GLUT4, leading to greater glycogen storage in skeletal muscle tissue. And ginger’s anti-diabetic effects aren’t limited to animals: in a double-blinded, placebo-controlled trial of humans with type 2 diabetes, 1600 mg of ginger daily for 12 weeks lead to significantly lower fasting blood sugar, insulin, HOMA, triglycerides, HbA1C, total cholesterol, CRP, and PGE2 compared with the placebo group. A similar study found that 2 grams of ginger daily for two months, supplemented to patients with type 2 diabetes, led to significantly lower insulin, triglycerides, and HOMA index, while increasing the quantitative insulin sensitivity check index. See also The Paleo Diet for Diabetes, 3 Ways to Regulate Insulin that Have Nothing to Do With Food, and The Case for More Carbs: Insulin’s NonMetabolic Roles in the Human Body.

Although less commonly known, ginger may also help alleviate some respiratory disorders. Ginger is able to induce fast and significant relaxation in the airway smooth muscle while reducing airway resistance and inflammation, with a variety of human and animal studies showing that 6-gingerol, 6-shogaol, and 8-gingerol in particular are responsible for these effects! See also Paleo for Asthma and Allergies

And perhaps most famously, ginger has an impressive scientific track record for treating nausea and pain! Ginger has been shown to help reduce nausea and vomiting associated with surgery, elective C-sections, chemotherapy, motion sickness, and pregnancy, due in part to suppressing the activation of serotonin receptors in enteric neurons (and reducing sensations of nausea as a result). A systematic review and meta-analysis of 12 randomized controlled trials, encompassing a total of 1,278 pregnant women, found that eating about 1.5 grams of ginger is able to significantly reduce symptoms of morning sickness. Daily ginger consumption has been shown to reduce muscle pain, and may also help alleviate menstrual pain. In fact, one study of dysmenorrheic women showed that taking four daily doses of ginger powder (250 mg) during the first three days of menstruation was able to reduce menstrual pain as much as two different NSAIDs! Another study found that eating 2 grams of either raw or heated ginger for 11 consecutive days led to significant reductions in muscle pain following exercise-induced injury.

Ginger Is Also Great for the Gut! 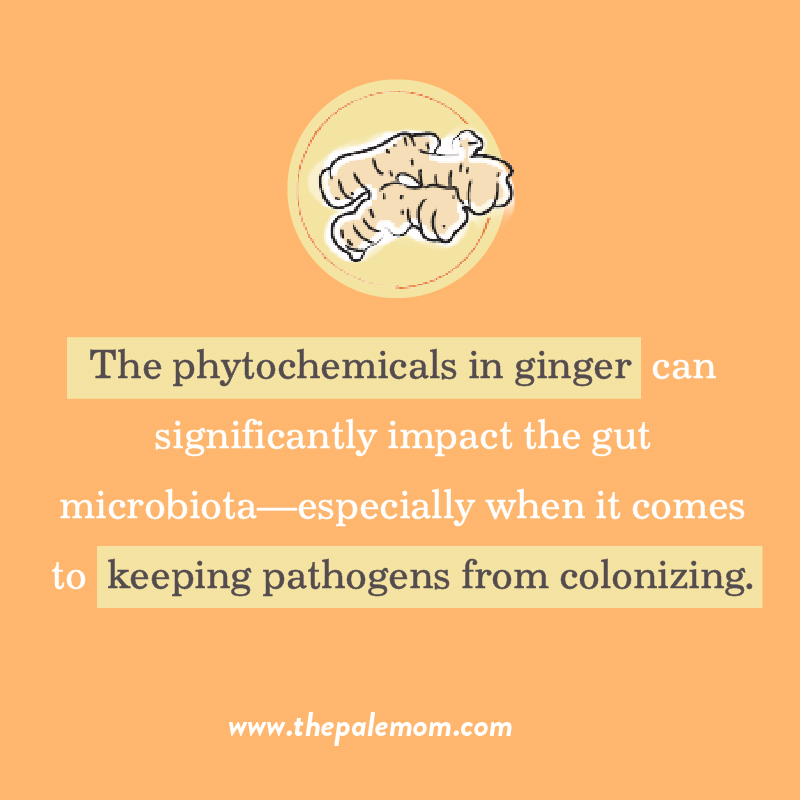 As far as the gut is concerned, ginger is also a win! The phytochemicals in ginger can significantly impact the gut microbiota—especially when it comes to keeping pathogens from colonizing. See also What Is the Gut Microbiome? And Why Should We Care About It?. The anti-microbial properties of ginger appear to work through inhibiting biofilm formation, reducing viral attachment to host cells, and preventing ergosterol biosynthesis (a key sterol in fungal cell membranes). One study found that ginger inhibited a drug-resistant strain of the pathogen Pseudomonas aeruginosa from growing, through inhibiting biofilm formation and affecting membrane integrity; another study found that the ginger components gingerenone-A and 6-shogaol reduced Staphylococcus aureus growth by inhibiting one of the pathogen’s enzymes (6-hydroxymethyl-7, 8-dihydropterin pyrophosphokinase). What’s more, essential oils in ginger can cause a loss of membrane integrity in fungi, in turn reducing its growth. This has been demonstrated in the fungal species Fusarium verticilliodes and Aspergillus flavus (the fungus that produces the carcinogen aflatoxin).

In one study, commercial ginger root paste and fresh ginger root paste were heated with ground beef, inoculated with E. coli 157:H7, and then left in storage at 4 degrees C or 8 degrees C for two weeks. The commercial ginger paste completely inactivated the E. coli at the three-day mark for both storage temperatures, while the fresh ginger paste showed antimicrobial activity only when stored at 8 degrees C. (Turmeric paste was tested as well, but didn’t show any antimicrobial activity against E. coli). Another in vitro study found that digested ginger extract was able to modulate the fecal microbiota, including promoting the growth of beneficial Bifidobacterium and Enterococcus, raising levels of short-chain fatty acids, and decreasing the pH of the simulated intestinal environment. This study found that 6-gingerol, the main polyphenol in ginger extract, was the main driver behind raising levels of beneficial bacteria. And in mice, ginger appears to have anti-obesity effects that are mediated through the microbiota—more specifically, enhancing levels of Bifidobacteria and SCFA-producing members of Alloprevotella and Allobaculum.

All in all, ginger is a flavorful rhizome with some great benefits to offer us! In addition to the recipes in The Gut Health Cookbook (like Fresh Ginger Coffee Cake, yum!), check out these gingery recipe: