This is the recipe that replaced the last bit of gluten-free grains in my 5-year old’s diet.  YAY!!!!  (Incidentally, it was the waffle recipe out of Eat Like a Dinosaur

that did the trick for my 2-year old.)  My daughter loves these and eats them every morning for breakfast.  The goal with this recipe (besides developing something with protein it that satisfies my 5-year old’s very sensitive palate) was to create a healthy and portable version of French toast, without the work of first making Paleo bread, then soaking in eggs, then frying.  I was inspired by those frozen toaster French toasts that were at one point a staple for us (so embarrassing to admit).  Borrowing the technique from sponge cake recipes, this flat-bread ends up with a consistency that is surprisingly similar to French toast.  They are also sweet enough to eat plain, are delicious warm or cold, and hold together well enough that they could be eaten in the car on the way to work or to school.  They also happen to be nut-free! 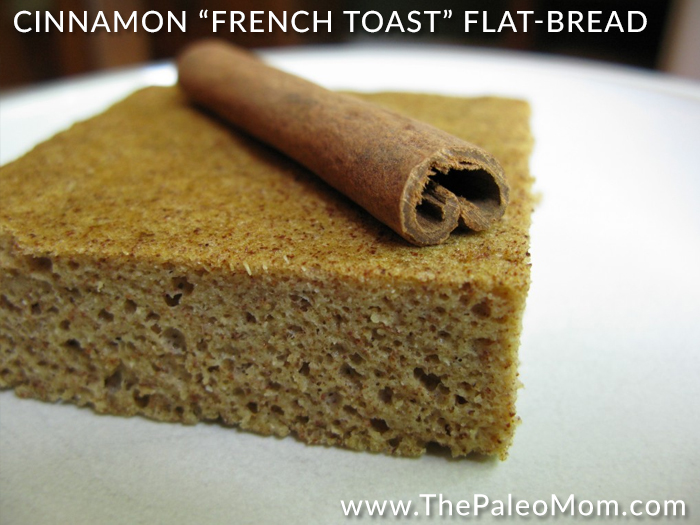 1.    Preheat oven to 350F.  Line a 9”x13” baking dish with wax paper.  If helps to grease the wax paper with palm shortening, but isn’t completely necessary (I usually don’t bother).
2.    Using a standing mixer, beat the egg whites until stiff peaks form (you can also do this with a hand mixer or even by hand if you prefer).
3.    In a small bowl, combine egg yolks, maple syrup, cinnamon, coconut milk, and arrowroot powder.
4.    Gently pour the yolk mixture onto the egg whites.  Add about half of the sifted coconut flour.  Gently fold the mixtures together.  As they start to combine, add the rest of the sifted coconut flour.  Fold until fully combined.
5.    Pour batter into prepared baking dish and spread out evenly.  Dust with extra cinnamon, if desired.  Bake for 18 minutes, until golden brown and spongy to the touch.
6.    Very shortly after removing from the oven, lift the flat-bread out of the pan (using the sides of the wax paper, or just flip the whole thing over onto a cutting board).  Carefully peel the wax paper off the bottom.  Slice into squares and enjoy warm or refrigerate for later.