It was my husband’s and my tenth wedding anniversary last Friday.  Because the book print date is so rapidly approaching with such a crazy amount of work left to do, we opted not to go out or throw a party (we keep saying “it’s ten years all year” and so maybe we’ll have a bigger celebration later in the year once things calm down, er, if things calm down).

I still wanted to do something special to mark the occasion.  So, I pulled out the white table linens and all of the little bits and pieces I saved from our wedding: the table decorations (the silk calla lilies, glass beads, star confetti, tulle, ribbons, and fake strings of pearls) , our place cards (plus I made some new ones for the girls), the candle holders from the unity candle ceremony (plus some extra candles for good measure), and the little decorated bottles of bubble that were given as favors (I had three).  We ate in the dining room as opposed to the kitchen (which we only ever do when we have company).  The girls wanted to be flower girls so we found some frilly white and pink special occasion dresses at the back of their closets and they also wore tiaras from the dress-up box.

And we had a romantic candlelit dinner for four.

If I had planned ahead, I would have made salmon because that’s what we had at our reception.  Since this was all a last minute idea, we had pork shoulder with braised sweet potato greens, applesauce, sauteed parsnips, and steamed baby broccoli.  And, to make it an extra special meal, I made dessert!

My husband is a sucker for all things lemon and I happened to have a couple of really large Meyer’s lemons in my fridge that my youngest had picked out at Whole Foods earlier in the week (at the time, I wasn’t sure what I was going to do with them, but lemons have a way of getting used in my kitchen so I pick a couple up almost every time I shop).  You don’t need Meyer’s lemons for this recipe.  Any lemon or even some other citrus (like oranges or tangerine) would work.  Meyer’s lemons are a cross between lemons and a mandarin orange (according to Wikipedia).  They taste very lemony but are sweeter than the average lemon, which makes them nice to use for desserts since you don’t need to add much sugar.

My Meyer’s lemons were very large (about the same size as a standard lemon).  This means that the juice of one lemon is 3-4Tbsp and the zest is 1-1 1/2 Tbsp.  I’ve also seen Meyer’s lemons that are much smaller.  If that’s what you’re using, use 2 for each of the custard and the souffle instead.

Speaking of sugar, I used evaporated cane juice for this recipe.  I think any granulated sugar would work (although probably not date sugar), so if you wanted to use Muscovado sugar, coconut/palm sugar, or maple sugar, I think the chemistry would work out fine.  All of those sugars will make the final color a little browner, less that pale yellow that lemon souffle is normally… so if you wanted that perfect color, you’d have to use white sugar (see Is Sugar Paleo?).  This recipe would also tolerate the addition of an extra tablespoon of sugar in both the custard and the souffle, so if you were making these with regular lemons or wanted it to be sweeter for non-Paleo company, that would be an option (note: this isn’t a super sweet recipe.  I basically used the minimum amount of sugar that I could get away with and still have the chemistry of the souffle work out).  It’s important to make your sugar as fine as possible (ideally as fine as caster sugar).  I blended my evaporated cane juice for about a minute, until it was a super fine powder and measured after blending.

I am certainly not a souffle wiz and can count on one hand the number of times I’ve attempted one.  So, I’m not the best person to ask for souffle troubleshooting advice.  I do know that it’s important to have your eggs especially (but really all of your ingredients) at room temperature, not to overbeat your whites (although I beat mine until super stiff, so I’m not quite sure how you would actually do that), and not to have giant elephants stomping around your kitchen while they’re cooking.  Souffles do fall after they are removed from the oven, so ideally you would time this dessert to be served fairly soon after they come out of the oven (like within five minutes).  But really, don’t worry if you’re souffle falls while cooking.  It will still taste good.

All in all, this was a wonderfully decadent dessert.  The lemon custard on the bottom gives it a creamy, moist texture while the souffle is light and fluffy (a great combination).  This one is for my husband (happy anniversary!) and for all the other lemon lovers out there. 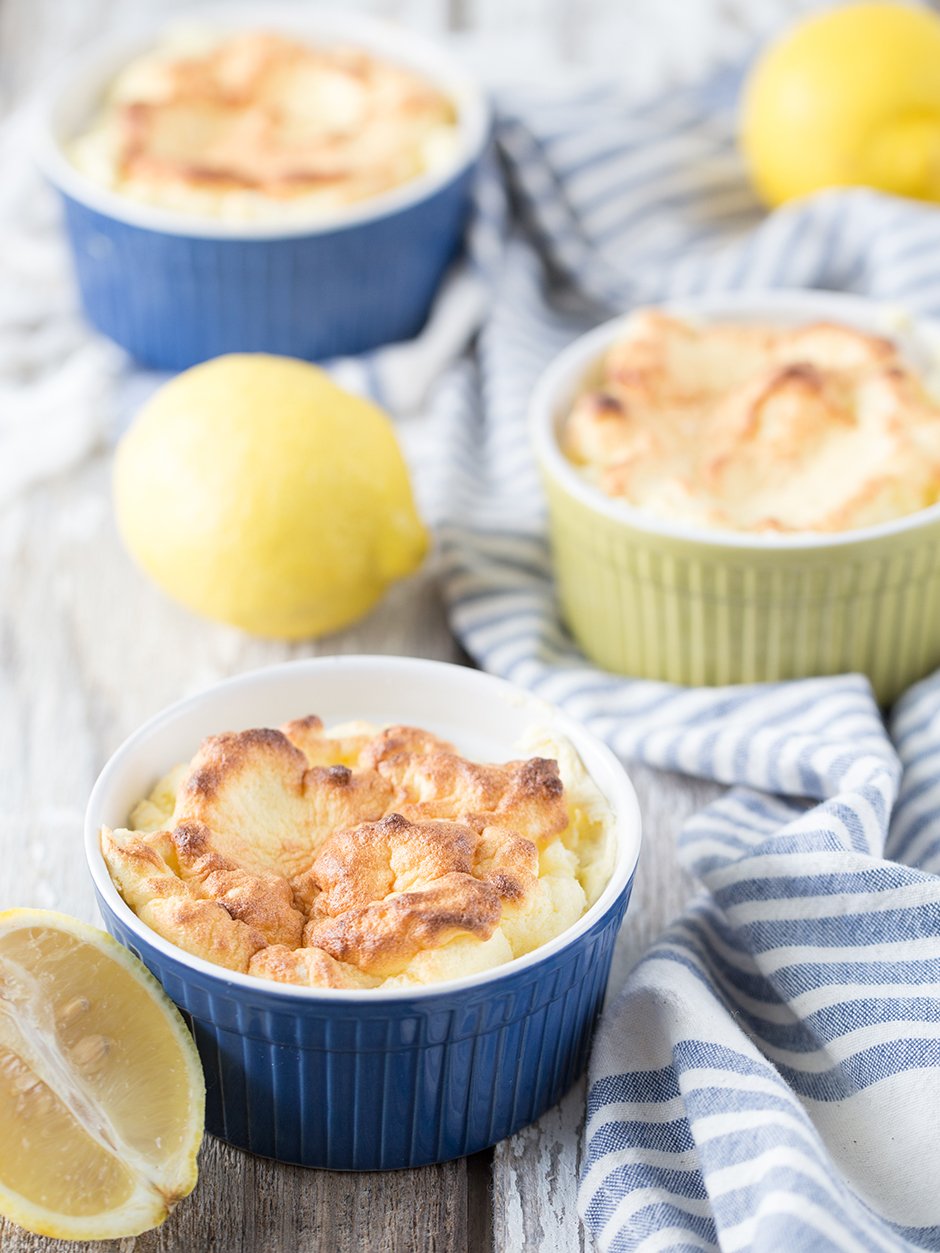