Learn More
Home » Blog » How Long Does it Take the Gut to Repair after Gluten Exposure?
FacebookTweetPinLinkedIn

This is a very relevant question for those who are just embarking on their gluten-free journey.  But, it’s also extremely important for anyone who has been following a Paleo/primal/gluten-free diet for a while, but has been inadvertently exposed to gluten.  It sometimes feels as though the longer we avoid gluten, the more sick we feel after accidentally eating some.  This is in large part because the body stops protecting itself from gluten (for example, there may be less mucus in the gut) so when we do consume some, we are defenseless.  It may also be because we forget how we used to feel and are so used to feeling so much healthier.  Whether you are new to Paleo or have been eating this way for a while, a common question is:  how long does it take the gut to heal after gluten exposure?

I have talked about the irritation, inflammation and damage to the lining of the small intestine that can be caused gluten (I promise I will go back and add references to this post soon) and I have mentioned that it can take up to 6 months for the body to fully heal after a single gluten exposure.  After delving into the research more thoroughly, I have discovered that this statement is simultaneously a gross understatement and an overstatement.  Just like the extent of damage that gluten causes varies from individual to individual (see this post for a little bit more on variability in tolerance), so does the length of time it takes to recover.  And it’s not as simple as the more damage you have, the longer it takes to recover.  There are factors that control how sensitive you are (genetics, overall health, diet, stress, nutritional-deficiencies, gut microflora) and there are factors that affect how quickly you heal (okay, it’s the same list of factors, but it’s more complicated than A+B=C).

The cells that line the gut, called enterocytes or gut epithelial cells are organized into hills and valleys (to help maximize the surface area of the gut), forming finger-like columns of cells called villi separated by valleys called crypts.  The enterocytes are constantly regenerating themselves (a pool or resident stem cells supplies the new enterocytes).  As the cells age, they migrate higher up the villi and are eventually shed into the gut to be redigested (yes, we are constantly cannibalizing ourselves).  This is called the “turnover” of the gut epithelium.  In the normal healthy gut, the enterocytes migrate to the top of the villi in in 1-4 days, meaning that all of the villi cells are replaced with new cells every 3-5 days (this gets slower as we age) 1,2,3.  The cells that migrate toward the bottom of the crypts have a longer lifespan of 2-3 weeks.  What does this mean?  A healthy person has an entirely new intestinal lining every 2-3 weeks. 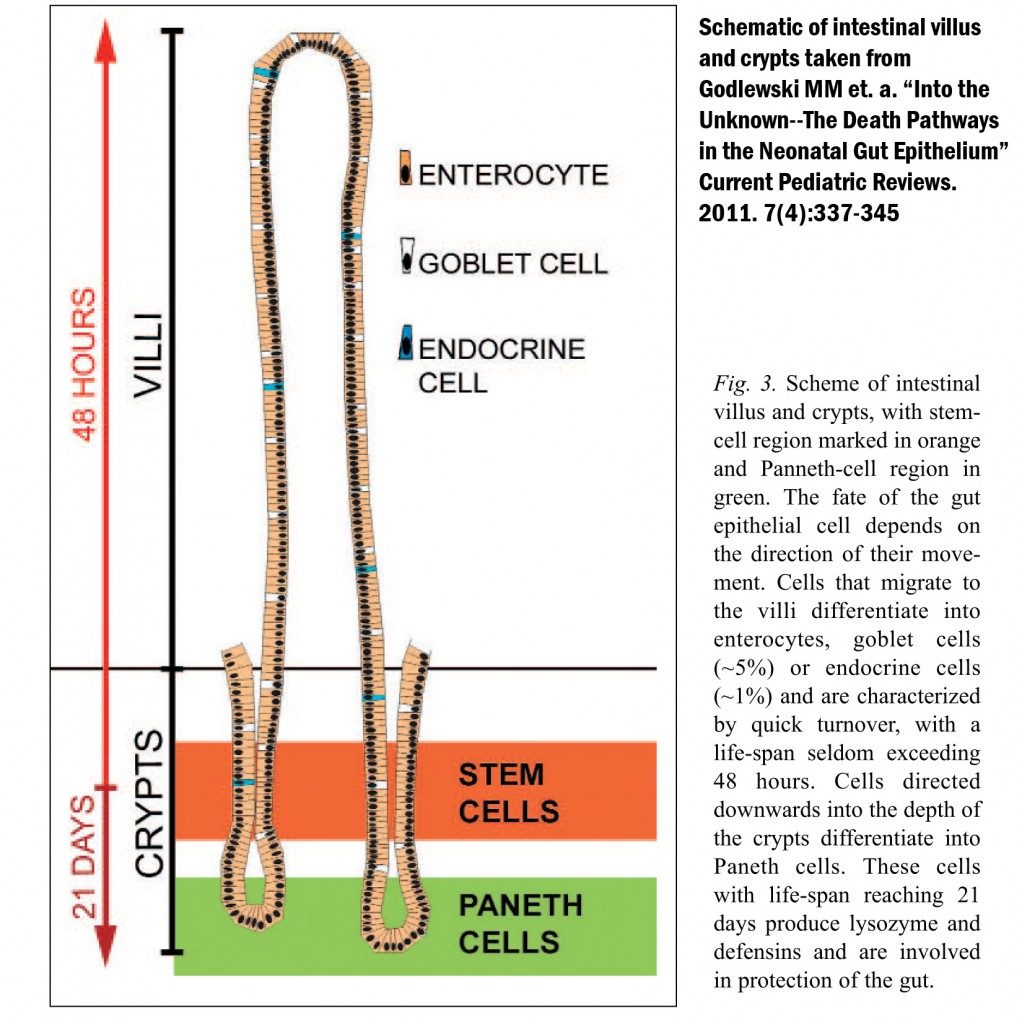 Repairing the intestine following injury (whether that is caused by ingested toxins, infection, or some other injury) is a more involved and complex process that is tightly regulated and controlled by the body (for a detailed understanding of this process, see reference 4).  The healing time varies depending on the extent of injury and studies trying to understand the role of the resident stem cells of the gut show that repair of the crypt and villi structure of the intestinal wall after injury can take anywhere from 2 to 12 weeks (depending on whether the stem cells themselves are injured) in the absence of confounding factors 4,5.

What does this mean?  For healthy individuals without celiac disease or gluten sensitivity (where their bodies are producing antibodies against gluten), the damage to individual cells and the junctions between them that can be caused by gluten is relatively fast to heal, anywhere from a few days to 3 weeks.  For these healthy individuals, most of this time is likely asymptomatic.  Many people report symptoms that only last from a couple of hours to a couple of days after gluten exposure.  This also means that healthy individuals should be able to heal their guts completely after following a 30-day Paleo challenge such as a Whole30.

For those with confounding factors, healing is slower. Confounding factors are numerous and include gluten sensitivity (where the body is producing antibodies against gluten which increases inflammation and slows healing), celiac disease (an autoimmune condition), uncontrolled inflammation in the gut (which could be caused by food allergies, food sensitivities or diseases such as Inflammatory Bowel Disease), nutritional deficiencies (which can be caused by having a very inflamed and damaged gut, but slows healing because not all of the raw materials needed to repair are available), gut dysbiosis (the wrong type, amount and/or location of microorganisms in the gut), infections, stress, body-wide inflammation, and chronically elevated insulin.

How much do these confounding factors slow healing?  The extreme end of the spectrum is those with Celiac Disease, an autoimmune condition triggered by gluten exposure.  One hallmark of Celiac Disease is a shortening or blunting of the intestinal villi which is observed by performing a biopsy of the small intestine (they are typically 3-5 times longer in healthy individuals than those with Celiac Disease).  For those with celiac disease, one study showed that only 66% of patients had a normal intestinal biopsy after 5 years on a gluten-free diet 6.  This means that even after 5 years, 34% of Celiac Disease sufferers had not recovered.  There are no good similar studies evaluating intestinal repair in people with non-celiac gluten-sensitivity, but medical professionals who specialize in treating gluten-sensitivity report time frames of approximately 1½-2 years 7.

It’s probably worth mentioning here that current reports suggest that both Celiac Disease and gluten-sensitivity are ridiculously underdiagnosed.  It is estimated that 1 in every 100 Americans suffer from Celiac Disease but only 5% are ever diagnosed 8.  This means that there is something like 2.5-3 million Americans with celiac disease that have no idea that they have it (when you extrapolate this statistic globally, it’s even scarier!).  Gluten intolerance is estimated to affect 15-20% of the population 9.  The take home message here?  Even if you have never been diagnosed with celiac disease or gluten intolerance, you may have one of these conditions which could be contributing to slowed intestinal repair after switching to a Paleo diet or after accidental gluten exposure.

How much gluten can cause a problem?  This is highly individual.  For those with Celiac disease (whether confirmed or undiagnosed), even a minute amount of gluten can cause significant damage to the small intestine in the majority of sufferers 10.  Interestingly, a not unsubstantial percentage of these people (22%) will have significant damage to their small intestine but not suffer any gastrointestinal symptoms.  For healthy individuals, the threshold amount to suffer symptoms is highly variable.  Unfortunately, you don’t know until you test it on yourself.

So, how long does it take the gut to repair after gluten exposure?  Once again, like so many topics I cover on this blog, the answer is “it depends”.  For healthy individuals, healing likely takes only a couple of weeks.  For those with celiac disease (and perhaps autoimmune diseases in general), fully healing the lining of the small intestine may take years.  The rest of us can be anywhere in between.

6 Rubio-Tapia A “Mucosal recovery and mortality in adults with celiac disease after treatment with a gluten-free diet.” Am J Gastroenterol. 2010 Jun;105(6):1412-20.