The Benefits of Eating Dirt 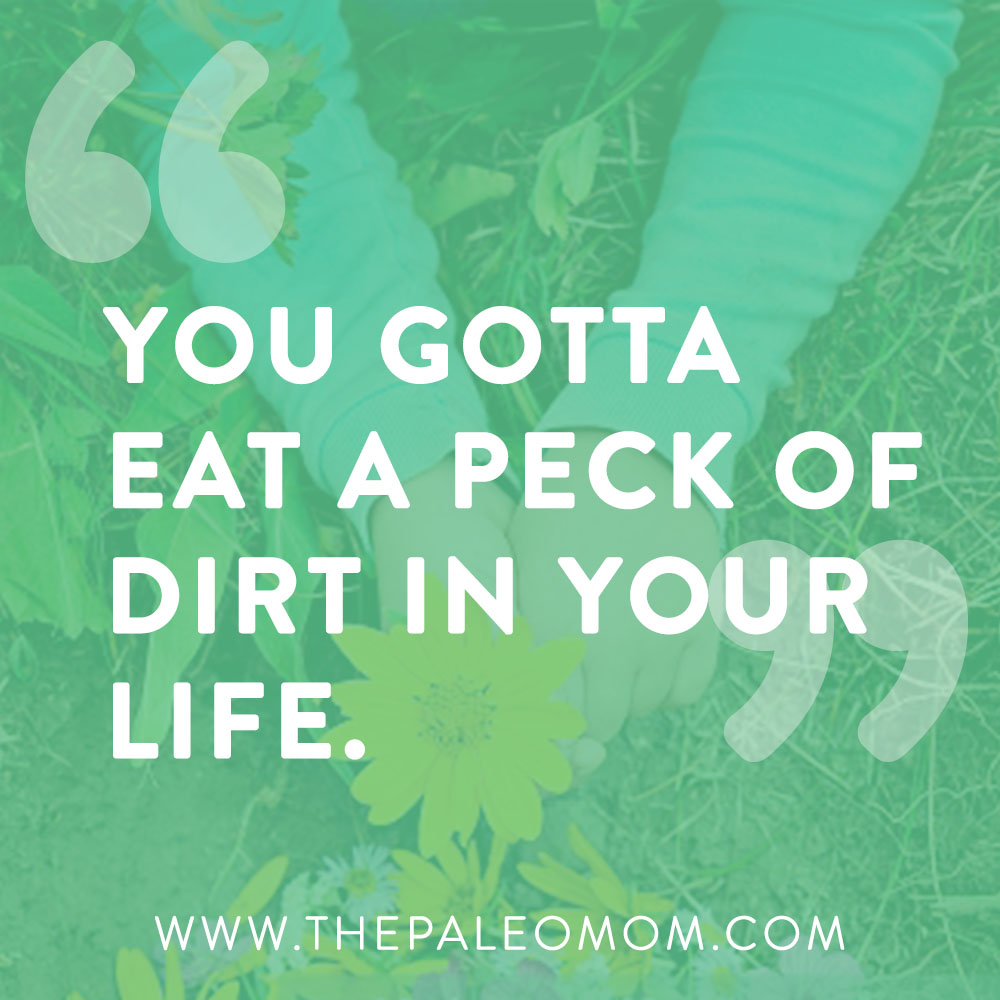 k of dirt in your life.” Fell and face-planted in the sand?  “Gotta eat a peck of dirt in your life.”  And, what amuses me now looking back is that my mom was completely correct! There really are great benefits to eating some dirt (and that notion is supported in the scientific literature, too). No, that doesn’t mean grabbing a bowl and a shovel, but rather making conscious choices not to wash organic vegetables and eat them with a little soil instead. Or, we can opt for a probiotic that includes some dirt.

I can’t take credit for the idea that we all need a little more dirt in our lives. There is such a thing as the “hygiene hypothesis,” which suggests that being too clean might contribute to immune dysfunction and autoimmune disease. This idea originates with World Health Organization epidemiological data indicating that some autoimmune diseases (such as Type 1 Diabetes and multiple sclerosis) that are extremely rare in most rural or traditional African and Asian populations are more prevalent in these same people when they migrate to a modern setting. There is more to moving into the developed world than hand sanitizer and disinfecting wipes – there are packaged foods; processed foods; high-fructose corn syrup; genetically modified crops; meat from animals fed food they weren’t meant to consume and injected with antibiotics to compensate for their poor living conditions; and produce grown in nutrient-poor soil, sprayed with chemicals, and harvested before it is ripe so it can be transported thousands of miles to your local grocery store. There are antibiotics, aspirin, and antacids. There is coffee to perk you up in the morning and sleeping pills to help you sleep at night. 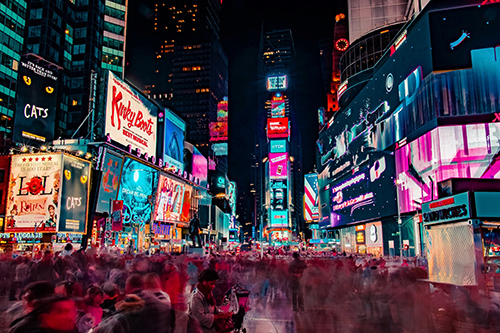 Noise and light pollution, traffic, alarm clocks, deadlines, bills, lightbulbs, the Internet, and late-night TV all come with the territory. Of course, when used conscientiously, some of this technology can improve our quality of life, but some of it contributes to stress, disrupted circadian rhythms (see Regulating Circadian Rhythms (and why that’s important)) and inflammation. And, we are just now starting to understand the consequences of these problems: not only is autoimmune disease implicated, but so are many other diseases of modern living (like cardiovascular disease, type 2 diabetes, and even some neurological conditions like Parkinson’s disease and multiple sclerosis).

This is all to say that the increase in autoimmune disease (and other diseases of modern living) in, say, big cities is obviously due to more than the fact that our environments are deficient in the beneficial microorganisms commonly found in rural settings. But, I believe that we all need to consider every aspects of our lives when we approach our health (that’s why there’s both a Nutrition and a Lifestyle menu on this website!)! There are two big reasons to opt-in on dirt: first, soil-based organisms are hugely important for a healthy microbiome, and, second, the mineral content of dirt can’t be beat. Both of these topics are discussed in my New York Times Bestselling Book, The Paleo Approach. 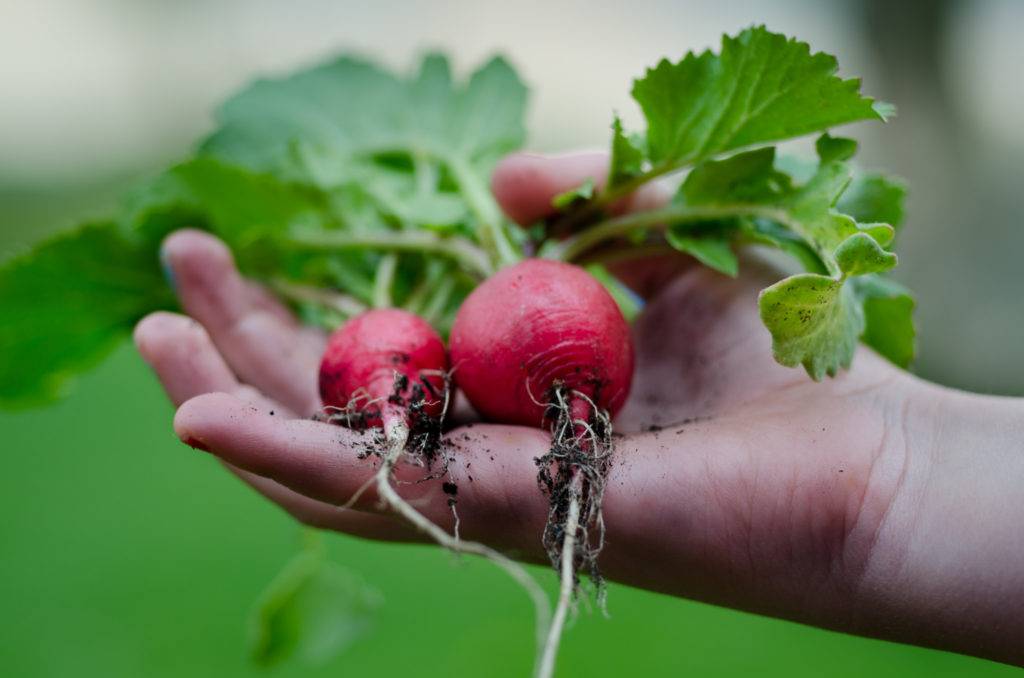 An often-underrated source of probiotics is soil. Soil-based organisms (SBOs) have not been as extensively studied as either Lactobacillus or Bifdobacterium strains of bacteria. However, they are normal residents of a healthy gut and have been shown to be potent modulators of the immune system, and supplementation with SBOs has been shown to be beneficial in diabetes, chronic fatigue syndrome, insomnia, and IBS. In fact, one of the biggest differences between the gut microbiota of people living in Western cultures and hunter-gatherers in rural Africa (who have a much lower incidence of autoimmune disease, cardiovascular disease, diabetes, obesity, etc.) is the presence of soil-based organisms (specifically a phylum of bacteria called Bacteroidetes with a unique abundance of bacteria from the genera Prevotella and Xylanibacter). This is certainly one area in which the “hygiene hypothesis” I mentioned above is absolutely correct. Our sterile environments deprive us of exposure to soil-based organisms. You can buy soil-based probiotic supplements, but you can also just play in the dirt (a good excuse to take up gardening!) or grow your own vegetables (or buy locally-grown organic vegetables) and eat them without washing them. OK, you can rinse off the big clumps of dirt. Plus, since we know that gut microbiomes vary by location, consuming dirt-dusted produce from a local source is more likely to benefit your gut microflora, as the microbes may be the same or similar species.

In addition to being a host for some important microorganisms, soil is an awesome source of minerals that can otherwise be difficult to get in our diet. In fact, there is new research demonstrating that the psychological disorder called “pica,” which involves the compulsive consumption of non-food substances like sand and dirt (most often in children and pregnant women), may be the result of nutritional deficiencies. Why? Soil is incredibly rich in essential dietary minerals such as calcium, sodium, zinc, and iron in addition to containing dozens of trace minerals. We all know that we can obtain dietary minerals from, well, our diets, but it’s important to remember that there is s 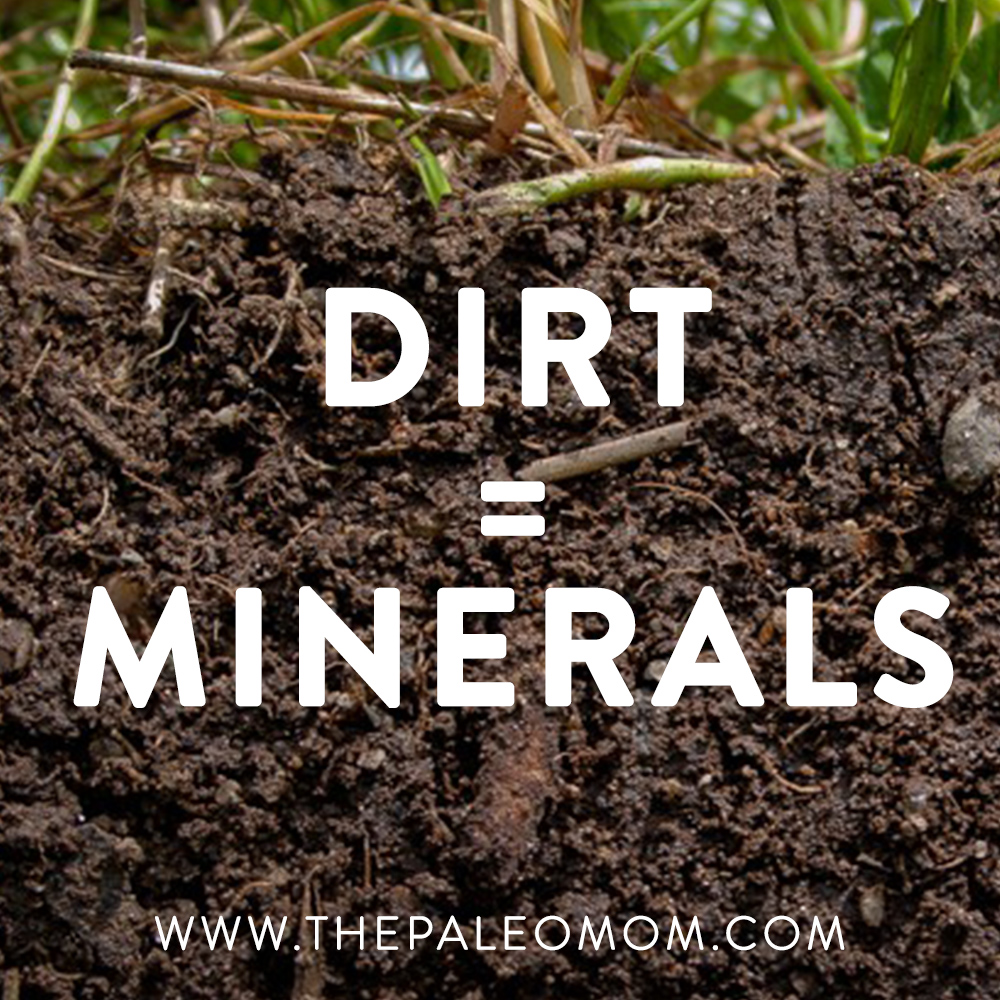 ome variability in the nutrition that we get from our food, depending on many factors that extend well beyond soil quality (sorry to break the bad news). Consistently including a little soil increases our chances of getting the right amount of mineral content into our bodies while also adding some more variety to our intake! Soil and water provided Paleolithic man with substantial amounts of essential minerals, two sources we mostly miss out on today with our uber-clean grocery-store produce and our bottled or treated municipal water (see Is Salt Paleo?).

Importantly, the mineral content of dirt is highly dependent upon the source location and the type; for example, clay is known to have the most mineral content due to its high water-holding capacity (minerals bind to water because of their positive ionic charge) and small particle size. I’m not saying that we should all go out and grab handfuls of sand, or we should stop off on the side of the road for a tasty dirt snack (definitely don’t do those things, please). But, leaving small amounts of dirt on our organic produce while we prepare and eat it can provide us with some great added nutrients. From a scientific perspective, since most farms are in areas that are a mix of silt and clay, the mineral content of dirt on a small organic farm’s produce should be sound (but of course, it is important that the soil not be treated with any pesticides, because we don’t want to consume that! Yet another reason to go organic).

While not as extensively studied as Lactobacillus and Bifidobacterium probiotics, soil-based organisms hold extreme promise for modulating the immune system and correcting gut dysbiosis. They have been shown to have extreme therapeutic potential for IBS and provide probiotic organisms that are routinely lacking today due to our society’s obsession with hygiene, yet are normal residents of a healthy gut. In fact, there is even clinical trial evidence to suggest that using this type of probiotic complex is effective in controlling the symptoms of IBS over the course of a year.

Make sure that the brand you buy does not contain the potentially pathogenic strains Bacillus licheniformis, Bacillus cereus, or Bacillus anthracis. (Most, if not all, manufacturers of soil-based-organism supplements have removed these strains from their formulas.) 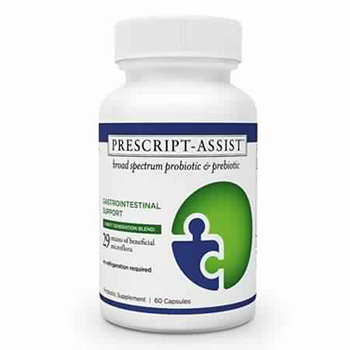 Prescript-Assist changed their formula in 2017. Due to lack of validation trials (for the new formulation as a whole and for many of the included strains), I can no longer recommend this supplement.

Instead, I recommend Just Thrive probiotic.