September 27, 2018 by The Paleo Mom Contributor 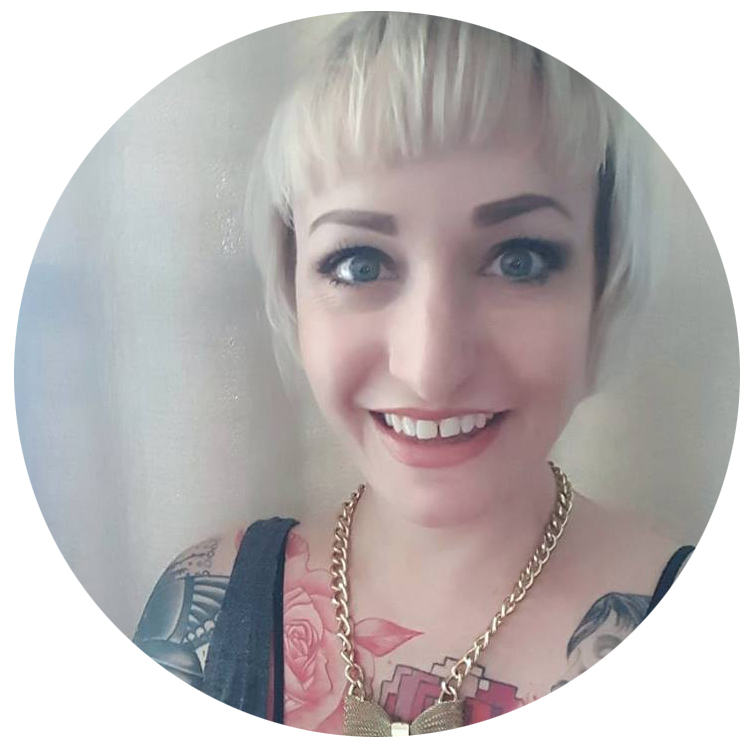 Samantha Jo Teague is the blogger behind The Unskilled Cavewoman, and is the author of AIP Sheet Pan Recipes (an AIP ebook with 40 recipes that can all be made on a sheet pan, designed to make cooking for the autoimmune protocol easy to prep for and clean up after). She also recently began podcasting at The Unskilled Cavewoman Podcast. She uses the AIP to manage her Hashimoto’s, suspected Celiac, IBS and Hypogammaglobulinemia. She has also contributed to the community cookbooks, The AIP Instant Pot Cookbook, Freezer Cooking for the Paleo AIP, and 30 Minute Meals for the Paleo AIP. She posts recipes and wellness inspiration regularly on Instagram and Facebook. She is currently studying to become a Certified Paleo Nutritionist and plans to become a health coach after completion of her studies. She lives in Lewisville, Texas (near Dallas) with her life partner, her daughter, his daughters and three furry emotional support animals.

I’ve always, I mean ALWAYS loved cooking. I love the creative process, how you can bring a smile to someone’s face by bringing them a plate of food, the sizzle in the pan, and the feel of a good sharp knife beginning the crafting of a meal on a fresh cutting board. My adoration for cooking inspired me to become certified in the culinary arts, and I went to school at Ballymaloe Cookery School in Shanagarry, Ireland when I was 19 years old. Over the years since, I’ve worked in a range of different kitchens: from fine dining; to assisted living; to a local & organic meal-kit prep kitchen; as well as a brief stint of cooking in a hospital; and my favorite cooking position of all time (so far): a wellness diets private chef. It’s rewarding taking all I’ve learned over the years as a growing chef and applying that to the recipes on my blog and in cookbooks, with an emphasis on making allergy-friendly, flavorful meals as easy as possible to put together.

My health has also been a big driver for my cooking style. I struggled with dysmenorrhea and candida since the late 1990’s, and in the years between 2004 and 2008 I had my appendix, tonsils and gallbladder removed. I battled chronic sinus infections, eczema and GERD during this time period as well and was over-prescribed birth control, corticosteroids, hormones, PPI’s and antibiotics in doctors’ attempts to control my symptoms. In 2010 I was introduced to a gluten-free diet and my health slightly improved, but I did not go fully gluten-free until after 2012. In 2013 I began to have fibromyalgia, and decided to go fully gluten free. My energy improved slightly, but then more food intolerances began to surface. Next to cause gut distress was dairy, so I changed to a Paleo diet. Paleo helped for a little while longer, but then in 2014 nuts began to make my gut (whom I have lovingly nicknamed “Miss Picky Belly”) go haywire…then one after another more and more foods began to induce pain. My energy continued to tank, my joints were painful and rigid, and my ability to think properly and speak were starting to deteriorate. 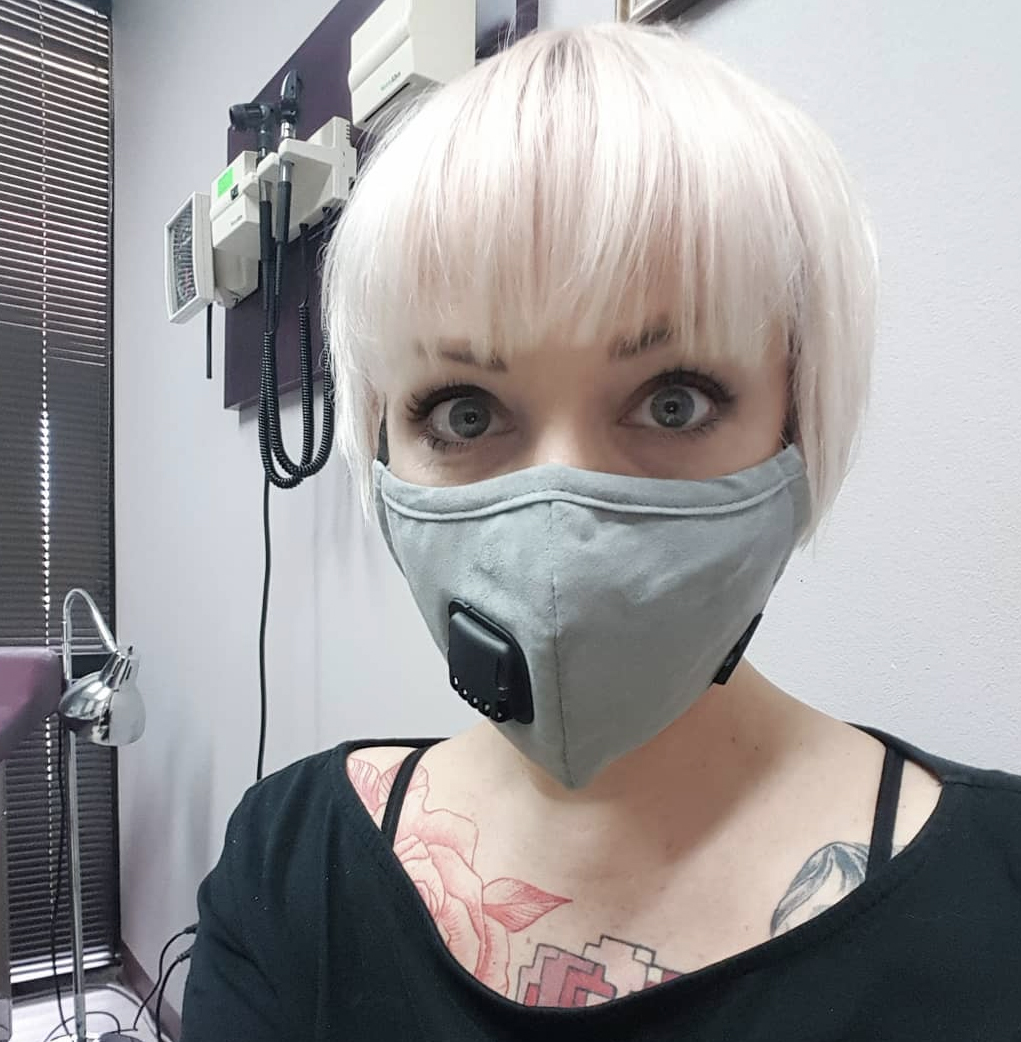 This food intolerance downward spiral led me to discover the Paleo AIP a la The Paleo Mom. I just KNEW that this was what I needed to heal. It was definitely an “aha” moment. I took about 6 weeks to ease into the AIP by removing one elimination food group at a time, then in December 2015 I began the full elimination protocol. Within the next month my energy had improved some, my eczema had completely disappeared, my joint pain had decreased, my cognitive abilities improved, and Miss Picky Belly was functioning a bit better. I continued on the elimination phase of the AIP for 8 months before attempting reintroductions. When I did not have much luck with reintros other than seed spices, aged dairy and very well cooked nightshades, and my gut began to have issues with cruciferous and fibrous vegetables, I turned to further healing measures to address underlying issues: adrenal fatigue, SIBO, candida and parasites. It wasn’t until these issues were addressed that my digestive issues further improved and I was able to add in more re-introductory foods.

When I continued to have fatigue I ordered testing that led to my diagnosis of Hashimoto’s in 2016, and I now take a natural desiccated thyroid supplement which has contributed to less fibromyalgia. My continued digestive distress and remaining lingering fatigue have now been diagnosed as both low beneficial gut bacteria, and also a primary immunodeficiency disease called Hypogammaglobulinemia. This immunodeficiency leaves my mucosal linings with not enough protection from viruses and bacteria and is the cause of my chronic bodily infections. My plans for both of these remaining issues are to: 1) reintroduce healthy human bacteria to my gut in the form of Fecal Microbiota Transplantation; 2) continue working with my immunologist in an attempt to qualify for Immunoglobulin Replacement Therapy, an IV treatment that will replace my body every few weeks with the human substances that my body does not make enough of. I have a lot of hope that this health journey of mine is far from over, and that I will continue to heal and thrive. 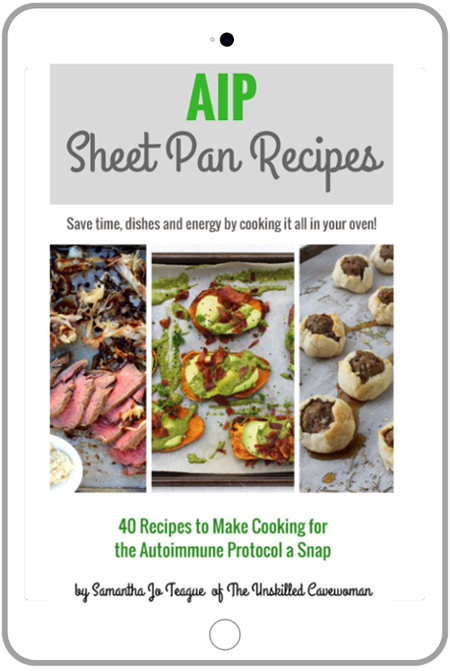 In my ebook, AIP Sheet Pan Recipes , I really wanted to keep things in the kitchen as simple as possible for those who are struggling with their health. It’s hard enough to just function with your daily human duties when you have chronic illnesses, let alone find the time to cook AND clean up a pile of dishes when you are on a healing protocol…since virtually everything you eat requires scratch cooking. Even if you don’t have any special equipment other than a blender, the dishes come together in a snap. I don’t like to use a jillion bowls or utensils either while I cook, so those techniques are in there too. And if you are a fan of parchment paper like myself, you’re in for a treat: peel that baby off after you’re done and voila…no tiresome scrubbing!

The book has 40 recipes, including chicken, beef, pork, seafood, veggies and a handful of breads and treats. Prep it up, add it to your sheet pan, then let the magic of the oven take care of your meal with no standing over the stove.

A bonus: Since my digestion is sluggish, the recipes were also naturally designed for Miss Picky Belly’s happiness…so my hope is that your Ms./Mr. Picky Belly smiles and feels good while enjoying these recipes, too.

This Beef Bulgogi Pan recipe was my partner’s (“Hunni”) absolute favorite dish from the book. He has been so supportive of everything I do, so I thought it would only be fair to share this one with you guys as well. It’s got tender steak that crisps up on the edges, thinly sliced cabbage and carrots and a delicious, barely-sweet Korean BBQ spiced sauce for a lovely Asian take-out flavor. 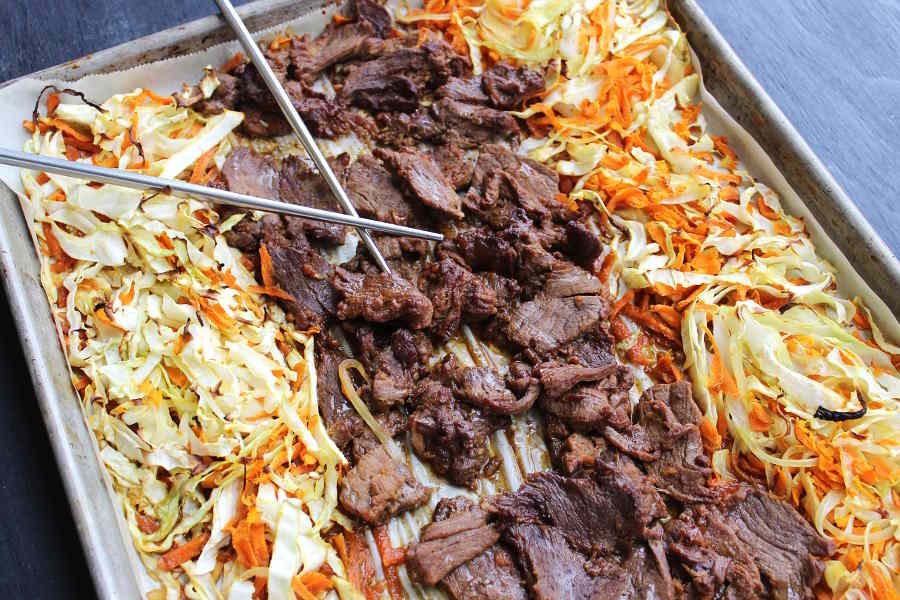 Notes: If you have time to boil some sweet potato starch noodles or spiralize/grate some zucchini noodles, this also goes well atop oodles of noodles!

ThePaleoMom.com occasionally invites well-known experts in the health and wellness sphere to provide high-quality exclusive content for our readers, as well as testimonials from followers. You can learn more about this article’s guest contributor in the article itself.