You are here: Home / Autoimmunity / Nuts and the Paleo Diet: Moderation is Key 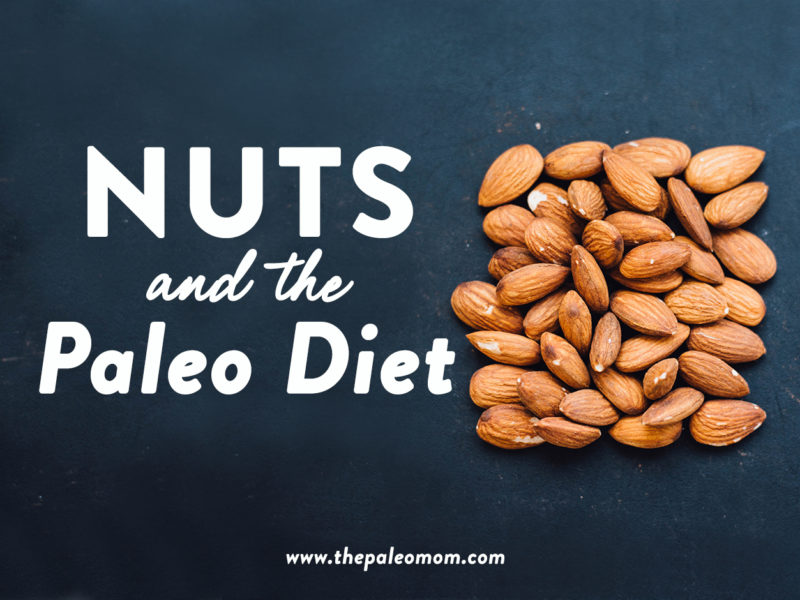 Nuts and seeds are typically regarded as nutritious, health-promoting foods and since they were around before humans even existed, it’s hard to argue that they’re not really Paleo!

A mere 20 grams of tree nuts per day is associated with substantially reduced risk (think 20-70%) of cardiovascular disease, cancer, neurodegenertative disease, kidney disease, diabetes, infections, and mortality from respiratory disease. Even three 1-ounce servings per week can lower all-cause mortality risk by a whopping 39%, meaning that not only can eating nuts on a regular basis improve health but they can potential extend lifespan too.

Nut consumption is also known to decrease markers of inflammation, including CRP, IL-6, TNF-α, IL-18 and some endothelial markers (called adhesion molecules). There’s emerging evidence of beneficial effects on oxidative stress, vascular reactivity, and hypertension. Numerous studies show that people who regularly eat nuts tend to have more favorable blood lipid profiles, and one meta-analysis of 25 clinical studies showed that nut consumption had a dose-response cholesterol-lowering effect. Interventional studies consistently show that increasing nut intake has a cholesterol-lowering effect, even in the context of healthy diets. Plenty of research suggests that, despite their energy density, nuts and seeds don’t contribute to weight gain, and they may even protect against obesity and diabetes.

The health benefits of nut and seed consumption can be attributed to their nutritional content, rich in antioxidant vitamins, essential minerals including being a major dietary source of magnesium, dietary fiber, L-arginine, and some nuts contain high levels of heart-healthy monounsaturated fats and the omega-3 fatty acid alpha-linolenic acid. Brazil nuts are fantastic sources of selenium (a relatively hard-to-get antioxidant mineral), pistachios are rich in prebiotic fiber, walnuts are high in anti-inflammatory omega-3 fats, and nuts and seeds in general tend to be good sources of copper, manganese, vitamin B1, vitamin B9, tocopherols (vitamin E), phytosterols, and phenolic compounds. In fact, nuts are often rich in the same minerals that Paleo adherents tend to be low in (especially people who don’t eat much organ meat), and in that sense, are valuable addition to the menu to help ensure nutritional adequacy.

Unfortunately, it’s common within the Paleo community to take this evidence as carte blanche to consume nuts with abandon!  Five pound bag of almonds from Costco anyone?  But, there’s some very compelling reasons to think of nuts more as a condiment and less as a staple food.

Health benefits of nut consumption do not continue to increase beyond about 20 grams per day, and there’s some evidence that consuming large amounts of nuts daily can increase disease risk (at least for stroke).  That means we get benefits with about a palmful of nuts and seeds per day but that eating more than that won’t do us any favors (and may potentially undermine our health).

Furthermore, tree nuts are one of the most allergenic foods, with true allergies (meaning the body produces IgE antibodies against proteins in nuts) estimated at about 1% of the total population and some preliminary scientific studies showing that nut intolerance (meaning the body produces IgG antibodies against proteins in nuts) may affect a whopping 20 to 50% of us. There are two ways to diagnoses allergy and intolerance to nuts.  First is to do food allergy and sensitivy testing (a blood test that looks for IgE and IgG antibodies and sometimes IgA and IgM antibodies against various food antigens) and second is to perform an elimination diet (see page tk).  If you aren’t sure, they may be worth avoiding (at least temporarily), especially for people with digestive or autoimmune disorders (see The Reintroduction Quick-Start Guide: A New FREE download!).

One study showed that cashews are one of the most common nut intolerances, affecting upwards of 50% of us. In comparison, incidence of intolerance to almonds was about 28%, Brazil nuts was 23% and walnuts was 3%. Note this study included people with gastrointestinal symptoms and did not represent the general population.

Nuts and seeds are also relatively concentrated sources of phytates. Phytate is the salt of phytic acid—that is, it is phytic acid bound to a mineral. Within the seed, the primary function of phytic acid is as a storage molecule for phosphorus, but it also serves as an energy store, as a source of cations (positive ions) for various chemical reactions in the plant, and as a source of a cell wall precursor called myoinositol. Because phytate is formed when phytic acid binds to minerals—typically calcium, magnesium, iron, potassium, and zinc—these minerals are then unavailable to be absorbed by the gut. Therefore, the consumption of phytate-rich foods like grains and legumes can cause mineral deficiencies, especially when these phytate-rich foods displace other mineral-rich foods in the diet. Our gut bacteria can liberate some of these valuable minerals from phytates for us, but their capacity is limited, which might partially explain why we cease to see benefits from nut consumption beyond 20 grams daily.

Along with blocking mineral absorption, phytates also limit the activity of a variety of digestive enzymes, including the proteases trypsin and pepsin, as well as amylase and glucosidase. This means that phytates can be as devastating to the gut barrier and gut microbiota as digestive enzyme inhibitors, namely by increasing gut permeability (by stimulating the pancreas to release excess digestive enzymes) and feeding bacterial overgrowth (by inhibiting digestion).

It’s important to emphasize that excessive dietary phytate and phytic acid are the problem. Phytates are also present in much lower concentrations in nonreproductive plant parts (like leaves and stems). Consuming phytates in more moderate quantities may actually provide an important antioxidant function and help reduce cardiovascular risk factors and cancer risk. Also, moderate consumption means that a healthy amount and variety of gut bacteria will be able to liberate some minerals from the phytate and make them more absorbable. In that sense, the scientific literature reinforces the idea that vegetables (with their lower concentration of phytates) are extremely important in our diet, whereas grains deliver levels of phytates that surpass what benefits us, and of course, nuts and seeds are great in moderation.

Nuts and seeds typically contain a large amount of polyunsaturated fats, usually the proinflammatory omega-6 fatty acids (see Why Grains Are Bad, Part 2, Omega 3 vs. 6 Fats and The Importance of Fish in Our Diets). Even the highest omega-3 content nuts (like walnuts) still have ratios of omega-6 to omega-3 fatty acids in the neighborhood of 3 to 1, and many nuts and seeds only contain trace omega-3 fatty acids. Although their omega-6 content has often been used as rationale for limiting nut and seed consumption, most evidence suggests that when these foods are consumed in moderate amounts in whole form (opposed to highly processed oils stripped of most micronutrients and phytochemicals), their net effect is antiinflammatory due to the presence of other beneficial compounds—such as vitamin E, dietary fiber, L-arginine, and phenolic compounds. In other words, omega-6 content alone doesn’t appear to be a reason to cut out nuts and seeds completely and instead reinforces the concept of moderate consumption.

Overall, nuts and seeds can definitely fit within a Paleo framework, but are best consumed in moderation (1 ounce per day) and should be avoided for people with allergies or sensitivities.

Unlike most nuts and seeds, coconut does not contain much omega-6 fatty acids. Instead, coconut is rich in Medium Chain Triglycerides (MCTs), a very special “short”-chain saturated fat with diverse health benefits (see page tk). Approximately 60 percent of the fat in coconut is MCTs.

Coconut is also a rich source of manganese, a mineral necessary for enzymes that work to protect the body from and repair damage caused by free radicals. Copper, iron and selenium are also found in good quantities in coconut, as are calcium, magnesium, phosphorous, potassium, and zinc to a lesser degree. Coconut is a fairly good source of many B-vitamins, including thiamin, riboflavin, niacin, vitamin B6, folate, and pantothenic acid. Coconut is also a source of vitamins C and E, phytosterols, and fiber.  In fact, coconut contains quite a lot of inulin fiber, a highly-fermentable soluble fiber that beneficial bacteria in our guts love! Inulin fiber is one of the most heavily studied functional fibers (see The Fiber Manifesto; Part 3 of 5: Soluble vs. Insoluble Fiber).

Coconut has long been recognized for its ability to boost the immune system, and act as an antibiotic, antiviral, antibacterial, antifungal and antimicrobial (basically small things that might make you sick don’t like coconut). It is even believed that a few times daily dose of coconut is one of the best things you can do to restore healthy gut flora (I don’t think there are any studies proving this though). It should be noted though that coconut does contain some phytic acid (although much, much lower than most tree nuts), which can be a problem for some people and does suggest that coconut too should be consumed in moderation.

Coconut oil also has diverse antimicrobial properties. Dietary MCTs have been shown to radically reduce the production of a variety of proinflammatory cytokines (meaning they reduce inflammation), increase activity of the histamine-clearing enzyme diamine oxidase (great for histamine intolerance and allergy), increase mucus production (great for gut barrier health), and support gut-barrier healing (by increasing cell-turnover rate in the gut). However, MCTs can also increase the secretion of IgA antibodies in the gut (specifically in the Peyer’s patches), which may be problematic for some people, despite all the other benefits. If you have any reaction to coconut or palm oil, switch to other healthy fats for your cooking.