You are here: Home / Nutrition / 5 “Paleo” Things That Aren’t

What’s Paleo? What isn’t? For a while now, I’ve used the basic criteria of “does it hurt or harm our health?” to answer this question (rather than the “did cavemen eat this?” rational), and it’s led me to some interesting, and possibly surprising, conclusions! As the Paleo community expands, it’s more important than ever to carefully assess our choices, rather than jumping on a bandwagon because we hear something is Paleo. Below are 5 things I’ve heard called Paleo that I believe really aren’t! 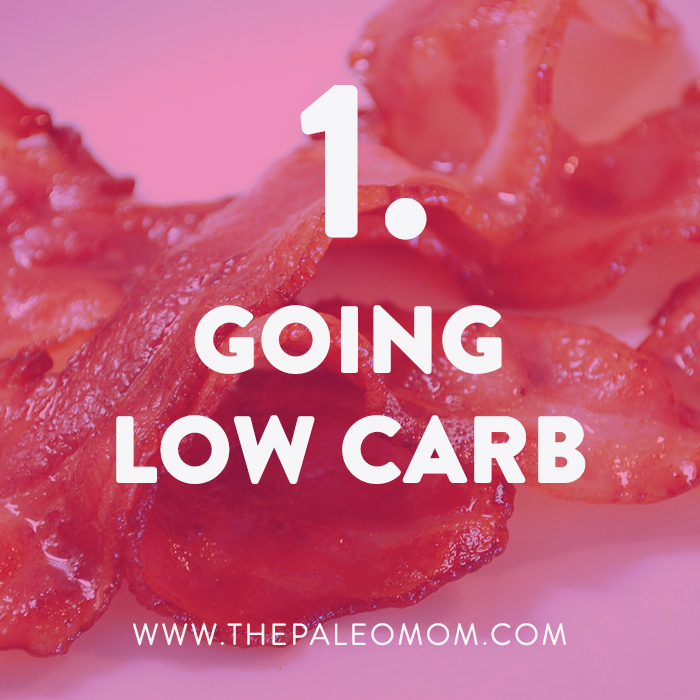 It’s easy to confuse the Paleo diet with a low-carb or ketogenic approach (many people combine these philosophies). But while cutting out grains may mean we go lower carb than the Standard American Diet, the Paleo diet is by no means strictly low-carb!

One common side effect of starting a Paleo diet is an avoidance of all carbs at all costs. This might be derived from an overly enthusiastic focus on animal foods, or simply be because we’re stumped at how to cook anything outside of a sweet potato, or it might be because we erroneously believe that all carbs are bad for us. Not so! Whole-food carbohydrates (like root vegetables, tubers, and squash) contain micronutrients, fiber and slow-digesting glucose (bound up in starch molecules) our bodies need to function (see Carbs Vs. Protein Vs. Fat: Insight from Hunter-Gatherers and 5 Weird Root Vegetables Everyone Needs to Try).  In fact, a plate teeming with plant foods is an important tenet of the Paleo template (see The Diet We’re Meant to Eat, Part 3: How Much Meat versus Veggies?).

Carbohydrate intake actually helps us perform a wide range of bodily functions, including but not limited to thyroid function, mucus production, hormonal balance and sleep. Determining your own optimal carbohydrate intake is a far better plan than just “going low carb” (see How Many Carbs Should You Eat). In fact, some people even find that denser “safe starches” like rice work well to meet these needs (see What Is a “Safe Starch?”).

Some research indicates that a low-carb approach is not optimal for many of us (see New Scientific Study: Calories Matter). If you are active, have hormonal imbalances or are dealing with a chronic illness, nutrient-dense whole-food sources carbohydrate (i.e., fruits and vegeatbles) may be beneficial to your healing (see The Importance of Nutrient Density and The Amazing World of Plant Phytochemicals: Why a diet rich in veggies is so important!). And while very-low-carb ketogenic diets have compelling therapeutic potential for epilepsy and neurodegenerative diseases, scientific studies have also shown adverse effects I believe should be important considerations when approaching this diet (see Adverse Reactions to Ketogenic Diets: Caution Advised).

The bottom line? The Paleo diet is NOT automatically a low-carb diet! 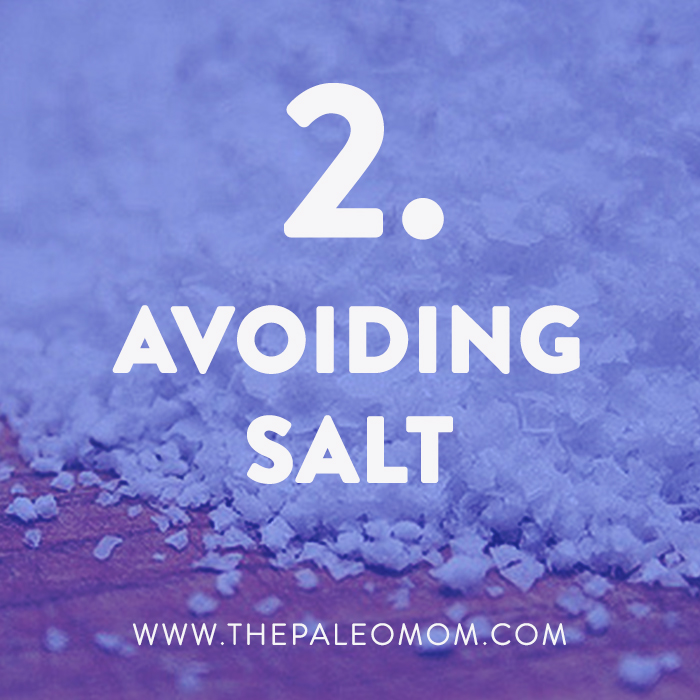 We’ve all heard the line that “salt raises blood pressure” and should be avoided. And since Paleo is all about improving our health, salt is obviously out, right? Somehow, salt (or more specifically sodium) has been lumped in with saturated fat and sugar as a scourge of modern diets. But salt has been mined (and cherished) for thousands of years, and actually gave us the ability to preserve and eat foods across the seasons. And, unsurprisingly, it’s perfectly okay in the Paleo diet within moderation.

Sodium (table salt is sodium chloride) is an essential nutrient. It’s vital for cellular function, nutrient absorption in the digestive tract, kidney health, adrenal function, and cardiac health. And, because sodium is an electrolyte (a special type of mineral that carries an electrical charge), it also plays a role in maintaining a normal blood pH, regulating the amount of water in your body, conducting nerve impulses, and controlling muscle contractions (including those of your heart!).

The most common criticism of salt is that too much of it raises blood pressure, in turn elevating our risk of having a heart attack or stroke. But, this isn’t exactly true! Research shows that sodium reduction only has a modest impact on blood pressure (and cardiovascular outcomes) (see Is Salt Paleo?).

In general, research indicates that “high” salt intake may increase risk of stomach cancer and inflammation in general. However, “high” is defined as about 4 teaspoons a day! And, conversely, research has shown that eating too little salt can also increase risk of death.

So, should you stop eating salt? The answer is definitely no! As long as you’re eating a moderate amount (3 to 7 grams of sodium per day, about 1 to 2.5 teaspoons of salt per day), are consuming a wide variety of potassium-rich foods (magnesium and calcium too!), and are choosing good quality salts like Himalayan salt for the extra trace minerals, there’s no reason to avoid salt (or actively worry about consuming too much). The literature reinforces the fact that salt and health risk form a U-shaped curve, with too little being just as harmful as too much. Your best bet is to keep some in your diet and enjoy both the flavor and micronutrient boost it gives your food! 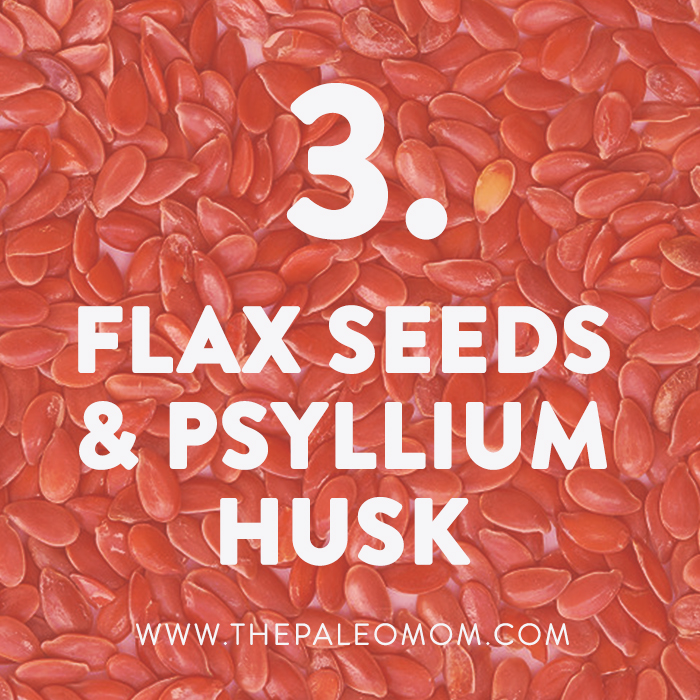 Both these ingredients have gained traction as Paleo baking staples in the last several years. Their unique type of fiber helps them bind together recipes, making them a helpful replacement in egg-free and grain-free baking. But both are what I consider “not worth it” when it comes to our diet!

Flax seeds and psyllium husk are largely made of mucilaginous fiber (see Mucilaginous Fiber: The Good, The Bad, and The Gooey and The Fiber Manifesto—Pt. 2 of 5: The Many Types of Fiber), which lends them their unique “gooey” texture when exposed to water. They’re able to draw in that water, making them effective stool softeners, and psyllium husk in particular is often prescribed to promote regularity and even assist with weight loss.

However, there’s a dark side to mucilaginous foods. For certain forms of gut dysbiosis, mucilage might actually feed the wrong bacteria and consequently worsen gut health instead of improving it. There’s no evidence that eating a diet rich in mucilages can cause gut dysbiosis if you’re starting out with a healthy and diverse gut microbiome. But, this may explain why so many people report worsening of gastrointestinal symptoms or symptoms of autoimmune disease when they eat foods like psyllium and chia.

Plus, since psyllium husk expands when introduced to water, it can cause bezoars—masses of material that obstruct the gastrointestinal tract.  It has also been shown to increase colon cancer progression in people already at risk (see The Verdict on Psyllium Husk: Not Paleo!). That’s just not ideal!

But aren’t flax seeds a good source of Omega 3’s? While flax seeds are genuinely touted as helpful sources of these essential fatty acids, the animal forms of Omega 3’s found in fatty fish, grassfed and wild meats and eggs (DHA and EPA) are the forms are bodies can actually use (see TPV Podcast, Episode 88: Omega 3’s). Plus flax seeds are extremely high in phytoestrogens (about six times higher than soy beans!). While occasional consumption is probably harmless, I don’t believe habitual consuming them is worth the risk. 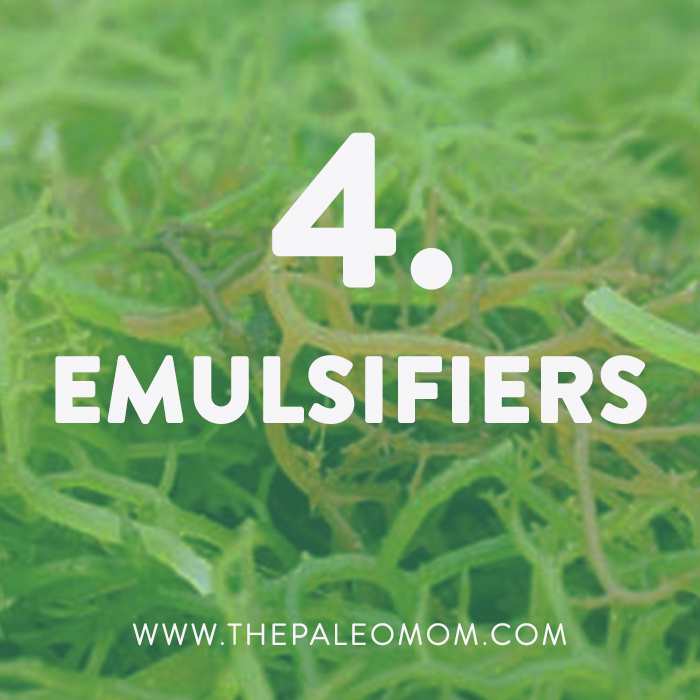 While we’re talking about common “Paleo” food additives, let’s tick a few more off the list: Guar Gum, Carageenan, Cellulose Gum, Xanthan Gum and Lecithin. All five are commonly used as stabilizers in gluten free and even Paleo-labeled products, but I wouldn’t consider any of them PPaleo (see Is It Paleo? Guar Gum, Xanthan Gum and Lecithin, Oh My!)! Why? First, let’s talk about where you might find them.

In short, these additives are not ideal because (with the exception of lecithin) they’re likely to wreak havoc on our guts. Guar Gum and Carageenan are known to increase intestinal permeability, and Xanthan Gum, Guar Gum and Cellulose gum can cause bacterial overgrowth or growth of icky bacteria like e-coli. In fact, some of these food additives are banned, at least for specific uses, in other countries. Lecithin, while not a gut irritant, does promote inflammation, making it a no-go in my book. Again, occasional consumption of lecithin is unlikely to be problematic, but that doesn’t mean it gets a green light for commonly consumed Paleo products!

Convenience foods make everyone’s life easier, but as more and more packaged goods get marketed to the Paleo community, it becomes more and more important to empower you to read labels and determine the merits of a particular product or recipe for yourself. These additives aren’t Paleo! 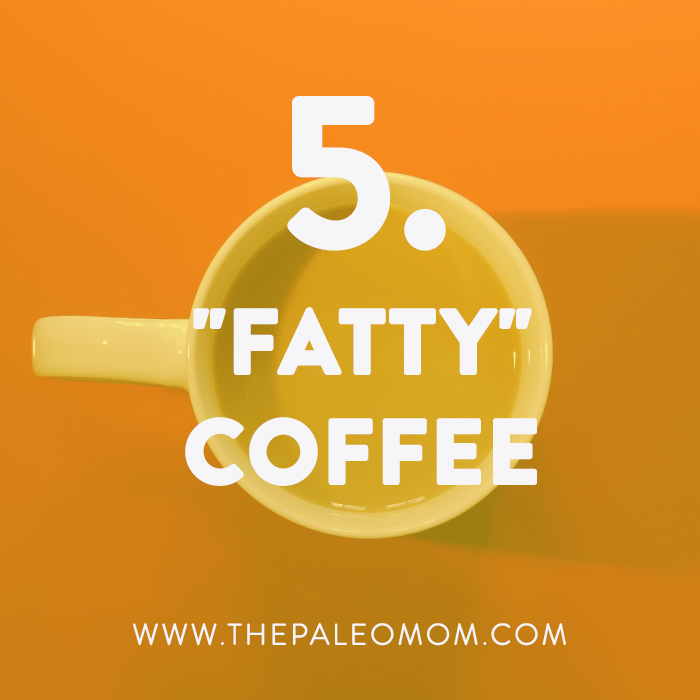 Now we come to one of the most commonly popular myths tied up with Paleo. Blending your coffee with several tablespoons of butter, MCT Oil, ghee, coconut oil, or another fat as a breakfast replacement is definitely not a required part of the Paleo diet. In fact, before we choose to do so, I think there are some important things we ought to know!

Firstly, it’s important for us to understand our own individual tolerance when deciding whether coffee (even plain coffee) is a good choice for us. For some individuals, the cortisol spike provided by coffee may be harmful to their overall stress hormone levels. For others, it may trigger an immune reaction and exacerbate the symptoms of autoimmune disease (see The Pros and Cons of Coffee).

Second, I don’t believe that fasting instead of eating a nutrient-dense breakfast (even when your fast contains several hundred calories worth of fat in the form of a fatty coffee) is ideal for most people. While it may be a beneficial way for healthy people to “listen to their bodies,” for those with a history of adrenal dysfunction or metabolic derangement, it might be equally detrimental (see Is Breakfast Really The Most Important Meal of the Day? and Demystifying Adrenal Fatigue, Pt. 1: What Is Adrenal Fatigue?).

Finally, I think it’s important for us to view breakfast as another opportunity to consume nutrients. It’s a chance to work toward that ultimate goal of 14 or more servings of veggies a day, another chance to eat some organ meat, and a chance to reenergize our body with vitamins, nutrients and phytochemicals. Very few of these things can be found in a “bulletproof” coffee. However, I will admit that I very much enjoy including some Pure Indian Foods Coffee ++ ghee in my morning coffee, along with some Vital Proteins Collagen Peptides. I’m just careful to make sure this isn’t the extent of my meal, and I limit my additions to about a teaspoon of added fat rather than two or more tablespoons. It’s all about balance!

There you have it: the top 5 things we erroneously think are Paleo. What else are you confused about? Let me know!